It's time to dump the Royal British Legion's red poppy 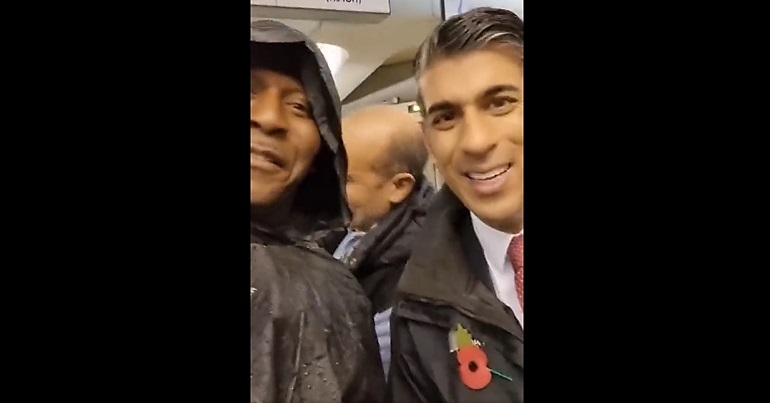 Rishi Sunak has been out supporting the Royal British Legion’s red poppy appeal. No surprises there from the right-wing prime minister. However, if you don’t want to shore up the right-wing militarism that the red poppy represents, then you can buy a white one instead.

As London Live tweeted, the PM was out at Westminster tube station on Thursday 3 November selling red poppies for the Royal British Legion:

He joined several Army personnel and civil servant Stephen le Roux to raise money for the Royal British Legion’s annual #PoppyAppeal at around 8am on Thursday.#RishiSunak pic.twitter.com/OYyyVWleiv

Of course, the prime minister’s job includes unquestioning subservience to the military industrial complex – while systematically neglecting veterans of imperialist wars. This is exactly what the Royal British Legion does too. As the Canary‘s Joe Glenton recently wrote, the Legion:

is the most monolithic of the military charities. Despite claims to the contrary, the Legion has embodied right-wing, establishment politics from its foundation in the early 1920s.

One of the main figures associated with it was field marshal Haig, known as the ‘Butcher of the Somme’ because of the massive death toll of his WW1 battles. As I explained in my book, Veteranhood: Hope and Rage in British Ex-Military Life, the Legion was a bulwark against radical working class politics. Haig wanted veterans of WW1 “back under their officers” – not engaged with the left-wing politics of the day.

One trade union leader of the time called the Legion “Haig’s White Guards” after the anti-Bolshevik forces fighting to crush the Russian Revolution. Elements within the Legion also wanted to help break the 1926 General Strike. And, as I reported in Veteranhood, the legion tried to have jobs performed by foreign and women workers given to veterans. So, the British Legion has always been a right-wing organisation.

Aside from the problems with the Royal British Legion, there are also those surrounding the red poppy itself.

In 2012, Assed Baig wrote for HuffPost on why he does not wear a red poppy. He noted that it was a “nationalistic and a patriotic symbol” of remembering “our” dead soldiers. The colonialist overtones are explicit. As Baig said:

I recently received a letter from the Royal British Legion, with images of soldiers that have suffered injuries. The images were accompanied with captions reading; “They are just boys. But they are our boys”. They are not my boys or ‘our’ boys. This may sound harsh to some, but they knew what they were signing up for, they went to fight in an occupation of a foreign land. If they get injured in the process it is the government’s responsibility to take care of them, not for them to rely on the charity of the public

The poppy is used as a tool to promote current wars. It is not used to say ‘never again’ as it should be. Politicians use it to beat down opposition to war whilst questioning people’s loyalties and patriotism. The symbol of the poppy was never intended for peace or to stop war, it was a cry for others to take up arms and take revenge in a poem by John McCrae. The gentleman whose idea it was to start the poppy, General Earl Haig, was responsible for gross incompetence on the battlefield in which thousands perished.

And as he summed up:

I don’t wear a poppy, hoping that people will move away from jingoism and realise that it is not a symbol of respect and honour for the dead, but by wearing it and accepting the current narrative, it does the opposite – it glorifies and promotes war.

However, there is an alternative to the war-supporting red poppy.

The white poppy has existed since 1933. Currently, the Peace Pledge Union (PPU) is responsible for it. The organisation has:

been promoting pacifism since 1934, in alliance with other pacifists around the world. We also work with other peace and human rights campaigners.

The PPU says that since its inception, it:

has been campaigning for a world without war. Today we challenge systems, practices and polices that fuel war and militarism and that contribute to the view that armed force is an effective agent of social change. Such systems and beliefs impede the emergence of nonviolent approaches to conflict.

The white poppy is part of that. It is a strong symbol of anti-militarisation, peace and equality. Naturally, the establishment has smeared people who wear them – including some MPs. Now, the PPU union has updated the white poppy’s design – and it looks great.

The union made a video about the new poppy:

The PPU said in a statement that:

As the white poppy campaign has grown over time, we have become increasingly aware of the need to minimise our impact on the environment and ensure white poppies are ethically produced. The PPU has worked closely on the project with Calverts, a workers’ cooperative based in East London specialising in environmentally responsible print and design.

The new design keeps the traditional look of the white poppy, with two layers of petals and a green centre. It is paper-based, with a folded, self-fastening design, dispensing of any non-recyclable materials.

So, for anyone who opposes war, right-wing militarism, and classism – but supports peace, unity, and equality – the PPU’s white poppy should be their default choice this Remembrance Day. You can get yours here.