Andrew Marr shows his bias once again, this time over refugees 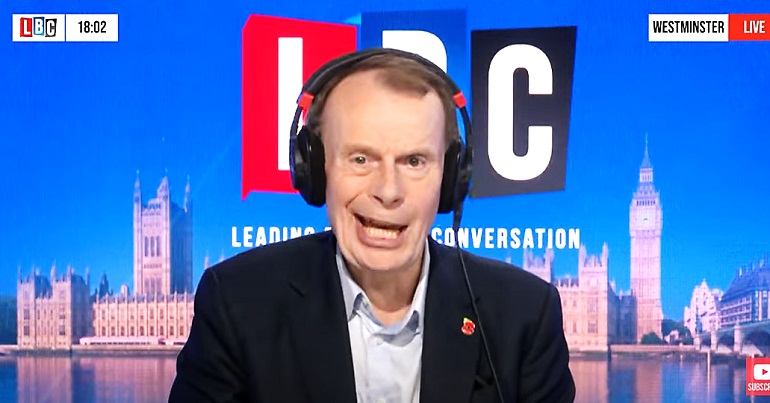 The leopard that is Andrew Marr hasn’t changed his spots. After the BBC ended the infamous Andrew Marr Show, the host transferred his debatable skills to LBC. But nothing has changed when it comes to this presenter’s bias – as his latest programme demonstrates.

Marr: a history of bias

Marr had a history of government bias at the BBC. It started in his early days, nauseatingly praising Tony Blair’s illegal invasion of Iraq:

More recently, he’s been little more than a stooge for successive Tory governments. He undermined Jeremy Corbyn back in 2016, propped up Theresa May’s government in 2017, and refused to call Boris Johnson a liar when we all knew he was one.

However, one of his most insidious pieces of government propaganda was during the coronavirus pandemic – repeating a lie from then-chancellor (and current PM) Rishi Sunak. Sunak repeatedly claimed that the government borrowed billions of pounds during the pandemic. This was not true: the Bank of England created the money for the government.

Not to tarnish his record, Marr has carried on this government boot-licking over at LBC, where he has a new gig – and the propaganda he pushes is still just as toxic.

On Wednesday 2 November, Marr was hosting his weeknight show. On it, he was talking about the current, Tory-instigated refugee crisis and abuses at the now-illegal Manston detention centre. However, Marr still tried to blame the left while at the same time praising right-wing Keir Starmer.

The host smeared the left in one fell swoop during his opening monologue. He said:

In the old days, the left didn’t much like talking about immigration. Immigration was for right-wingers, and closet racists, and xenophobes. Well, how times change. In the Commons today, the Labour leader Keir Starmer used every single one of his questions to Rishi Sunak to hammer him on the Tories record on illegal immigration.

Andrew Marr points out that the Left didn't like talking about immigration in the past, but today Sir Keir Starmer used "every single one of his questions to Rishi Sunak to hammer him on the Tories' record on illegal immigration".@AndrewMarr9 pic.twitter.com/yLVDqCkylO

Marr’s point that the left doesn’t talk about the subject is demonstrably false – whichever way you look at it.

The right wing of the Labour Party has always toed the Tories’ racist line on refugees. As the Canary recently reported:

For example, in 2015, people – including MPs – criticised Ed Miliband’s party for its “controls on immigration” mug… In 2002, former home secretary David Blunkett defended a planned Labour policy of educating refugee children separately. He said that this would prevent child refugees “swamping the local school”. It was Labour that opened the horrific Yarl’s Wood refugee detention centre in 2001… And while we all lose our shit over Braverman using “invasion” to describe refugees fleeing to the UK, let’s not forget that hallowed Labour leader Clement Attlee called the Windrush migration an “incursion”.

However, the left wing of Labour has always defended refugees. Not least in this was Jeremy Corbyn – who, despite Marr’s claims of ‘times changing’ under Starmer, dedicated a whole Prime Minister’s Questions (PMQs) on 1 February 2017 to questioning then-PM May about refugee policy:

Corbyn also asked questions of prime ministers before and during his time as Labour leader. Of course, that’s irrelevant to Marr – as one Twitter user summed up:

He’s telling on himself.

So, once more, Marr shows his bias against anything remotely left wing. This bootlicker extraordinaire is a menace to democracy and the media. No wonder the corporate press keep giving him jobs.