Striking CWU workers can't do it without your help 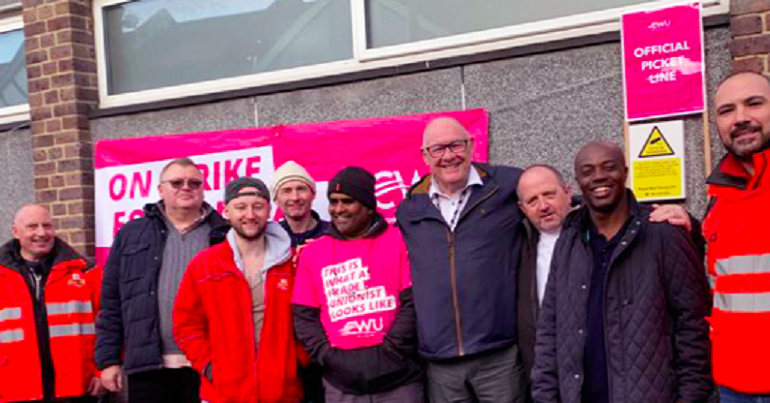 The Communication Workers’ Union (CWU) has been at the forefront of industrial action against the Tory government and its capitalist supporters this year. It has scared the living daylights out of Royal Mail and taken huge action against BT. However, the CWU cannot do this work in isolation – and it needs your help to continue its crucial industrial actions.

The Canary has been following the CWU’s work this year. Over at Royal Mail, workers have been striking over the company’s dire pay offer of nearly half the rate of inflation. After Royal Mail announced 6,000 redundancies and 4,000 job cuts, the company then threatened the CWU with a legal letter. It was over a tiny technicality in the strike action, and the CWU had to cancel its strikes. However, the union wasn’t having it – it immediately sorted the situation and announced more strikes.

Meanwhile, the CWU has also been showing BT what’s what. Around 40,000 members in call centres and Openreach held repeated strikes against (again) dire pay and working conditions. Much like Royal Mail, BT has offered workers a paltry pay rise below inflation. As the Canary previously reported, BT made over £1bn in profit. So, workers have been striking – with a small measure of success. BT has agreed to get back round the table to talk with the CWU. We’ll have to see if a resolution comes out of the negotiations.

However, workers cannot keep striking and fighting the bosses without our support. So, the Canary asked the CWU Newcastle branch how our readers could support its members locally and nationwide during industrial action – aside from sharing news on social media and attending pickets.

Support the workers if you can

You can donate to the union’s strike fund via PayPal here. But it knows this platform isn’t accessible for some people. So, the CWU Newcastle Amal branch told the Canary:

Individuals can donate by making a payment to the CWU General Fund and referencing Welfare Fund with the payments. Payments can be made via bank transfer to the following account;

Of course, it goes without saying you should only financially support the CWU if it won’t hurt your own finances. Supporting them in person at strikes and on social media is also vital.

It is crucial that we back the CWU workers. Royal Mail CEO Simon Thompson has already warned workers that he’ll make more of them redundant if they continue to strike. And while the overtones from BT look slightly better, that could change at any moment. So, striking workers will surely appreciate anything you can give.

This article is thanks to a Canary reader’s email.