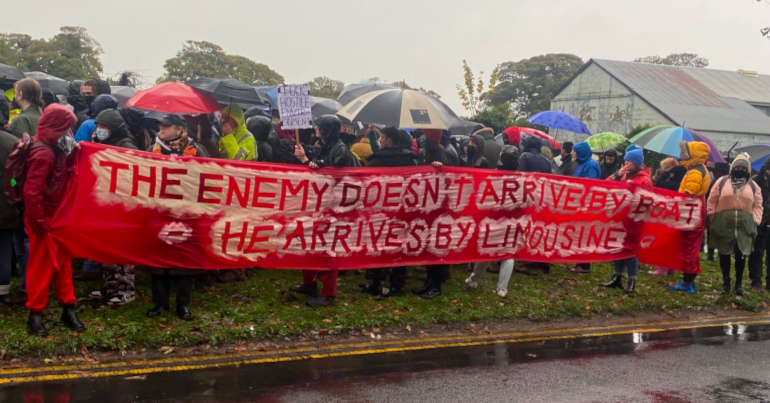 On Sunday 6 November, hundreds of people from around the UK travelled to the Manston Airport refugee processing centre to protest the squalid conditions that migrants are forced to survive in.

The centre – which is in a former military camp – has come under increased scrutiny since grassroots campaigners photographed conditions at the Camp on 30 October. The situation intensified after the Home Office moved hundreds more people there from Dover on 1 November. These 700 people were relocated after a racist firebombing attack. Home secretary Suella Braverman chose to respond to the attack by proclaiming to parliament that there’s supposedly an “invasion on our southern coast”.

The Manston Airport camp has the capacity to hold a maximum of 1,600 people, but up to 4,000 people have been crammed into it. This has caused outbreaks of MRSA, diphtheria and scabies.

The camp is only intended for people to stay in for 24 hours. However, refugees have routinely been forced to stay there in marquees and on mats on the floor for over a month.

Detention Action has launched legal action against Braverman over conditions at Manston.

People tweeted from the demonstration on Sunday:

Some of many placards at protest outside #Manston immigration detention centre, Sunday 6 Nov. pic.twitter.com/PMbz4MzafQ

The demonstration was a passionate and angry show of resistance and saw protesters braving the pouring rain to shake the gates of Manston. Mint Press News tweeted this video from the day:

Hundreds of people gathered yesterday outside the Manston detention camp in Kent, England.

The site is a former military base which has been re-purposed to detain refugees and migrants in tents. pic.twitter.com/zaZrkFU3db

“Tomorrow we keep up the fight”

On 7 November, several demonstrators reflected about the day. According to communications worker for the Joint Council for the Welfare of Immigrants Nadia Inha:

Joined 100s of others protesting outside Manston yesterday.

Felt hopeful seeing how many people were willing to journey for hours, give each other lifts, & stand in the pouring rain to show solidarity w/ & demand freedom for people detained. pic.twitter.com/D1lNGSEfny

The Right to Remain campaign thanked those who took part:

We stand in solidarity with our fellow organisers and campaigners protesting against the inhumane conditions at Manston.

Meanwhile, another campaigner commented on the power of collective resistance:

The demo outside Manston yesterday was a reminder- solidarity is beautiful, collective struggle is beautiful ❤️‍🔥 Today we rest, but tomorrow we keep up the fight to shut down Manston and every other detention centre and prison ✊️ pic.twitter.com/0IISMY1Zd1

Like almost everything else in the UK, accommodation for refugees is a for-profit business. Manston processing centre is run by private company Mitie,

Mitie manages 50 % of the UK’s migrant detention capacity, including the Manston camp. The company recently reported record profits of around $4 billion, up 58% in just one year. It also supplies guards that enforce Home Office deportations.

Corporate Watch‘s research shows that Mitie is owned by Stephen and Caroline Butt, through their Silchester Group of companies. Stephen Butt is one of the 200 richest people in the UK, while Caroline Butt has donated tens of thousands of pounds to the Tory party. Meanwhile, the people housed in Manston processing centre – and Mitie’s other Home Office accommodation – are in dire conditions.

Global Women Against Deportations acknowledged the achievement of the people of the camp in exposing the horrendous conditions. It said:

Credit must go first of all to the children, women and men who, at great risk to themselves, exposed the horrendous conditions at this camp.  We know that 70% of women asylum seekers fled rape and other sexual violence so that means that there must be traumatised survivors suffering further abuse in Manston. The overcrowding and inhumane conditions are not an accident, or a blunder, it is a deliberate racist government policy aimed at preventing people from claiming asylum, sowing division and fuelling hatred against people fleeing wars and starvation. But the mounting outcry has revealed a growing movement of people determined to defend the rights of asylum seekers and in doing so defend us all against a cruel government that treats us like our lives don’t matter.

A call for abolition

Action Against Detention and Deportation, one of the groups which organised Sunday’s demonstration, released a statement calling for the abolition of the UK’s detention system:

The humanitarian disaster at Manston detention camp is the sharp end of a violent and racist border regime that punishes people seeking safety and a better life in the UK. Treating people fleeing war, poverty, persecution and climate breakdown this is barbaric. We’re glad that our exposure of the inhumane conditions there has provoked public rage and solidarity, with increasing numbers now being released. The cries of “freedom” and “we need your help” from detained children have stirred people to action. But we won’t stop until the place is shut down, and immigration detention as a whole is abandoned for good.

We need to stand in solidarity with all those detained by the UK government and facing deportations. We should prioritise supporting the struggle against the UK’s racist border system. Ultimately, this is an abolitionist struggle – one which demands a complete end to the UK’s racist border regime and all of the violence associated with it.