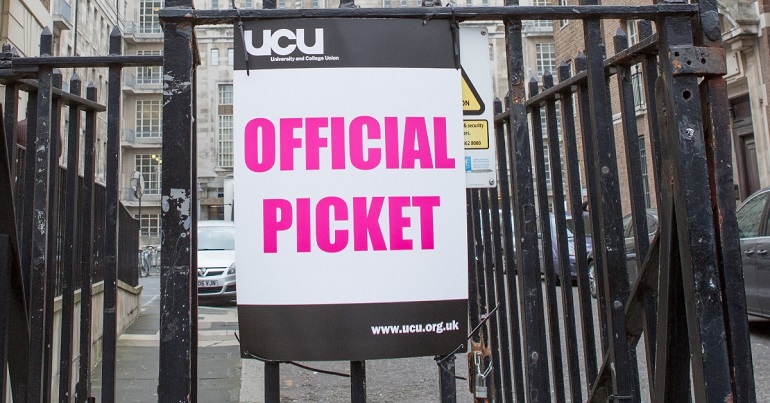 University and College Union (UCU) members are to strike across three days before the end of the year. The action will be the biggest in the union’s history. However, the UCU strike poses the question of whether it’s time for unions to call a general strike across the UK.

As the Canary previously reported, university bosses have cut workers’ real-terms pay by around 25% since 2009. The pension fund that manages university workers’ retirement pots has also been acting appallingly – cutting up to 35% off people’s final pension income. This element has been particularly dire. Pension managers claimed that the workers’ overall fund had a shortfall of £14.1bn – meaning they had to cut the amount of people’s final pension payouts. However, this shortfall then shrank to £2.9bn – but bosses still claimed they had to cut the fund. Then, the shortfall was nothing – and finally, in October, the UCU revealed that actually the fund would be in surplus. Yet despite all this, bosses still want to cut workers’ pensions.

However, the action is not just about pay. As Union News wrote, workers want:

an end to race, gender and disability pay injustice; a framework to eliminate zero-hours and other insecure contracts; and meaningful action to tackle unmanageable workloads

Workers at individual universities have taken industrial action for many months this year. Strikes had to be carried out at individual campuses because the UCU couldn’t meet the legal threshold for a national strike. That’s now changed.

As the Canary previously reported, UCU balloted its members for a national strike on the issues of both pay and pensions. The result was a ‘yes’ – so, UCU wrote that:

Over 70,000 university staff at 150 universities will strike for three days later this month over attacks on pay, working conditions and pensions. The National Union of Students (NUS) has backed the strikes, which will be the biggest ever to hit UK universities and could impact 2.5 million students.

Pay is central – bosses have imposed a 3% rise this year, which is of course an effective cut, given inflation. The UCU is demanding a “meaningful pay rise” to support workers with the cost of living crisis. The union also wants bosses to act over pensions. It says they must “revoke the cuts and restore benefits”. UCU general secretary Jo O’Grady said:

This is not a dispute about affordability – it is about choices. Vice-chancellors are choosing to pay themselves hundreds of thousands of pounds whilst forcing our members onto low paid and insecure contracts that leave some using foodbanks. They choose to hold billions in surpluses whilst slashing staff pensions.

UCU members do not want to strike but are doing so to save the sector and win dignity at work. This dispute has the mass support of students because they know their learning conditions are our members’ working conditions. If university vice-chancellors don’t get serious, our message is simple – this bout of strike action will be just the beginning.

However, the bigger picture here is that government and capitalist bosses are effectively causing the UK to grind to a halt – from the NHS, to education, via postal and phone/internet services, the London Underground and Heathrow airport. Surely now is the time for unions to call a general strike – after all, it’s getting towards the point where we’re in one, in everything but name.

Featured image via the UCU