Underground strike due to 'politically motivated' attack by the Tories 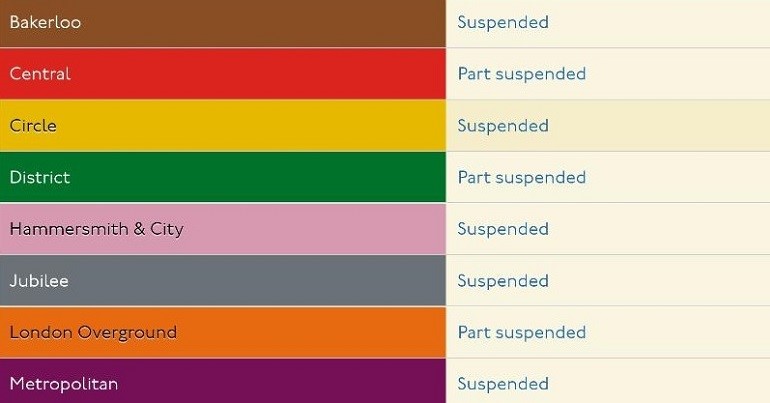 National Union of Rail, Maritime and Transport Workers (RMT) members were striking on the London underground on the morning of Thursday 10 November. The reason is simple: once again, bosses are attacking workers’ rights. However, this time the strikes are less about pay and more about the Tory government interfering in Transport for London (TfL) – and TfL capitulating.

London underground: at a standstill

Early on 10 November, striking workers shut down most of the tube network:

Power to the workers. An almost total shut down, once again. #TubeStrike pic.twitter.com/mhpZ8aaAr6

The RMT is taking action over pensions, redundancies and changes to staff working conditions. It tried to make a last-minute deal with TfL on Tuesday 8 November. However, the company rejected the RMT deal. So, underground workers have walked out. As one worker tweeted:

Planned cuts could see 19 posts at my station axed, as part of a raft of job cuts across the Tube. Proposals for pension reform could add 5-8 years to the age at which I can retire. That’s why I’m on strike today. If you want a well-staffed Tube, support us. #TubeStrike @RMTunion https://t.co/mQBqGwBT6M

The situation that has caused RMT workers to strike is complex, but the union summed it up well on Twitter.

First, the RMT noted that the Tory government is at the root of the problem:

Our members are angry that cuts to jobs, conditions and pensions are being pushed through by people who know it’s wrong and unnecessary, as a consequence of the Tory government’s politically motivated attack on London.#TubeStrike https://t.co/rxyWTiA6QI

This “politically motivated attack” on the underground stems from the coronavirus (Covid-19) pandemic. As the Guardian noted:

TfL’s finances were wrecked by the coronavirus pandemic, with its budget mostly dependent on tube fare revenue. Ridership sank to 4% of normal levels in 2020 and has only recovered to around 70% of 2019 weekday levels.

The government stepped in to plug the revenue shortfall. However, in August a new deal it made with TfL had conditions. As the RMT noted, these include forcing:

These conditions are underwritten with the threat to remove funding if TfL fails to comply.

So, TfL complied. The RMT says the result of this is bad for underground workers:

Our members are angry that cuts to jobs, conditions and pensions are being pushed through by people who know it’s wrong and unnecessary, as a consequence of the Tory government’s politically motivated attack on London.#TubeStrike https://t.co/rxyWTiA6QI

Specifically, the RMT says the deal will result in:

Crucially, the RMT says TfL is not blameless in this. It claims the company was previously against the government’s pension plans:

On pensions, the case for ‘reform’ is dead. Here is @TfL saying, basically, 'the unions were right all along, we should have waited for the valuation.' ⬇️#TubeStrikehttps://t.co/nzOFYW0Oxb pic.twitter.com/2fjXv62sld

That @TfL pensions paper again – here they are saying that the reforms demanded by government, which they have to agree with the DfT in January, are unacceptable and will leave members worse off than other public sector workers. ⬇️#TubeStrike https://t.co/nzOFYW0Oxb pic.twitter.com/ZtjIaRizvt

Here is the @MayorofLondon saying on 24th June “I’m quite clear I’m not persuaded that there are any grounds to change the pensions of those who work for TfL.” ⬇️#TubeStrike https://t.co/HbbnGEkhUb pic.twitter.com/p45shmr3bl

However, both have now caved to the Tory government’s demands. So, RMT underground workers have been left with no choice but to strike.

The union is demanding that TfL:

The RMT had some choice words for TfL and Khan, too:

The Mayor and TfL should stand firmly with their workers, the people who kept London’s transport services moving during the pandemic. Instead, they are allowing London Underground managers to cut jobs and undermine employment conditions on the Tube and they continue to indulge the government’s spiteful raid on the TfL pension scheme.

However, with a funding shortfall and the Tories on the counter attack, it is unlikely that TfL will back down anytime soon. So, expect more RMT underground strikes as the union is again forced to defend its members – and workers are forced to fight for their basic rights.