Greece is under a general strike against the government 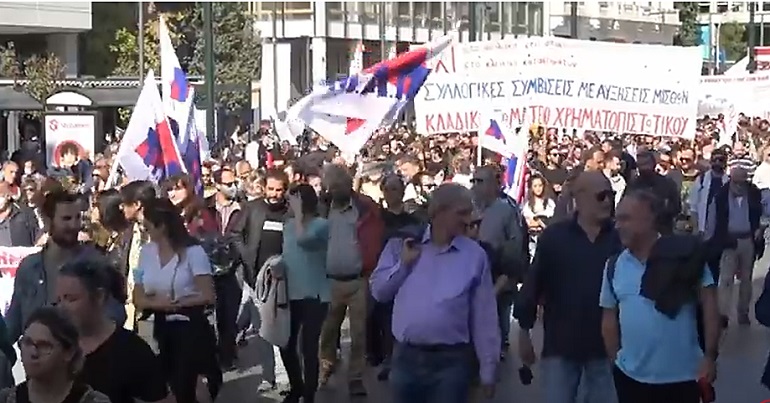 Workers are currently striking across the UK, and across industries. However, so far, these strikes are taking place in isolation. So maybe UK trade unions could take a leaf out of their Greek counterparts’ books – because there, workers have currently downed tools in a general strike.

As Agence France-Presse (AFP) reported, public transport in the Greek capital was severely disrupted on Wednesday 9 November. Athens’ normally busy roads were all but empty, with the walkout affecting bus, underground, tram and suburban train services, as well as taxis. Boat services from the mainland to the Ionian Islands and those in the Aegean Sea were also halted by the industrial action. Meanwhile, TV and radio news went off air. This is all happening because unions called a general strike in protest over price hikes amid spiralling inflation.

the strike [was] announced by the General Confederation of Greek Workers (GSEE), the Civil Servants’ Confederation (ADEDY), and the All-Workers Militant Front (PAME).

It is the second such strike in Greece since September, when workers brought public transport to a standstill. Energy-linked price hikes have sent inflation to its highest rate in three decades in Greece. ADEDY said in a statement:

Our country’s workers, both in the public and in the private sectors, are battling against the high prices that are strangling households and citizens

AFP reported that a poster from the GSEE read “The cost of living is untenable” and “social protection for all”. Several unions have called rallies around the country for later in the day.

Prime minister Kyriakos Mitsotakis’ government has announced a €5.5bn package of aid. This includes a €250 subsidy to 2.3 million vulnerable citizens in December, and an increase in the student housing allowance. However, the unions insist on the need for salary rises, not hand-outs, amid 12% inflation in September. ABC News reported that:

Greek unions are demanding lower taxes and an increase to the minimum wage, which currently stands at just over €700 per month for salaried workers.

€700 is about £614. Whilst the Greek strikes are not across all industries, and the social situation in the country is different to the UK’s, they do show unions working together. So far in the UK, we’ve seen cross-union support for each other’s struggles but no coordinated action.

Maybe it’s time that UK workers demanded their unions follow their Greek comrades – and truly get ‘everybody out’.