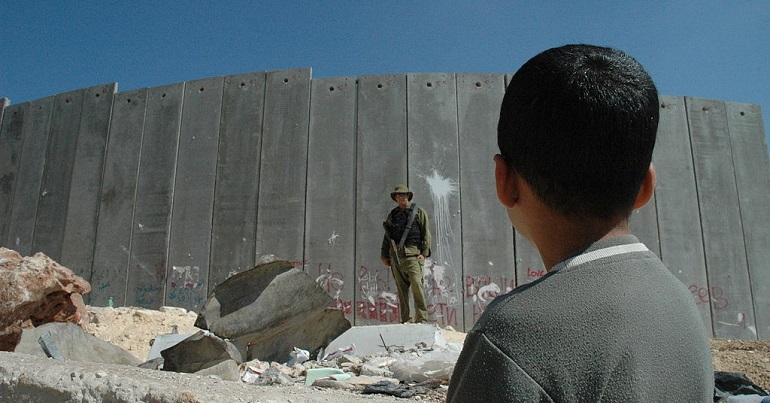 On 7 November, Israeli forces used a bulldozer to demolish a bakery run by the family of Palestinian resistance fighter Udai Tamimi. Palestinians reacted on Twitter:

Israeli bulldozers demolished a bakery in Shuafat refugee camp in occupied Jerusalem this morning. The bakery belongs to the family of Udai Tamimi, a 23-year-old Palestinian who shot dead an Israeli soldier before he was killed in October. pic.twitter.com/NG71syhcYc

Palestinian media said that the demolition was an act of collective punishment for Udai’s attack on an Israeli military checkpoint close to the Shuafat refugee camp near Jerusalem last month. Udai shot one Israeli soldier dead and injured three others. The Israeli military besieged the camp hunting for him.

Udai was eventually killed during a second attack on a security guard at the colonial settlement of Ma’ale Adumim, 11 days later.

The demolition of Udai’s family’s business comes as the Israeli state is stepping up its policy of punitive demolitions against the homes and property of Palestinian resistance fighters. On 8 November, the Israeli army’s chief of staff approved the demolitions of the family homes of two Palestinians who were killed by Israeli forces in September 2022, after they had killed an Israeli soldier. Israeli forces have also been preparing to destroy a house in Hebron owned by Mohammed Jabari, who killed a settler and wounded five others earlier this month, during an attack which took place outside the house of extremist Israeli settler and Knesset member Itamar Ben-Gvir.

Palestinians stand with the fighters

Udai Tamimi’s resistance has led him to be hailed as a hero by many Palestinians. Marches and strikes were held across Palestine after news of his death was broadcast. Palestinian writer Omar Zahzah wrote about Udai and other martyred Palestinian resistance fighters for Electronic Intifada:

The examples of Palestinian heroes such as Ibrahim al-Nabulsi, Islam Sabbouh, Udai Tamimi, and Tamer al-Kilani suggest that Palestinian armed resistance is not going away soon. Indeed, it seems to have become a vital component of a broader pattern of collective resistance to Zionist settler-colonialism.

Palestinian armed resistance to Israel’s occupation has gathered momentum apace since the establishment of the Lion’s Den armed group in Nablus earlier this year. The Israeli response has been to besiege the city of Nablus, while the Palestinian Authority (which co-operates with the Israeli occupation forces) has also been attempting to stamp out the group.

The Lions Den draws its support, and its fighters, from a cross section of the different Palestinian factions. For example, Tamer Al-Kilani – a Lion’s Den member who was assassinated by an Israeli motorcycle bomb on 24 October – was a member of the Left-wing Popular Front for the Liberation of Palestine:

PHOTO: Supporters of the Popular Front for the Liberation of Palestine in Gaza City participate in a symbolic funeral for Tamer al-Kilani, who was killed in an explosion in the West Bank city of Nablus the previous day, 24 October. #PalestineInPictures https://t.co/D6Tkk2XVUt pic.twitter.com/rev0vjQ12E

A problematic narrative of non-violence

Omar’s article criticises colonial narratives, which – he says – only see Palestinian resistance as legitimate if it is non-violent. He argues:

As Palestinian militancy grows, it’s important to revisit problematic and dehumanizing notions of Palestinian “nonviolence” as the exclusively acceptable form of resistance. My issue is not with nonviolent resistance as such (again, liberation struggles require a diversity of tactics) but the limiting ways in which it can be taken up in advocacy for Palestine.

More specifically, I believe there is a problematic, obsessive iteration of “nonviolence” within the broader Palestine solidarity movement that dehumanizes Palestinians, normalizes Zionism, and ultimately utilizes racist and colonial frameworks to advance the notion that the means of Palestinian resistance are more troubling than the reality of Zionist settler-colonialism.

Sparking a new era of resistance

Fighters like Udai are trying to spark a new era of resistance through their actions. After his attack on the checkpoint, Udai wrote:

After Udai’s death, the Israeli state quickly released a video of Udai’s last moments, in which he succumbs to a hail of bullets. This video may have been designed to defuse the growing resistance in the West Bank. It had the opposite effect. Ahmed Abu Artema – also writing for Electronic Intifada – described what the video meant to him:

Tamimi’s final moments show the Palestinian victim standing up to the Israeli aggressor. A Palestinian whose homeland has been stolen courted death.

Such bravery does not emerge from nowhere. It stems from a belief in the justice of the Palestinian cause.

Ahmed was one of the organisers of Gaza’s Great March for Return, a movement in which Palestinians in Gaza tried to breach the wall that separates them from their ancestral homelands, which lie within Israel’s borders. The Israeli military met the protests with snipers and live bullets – killing at least 217 people, 48 of them children.

People have found a new strength

The story of Udai Tamimi must be placed within a larger context.

Over the past few months, the situation in the West Bank has changed markedly.

A new spirit has developed. People have found a new strength.

Every day Palestinians undertake some act of resistance or protest against the Israeli occupation.

Ahmed wrote that the resistance is being carried out by young people, who were babies or not yet born during the second Intifada, the Palestinian uprising which began in 2000 and lasted for five years. Their resistance is motivated by the oppression they have seen during their lives.

We need to support Palestinians’ right to resist

As armed resistance against Israeli colonialism grows stronger, we must always remember that our comrades in Palestine have the right to use force, and to take the offensive in their struggle. The current uprisings are the result of the continual theft of Palestinian land by the Israeli state – which has been ongoing since its foundation – and the daily acts of violence that the occupation forces Palestinian communities to endure.

Our place is to support the anti-colonial struggle, and to answer its calls for solidarity.