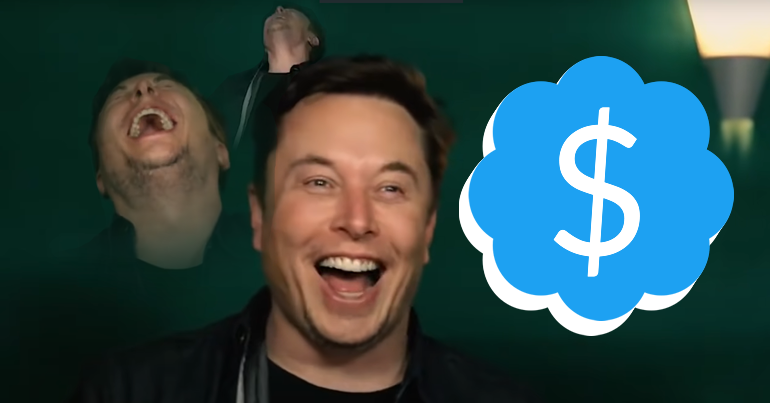 Free speech has been saved! Elon Musk has bought Twitter for a measly $44 billion. He is now our new corporate overlord.

One of his announcements had the world’s richest man sounding like a revolutionary:

Twitter’s current lords & peasants system for who has or doesn’t have a blue checkmark is bullshit.

Power to the people! Blue for $8/month.

That’s right, Musk will be allowing the famous blue tick to be available for all… at a cost of $8/month. What stage of capitalism is it when free speech is now offered at a low low price of only $8?!

Hey Elon, How exactly "the bird is freed" if u charge to keep a blue tick? Free speech needs to be free .@elonmusk #TwitterBlue

I didn’t ask for a blue tick, and refuse to pay $96 a year to keep it. Elon Musk can fuck himself.

Our friends at Evolve Politics hit the nail on the head:

Twitter will become a two-tier system under Elon Musk.

People who pay £7 month for a Blue Tick will now get priority in replies & searches.

Twitter’s entire appeal is that everyone is equal, anyone can go viral, and ordinary people can mock the powerful.

Beginning of the end.

It’s a stupid policy which wouldn’t even have the desired effect. The blue tick will be completely defunct once it becomes a commodity, rather than a verification process.

Maybe it’s a way of trying to claw back some of the $44 billion he spent on buying the bird app, although he may need a few more ideas to get close:

With all the noise surrounding this gimmick, a much more important story surrounding Musk happened as soon as he took over.

Musk has begun to lay off workers at Twitter, with the staff number reduced to around 7,500:

.@ElonMusk owns a company for less than a week and is already racking up labor law violations. https://t.co/NxOd5FQKVc

According to the Washington Post, an email was sent around informing workers of their potential futures (and lack thereof) at the company:

Team, In an effort to place Twitter on a healthy path, we will go through the difficult process of reducing our global workforce on Friday.

We recognize that this will impact a number of individuals who have made valuable contributions to Twitter, but this action is unfortunately necessary to ensure the company’s success moving forward.”

If getting fired to ensure the company is successful isn’t a slap in the face, then I don’t know what is.

However, it seems that Musk may have broken labour laws and will potentially face legal consequences:

Twitter Inc has been hit with a class-action lawsuit over Elon Musk’s plan to lay off workers without enough notice https://t.co/j34HCFvDvt

He’s clearly desperately trying to bring in some cash after blowing $44 billion in a purchase which he acknowledges himself was massively overpriced. Given he is the richest man in the world, it’s safe to say that being rich doesn’t automatically equal higher intelligence.

However, a much darker element of Musk’s takeover of the app has surfaced. Racism has exploded on the platform, with use of the ‘N’ word increasing by nearly 500%:

Wonder how advertisers are going to like the n word app pic.twitter.com/c1UizfHRmQ

Twitter may be heading into a cesspit of even more impersonation and racism.

But the larger point isn’t about the fact that Elon Musk is simply an asshole, it’s the fact that one man can wield so much power. Giving one sole billionaire control of speech on a huge platform, to use it as a plaything when the website has been an important tool – not least for journalism – should never have been allowed to happen.