Starmer showed his true Tory colours at PMQs on 9 November 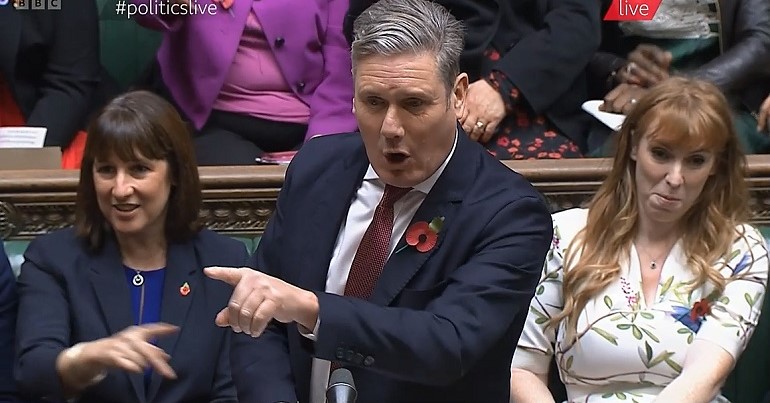 Keir Starmer showed he’s no friend of the activists currently taking on capitalism. The Labour leader used Prime Minister’s Questions (PMQs) as an opportunity to throw protesters like Just Stop Oil to the wolves. Little surprise, really – given he can barely support trade unions.

PMQs: rent-free and solidarity-free, too

PMQs on Wednesday 9 November was a torrid affair, not least with Rishi Sunak showing former Labour leader Jeremy Corbyn was right when he said he lived “rent free” in the PM’s head:

However, Starmer didn’t come off well either. During the slanging match, the subject turned to the Tories’ windfall tax on energy companies. Starmer accused Sunak of fudging it and letting companies like Shell off the hook. The PM responded by saying:

So, did Starmer defend himself against these anti-activist and anti-trade union accusations? Of course not. He merely played into them.

Starmer responded to Sunak by saying:

I’m against all of those causing chaos, damage to our public services and to our economy  – whether they are gluing themselves to the road or sitting on the government benches.

Watch below from 11 minutes 45 seconds:

Wonderful. Not only has the Labour leader refused to support his own party’s affiliated trade unions – now he agrees that protesters like Just Stop Oil are “extremists”, and says he’s against them. What’s the point in Labour, you may ask? At this point, very little it seems.