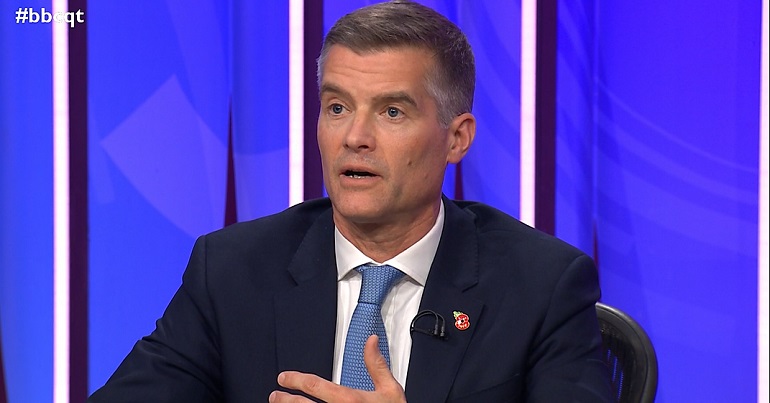 Tory MP and new transport secretary Mark Harper was under pressure on BBC Question Time (BBCQT) on Thursday 10 November. When probed by the audience over MPs’ second jobs and donations, Harper denied he had either. However, is this actually the case? Well, it is now – but only if you ignore previous gifts from G4S, dark money donations to a pressure group he’s in and a second job paying £150 an hour.

How many insects need to be consumed before our politicians are held to a code of conduct fit for their positions?

She was obviously referring to disgraced former health secretary and sitting MP Matt Hancock’s stint on I’m a Celebrity. However her broader point was also about politicians’ behaviour overall, including [19:06]:

repeated allegations of bullying… security breaches… resigning and getting your job back a week later. None of it is behaviour anybody in this audience would be allowed to get away with in an actual place of work.

So what did the Tory MP, whose government the audience member was talking about, have to say? Well, Harper appeared to be whiter than white.

Being a member of parliament is a tremendous honour and privilege… I think we should spend our time, particularly those of us who are lucky enough to be in government… not focused on ourselves, but focused on what we’re trying to do for you.

Hancock, I don’t think, should be going on a reality programme, particularly when parliament is sitting. As a member of parliament, you should be doing your job in your constituency and the House of Commons.

But then, another audience member asked the panel about second jobs and donors. Or rather, she tore MPs apart:

I’m not paid by anybody. I’m paid by the tax payer to be the member of parliament…

I’m not paid for by anybody else, and as a minister I’m allowed to have outside interests… My only second job is I’m secretary of state for transport.

So, is everything Harper said actually correct? Kind of.

Currently, Harper spends his time as a minister and an MP. However, that wasn’t always the case. For over two years between 2017 and 2019, a law firm paid him £3,000 a month for 20 hours work. Clearly, being an MP wasn’t his only job then – with his legal moonlighting paying him £150 an hour. Harper is also a member of the Tory Party parliamentary club the Covid Recovery Group – the finances of which were subject to some digging by openDemocracy. It found “dark money” from unincorporated companies going into the group as well as equity firms and former oil executives.

Also, in April this year, private government contractor G4S gave Harper nearly £2,000 of free training. This kind of “gift” is illegal in many US states because of the possibility it could “improperly influence official action“. A company with government contracts giving a gift to a serving MP is one such example of that scenario. Of course that’s fine in the UK, though.

Harper was directly involved in the coalition government’s creation of a register of lobbyists. But as Spinwatch wrote at the time:

the minister in charge of introducing lobbying transparency regulations, Mark Harper, is refusing to release details of his discussions with lobbyists over lobbying transparency rules. SpinWatch submitted an FOI request to the cabinet office in August 2010. Fourteen months on, the release of the information is still being blocked.

And on who pays Harper, it’s not just the public as he claimed. He’s received over £25,000 in donations since becoming an MP – and a few subsidised trips from the Conservative Friends of Israel, too.

Exasperated, and not just with Harper

However, Harper’s outside interests are small fry compared to other MPs – like former prime minister Boris Johnson. As Data Lobo wrote, between 2017 and 2019:

But the point is that even the most frugal politicians still get bungs – Harper included. It’s time to end the gravy train that is the Westminster bubble, because the only people benefitting from the ride are politicians and their cliques.