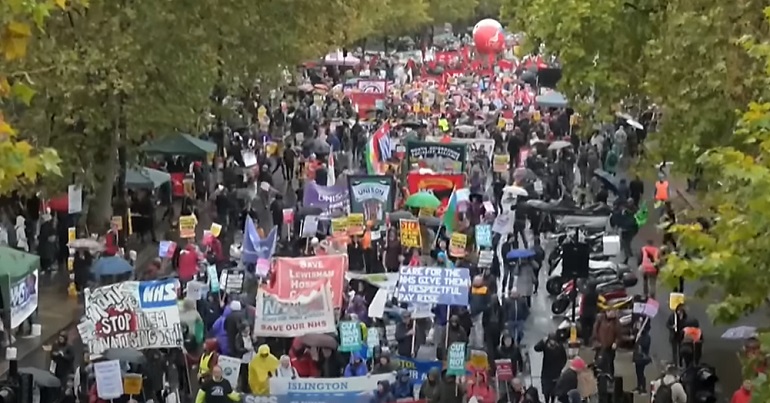 As the UK is gripped by the Tory-induced cost of living crisis, another trade union has announced a series of strikes. This begs the question: are there any workers left who aren’t taking industrial action?

A winter of severe discontent… for the Tories

In recent days, we’ve had announcements from the Royal College of Nurses (RCN), the University and College Union (UCU), London Unite bus drivers and Public and Commercial Services (PCS) union that their members will strike. The PCS union action must be particularly galling for the Tories, as government civil servants will be walking out.

Other unions are still balloting their members – including teachers, bus drivers elsewhere in the country via Unite, and Unison’s NHS division. The Fire Brigades Union (FBU) is currently running a consultative ballot for its members. Meanwhile, strikes from the Communication Workers’ Union (CWU) and National Union of Rail, Maritime and Transport Workers (RMT) continue.

And now, a rail union has announced further strikes, too.

Trade unions: another walk out

The Associated Society of Locomotive Engineers and Firemen (ASLEF) has said its train drivers will be striking across the UK. It said in a statement that:

As with many of the strikes, ASLEF members will walk out again over pay. Train operators are giving workers a real-terms pay cut due to spiralling inflation and companies’ greed. The union previously held strikes on days across the year. However, many of the train companies have refused to budge. So, the strikes will continue.

We regret that passengers will be inconvenienced for another day. We don’t want to be taking this action. Withdrawing our labour is always a last resort for a trade union.

We have come to the table, as we always will, in good faith but while the industry continues to make no offer… we have no choice but to take strike action again.

They want drivers to take a real terms pay cut. With inflation now well into double figures, train drivers who kept Britain moving through the pandemic are now being expected to work just as hard this year as last year but for less. Most of these drivers have not had an increase in salary since 2019.

We want the companies – which are making huge profits – to make a proper pay offer so that our members can keep up with the cost of living.

All of this begs the question: if so many unions are striking, why are they not taking coordinated action? That is, why aren’t unions organising a general strike? Hopefully they are, and we just don’t know it yet – coordinated union action would send the strongest message to the Tory Party that workers won’t tolerate their toxic governance any longer.