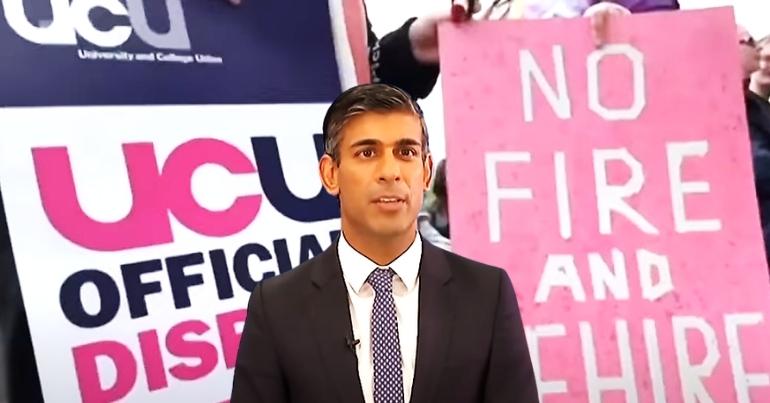 Spare a thought for new PM Rishi Sunak – or don’t, if you’d prefer. Either way, he’s only hours into the job of prime minster and already facing a new wave of strike action. This time, it’s coming from the University and College Union (UCU). However, we already know Sunak’s views on strikes – and they don’t bode well for workers.

UCU members have been striking across 2022 over pay and conditions. As Bywire News previously reported, the industrial action earlier in the year:

centred around universities inflicting a 25% real-terms cut to staff pay since 2009. But UCU members have also been striking over their pensions.

The pension fund that runs higher education staff’s retirement pots put in a cut of around 35% to members’ final pay-outs. So, tens of thousands of staff at dozens of universities repeatedly walked out in the first part of the year.

But there was a catch. Because the UCU initially couldn’t reach the legal threshold for industrial action nationally, members did ballots at individual universities. So the action wasn’t totally coordinated. However, that’s just changed.

… but this time, everybody

As the UCU tweeted, its members nationally have now voted for industrial action over pay and conditions:

And they voted even more overwhelmingly for strikes over pensions – unsurprising when bosses cut 35% off people’s pension money:

Bosses have currently offered university staff a 3% pay rise across the board, and 9% for the lowest paid. This is of course ridiculous and a real-terms cut due to inflation sitting at over 10%. So the UCU is demanding 12%.

It also wants bosses to take action on what it calls “dangerously high workloads”. Moreover, the UCU wants an end to zero-hours contracts. But behind these demands, the real-world effects of university bosses’ treatment of their workers are stark.

university workers were “ready and willing to bring the entire sector to a standstill if serious negotiations don’t start very soon”… Grady said some members on zero-hours contracts have told the union they have had to live in tents, sleep on library floors, or go to food banks as they “cannot make ends meet” with their low pay. “That is the dirty secret of higher education,” she added… “We are fighting for a better education system, and students would benefit from that too.”

Naturally, the bosses are being obtuse, with one saying they:

want to do more for their valuable staff, but any increase in pay puts jobs at risk

This won’t deter UCU members though – they’ve heard it all before. However, we know that the new PM is already very anti-worker. During the last Tory leadership election in July, Sunak said, according to Channel 4 News, he would “ban strikes on essential public services”.

Sunak: a winter of discontent

Unfortunately for Sunak, he’s never experienced mass industrial action as a PM before. And now, he’s got even more on his plate. From the RMT to the CWU and now the UCU, and with the nurses’ union currently balloting its members, ‘Dishy Rishi‘ looks set for his own winter of discontent before he’s even got his foot in the door. Boohoo.