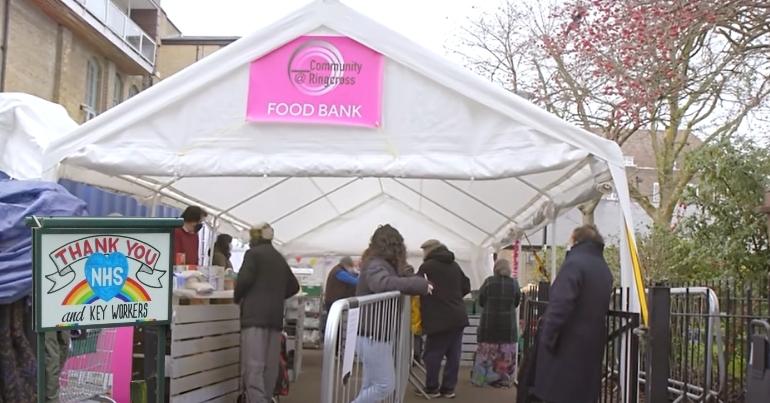 NHS hospitals have started opening foodbanks for their own staff. It’s a move one trade union called a “shocking sign of the times”.

BBC News reported that the University Hospitals of Leicester (UHL) NHS trust has opened foodbanks for its staff. The trust runs three hospitals in and around the city. BBC News said:

Employees can get food, toiletries and supermarket vouchers from hospital restaurants and chapels.

The trust has also put other measures in place, including:

the reduction of food costs in canteens, children of staff eating for £1 in hospital restaurants, free facilities to wash and dry clothes on site, and free staff travel on hospital buses.

Leicester is not the only city to see hospitals running foodbanks for staff. The Times reports that across England, 27% of hospitals have staff foodbanks.

NHS staff are in this position because of the Tories. After Boris Johnson’s government gave NHS staff a pathetic 3% pay rise in 2021, it doubled down by only giving them 4% this year. However, in 2021 real-terms pay had already fallen by 7.3 to 7.6% since 2010 for nurses and other staff. However, recently departed PM Liz Truss still dismissed the issue of NHS staff using foodbanks. This is despite a recent survey finding that 14% of nurses had to use them. Little wonder that trade unions the Royal College of Nurses (RCN) and its midwife counterpart are currently balloting their members for strike action.

As NHS leaders, I think we have a moral responsibility to support our colleagues through this challenging period. At UHL, we are offering support around the costs of food, transport, energy for people who need it and considering how else we can support colleagues on the lowest pay.

However, trade unions and campaign groups have blasted the situation.

UNISON East Midlands says UHL’s installation of foodbanks showed “the present problems within the NHS in respect of the level of pay”. Campaign group NHS Workers Say No went further, telling the Canary:

It’s not a surprise to see yet another foodbank for hardworking staff opening in a hospital. The Tories have dealt NHS staff year after year of real terms pay cuts. This has left many of them working 40+ hours a week and selling back their annual leave just to survive. The Tories refusal to raise workers’ pay in line with inflation has left us with the situation that the NHS is no longer a living wage employer. This is why unions are conducting industrial action ballots across every corner of the NHS. We have no hope of recruiting or retaining staff unless this crisis is addressed – and that has repercussions for us all.

Foodbanks themselves are already overstretched. Several organisations delivered a joint letter to Downing Street recently, saying they are:

With inflation set to rocket further and no additional pay rise in sight, NHS workers are already under immense strain. Factor in another looming, Tory-created winter crisis, rising coronavirus (Covid-19) deaths and increasing flu cases, and staff will soon be well-past breaking point. The Tories’ shocking treatment of some of the country’s most vital workers is disgusting. But when a government encourages claps over decent pay – this is the end result.