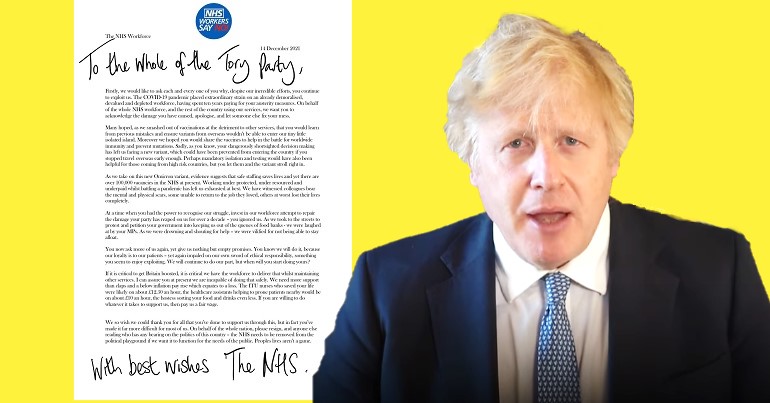 A group of NHS workers have written an open letter in response to Boris Johnson’s message to healthcare staff. And it makes for uncomfortable reading – if you’re the PM, of course.

On Tuesday 14 December, Johnson released an open letter to NHS workers. In it, he was asking them for help with the coronavirus (Covid-19) booster vaccination programme. Johnson said:

I would like to thank each and every one of you for your incredible efforts during the COVID-19 pandemic. I know it has placed extraordinary strain on all NHS staff… On behalf of the whole country, I want to acknowledge and praise your extraordinary hard work.

My letter to everyone working in the NHS. pic.twitter.com/MzEqVdZ8m4

But some NHS staff were not happy with Johnson’s words. So, a group of them wrote a reply. It published the letter on Twitter. And the response to it has been huge.

NHS Workers Say No is a grassroots campaign group. It’s been at the forefront of action against the Tory-created NHS crisis this year: from protests outside parliament, to huge petitions, via campaigning videos. NHS Workers Say No has been relentless in its fight for a safe NHS that pays it staff properly and works for everyone.  Now, it’s written an open letter to Johnson. It mimics the style of his letter. And it’s blown up on Twitter:

Our letter to the whole of the Tory Party… pic.twitter.com/AGgCK5cMOR

The letter says, mocking the PM’s own words:

It then goes on to talk about the issues with staff shortages (nearly 100,000 to be precise); NHS pay (the dire government increase of 3%), and the physical, mental, and emotional impact all of this – plus the pandemic – has had on staff.

The letter was written by Kirsty Brewerton, one of the founders of the group. She told The Canary:

I wrote the letter because nobody seems to be listening, and nobody seems to care. Who is supporting frontline workers? Our government? No. Our employers? No. We can’t carry on like this, but we aren’t being given any other option.

The letter ends by saying:

We so wish we could thank you for all that you’ve done to support us through this, but in fact you’ve made it far more difficult for most of us. On behalf of the whole nation, please resign

We all need to act

There was a sense of outrage amongst NHS workers when we saw the pitiful ‘thank you’ letter from Johnson. We have been left in a vulnerable and dangerous position due to over ten years of austerity utterly decimating our services. We are sick to death of gestures, we need action.

It’s now up to opposition politicians and the public to firstly support NHS workers – but also to force change in the NHS before the Tories do any more damage.