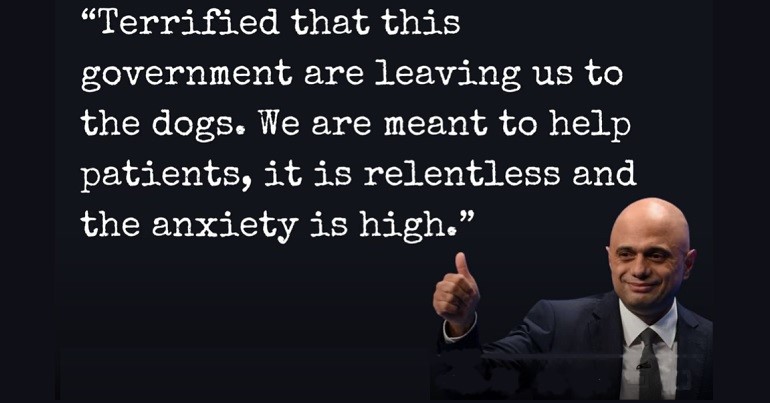 Health secretary Sajid Javid has angered NHS workers. This is because he seems to be failing to recognise the huge pressure they and the health service are under. So, one group of NHS workers have delivered a damning collection of messages via video. And the end result paints a stark picture of the situation on the NHS frontline.

Javid: nothing to see here

As of Tuesday 26 October, the rolling seven day data showed coronavirus deaths and hospital admissions were both up. Meanwhile, the total number of daily cases was over 40,000 – down just 0.4% on the previous week. Yet according to the health secretary, this is apparently ‘sustainable’ for the NHS.

Pulse reported on Javid giving a press conference on 20 October. During it, he said:

We don’t believe that the pressures that are currently faced by the NHS are unsustainable.

Don’t get me wrong, there are huge pressures – especially in A&E, in primary care for example as well – but at this point, we don’t believe they are unsustainable.

'At this point we don't believe they're unsustainable.'

His opinion did not go down well with many people. The Northern Echo dedicated a whole front page to criticising him:

We're committed to standing up for YOU and this week was no different. We challenged Health Secretary @sajidjavid on why under-pressure hospitals were 'sustainable' after revealing the harsh reality that the NHS is facing in the North East (1/4) https://t.co/J4p1R9CihY

Frontline NHS workers were particularly angry about the health secretary’s comments. So, a group of them decided to make a video.

The Canary has been reporting on the group’s actions. From a huge petition it delivered to Downing Street to opposing the government’s dire pay rise offer, NHS Workers Say No has been building real momentum around raising the concerns and voices of frontline staff. Now, it’s turned its attention to Javid’s comments:

⚠️ | @sajidjavid stated that the NHS is currently under ‘sustainable pressure’. We asked NHS Workers for a short statement about THEIR feelings.

Overwhelmed with responses, we tried to include as many as we could in this video.

The group said it:

decided to ask NHS Workers for a short statement about THEIR feelings about the current pressures in the Health Service.

NHS Workers Say No put the responses into a video. And people’s comments were telling.

Terrified that this government are leaving us to the dogs. We are meant to help patients, it is relentless and the anxiety is high.

Each shift fills me with a sense of dread, I know what I am going into will be worse than the last shift. We are trying to swim through treacle, wearing concrete shoes, with our patients on our backs.

Someone else called the situation:

And as one worker summed up:

The government keep saying everything is fine – when it’s NOT!

A disastrous winter ahead?

The NHS is already facing a potentially catastrophic winter. Yet the government so far is barely recognising this. It clearly knows there could be a major problem. Otherwise, it wouldn’t have put 4,000 army troops on stand-by to step in if needed. Meanwhile, Rishi Sunak’s budget gave £5.9bn to the NHS. This is to tackle waiting lists. But that’s not enough to address the near-100,000 staff vacancies in England alone, the combined pressure of both coronavirus and flu cases, and, crucially, NHS workers’ wellbeing.

Javid’s weasel words will do little to ‘protect the NHS’ – a mantra previously pushed so hard by the government. It now remains to be seen how our public health service will cope over the coming months.