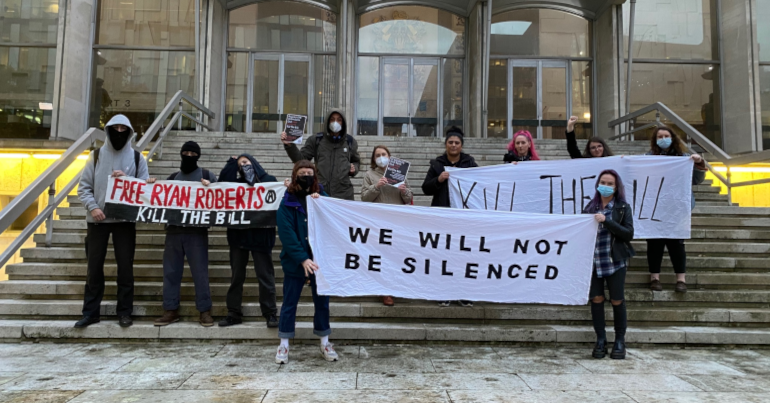 On Wednesday 27 October, a defendant explained to a Bristol jury why we need to defund the police

Ryan Roberts – who is standing trial for riot and arson at Bristol Crown Court this week – told the court that defunding the police:

Ryan went on to explain that money currently used to fund policing could be spent on other services, which are currently underfunded.

Ryan – who has been on remand in HMP Horfield since April – is currently standing trial for riot as well as six charges relating to arson against police vehicles. Ryan has pleaded not guilty to all charges.

82 people have been arrested so far following the 21 March Kill the Bill demonstration in Bristol.

Eight of those arrested have already pleaded guilty. They’ve received sentences totalling 29 years in prison. But grassroots groups in Bristol have condemned police violence against protesters, and they’ve said that they’re proud of the defendants for fighting back against the police.

27 October was the third day of Ryan’s trial. The day began with the prosecution closing its case. Ryan then took to the stand to give evidence.

Defence barrister Nicholas Lewin asked why Ryan was at the 21 March Kill the Bill protest. Ryan explained that the Police, Crime, Sentencing and Courts Bill:

would be an end to the right to protest

Ryan said it was “a fight for the freedom of our speech,” adding that the escalation occurred after the demonstration had reached Bridewell Police Station. And everything changed after:

the police getting into their PSU [Police Support Unit] suits, pushing people and making – as they call it – their sterile environment

Police Support Units are made up of officers trained to deal with riot situations. A ‘PSU suit’ is another name for police riot gear.

Earlier, the court had heard from officers that the police had attempted to create a “sterile environment”, keeping the demonstrators away from the police station. They had tried to do this by creating two police cordons.

Ryan told Lewin that after the police had donned their riot gear, what followed was

pushing, shoving, and hitting with shields and batons

Ryan told the court that several close friends – who were “like family” – were present that night, and described how one friend was injured after:

she was hit with a shield and a baton

When Lewin asked Ryan whether people had been injured, Ryan said:

“Whose Streets? Our streets!”

Some of the questioning centred on the slogan ‘Whose streets? Our streets!’ which was chanted by the demonstrators. Ryan explained that the slogan was about the need to:

Reclaim our streets basically, it relates to the Sarah Everard case, and other incidents that have happened with other police forces throughout the country.

Earlier in the trial the prosecution presented footage showing Ryan kicking a police riot shield. Ryan explained that this was in self defence, and it happened:

after my friend was hit with the same shield, and I was pepper sprayed myself.

Later on – during cross examination – the prosecutor showed video where Ryan apparently throws items at officers. Ryan said it was:

after being pushed, by the police in their PSU gear.

Ryan argued that the act of throwing a can at the police was self defence. When the prosecutor asked:

That wasn’t in self defence was it?

The exchange about defunding the police came as Lewin questioned Ryan about why he had caused damage to the police station and police vehicles. Ryan said the police needed to be defunded:

Because of what they’ve done in Bristol and elsewhere.

A member of the jury asked Ryan to explain further about defunding the police. Ryan said that government funding that was not channelled towards policing could be spent on:

suicide prevention, protecting people on the streets… child safety, there are lots of other areas that aren’t funded correctly.

In answer to questions about the arson charges, Ryan admitted setting light to rubbish and cardboard underneath police vehicles. When asked why, Ryan said it was:

to make space between the police and the protesters, seeing as the violence that had occurred before – I didn’t want to see any more.

Similarly, when questioned about pushing bins up against an already half burnt Ford Cougar police vehicle, Ryan said that it was because the police:

were going to push us back.

Footage seen by the court showed that the police did advance on protesters only a short time later.

The prosecution’s cross-examination centred on whether Ryan intended to set fire to police vehicles in the knowledge that they were occupied by police officers. Ryan adamantly denied this.

Earlier in the case, Lewin had questioned police witnesses about two videos showing police striking protesters – including people who had already been knocked to the floor with riot shields. Lewin asked whether Ryan had witnessed similar incidents. Ryan said that there had been many more such incidents of police violence on 21 March, and on subsequent Kill the Bill demonstrations.

Lewin asked why Ryan hadn’t simply gone home when the confrontation started. According to Ryan it was because:

I was fighting for a cause I felt strongly about

The next witness to give evidence for the defence was Kathryn Hobbs, a volunteer legal observer who had been present on 21 March. Hobbs described the scene when she arrived at the Kill the Bill demonstration at around 1.30pm:

it was a large mixed gathering, people were there with their families and children. It was a sunny afternoon and people were in light clothing.

They described how people marched from College Green to Castle Park. Hobbs said that when she arrived at Bridewell police station:

the mood was relaxed.

When we initially arrived the police were in yellow high-vis uniform, but shortly after police arrived in riot gear, with helmets and batons.

There was unease from the crowd, it was out of step with the tone of the demonstration.

Hobbs explained what happened next:

The officers wanted to move the crowd back, they were carrying their rounded shields with their batons up. They struck at the crowd and pushed.

I was in amongst the crowd when this happened.

It’s recorded in my notes that they were violently shoving, hitting and kicking people to move the crowd back.

I don’t think it’s the policing response that any of us were expecting.

Soon afterwards we could hear the barking of the police dogs and five or six police horses came towards the crowd. It’s recorded in my notes that the horses charged the crowd – although they pulled back.

I saw a woman pushed violently to the ground, and it’s in my notes that they were hitting people on the ground.

Hobbs described how the demonstrators tried to de-escalate the situation:

Most of the people near the front of the demo were holding up their hands, some people had turned their backs to the police, others were telling people to sit down which is usually a de-escalation tactic.

Later on the police started using pepper spray. Hobbs and others from the legal observer team – some of whom had some first aid skills – tried to help people who were hurt:

She described the scene a little later in the evening:

People were walking around appearing quite shocked for a time, and then the police line would push forward and there would be another period of intense violence.

Hobbs explained that she had provided evidence from her legal observer notes to the All Party Parliamentary Group on Democracy for the policing of Kill the Bill protests in Bristol and the Clapham vigil for Sarah Everard.

Towards the close of the day, Lewin asked Hobbs to explain the controversial police practice of ‘blading’. Hobbs said:

there are two types of police shield – one circular, one oblong – and blading is where the edge of an oblong shield is brought down on someone, it’s very dangerous.

Solidarity with the defendants

After court was over, a demonstration was held on the court steps:

A solidarity demonstration was also held in Manchester:

The demonstrators in Bristol then marched to Bridewell Police Station, the scene of the 21 March confrontation, amid chants of:

Kill the Bill defendants, you are not alone!

The Canary hopes to keep reporting on the trial as it continues.