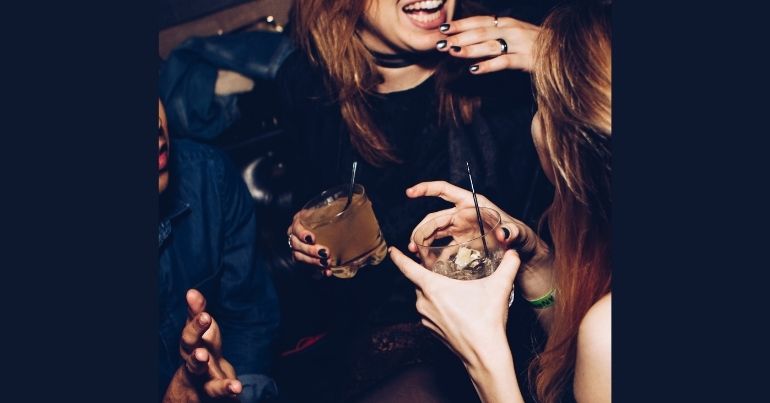 On 27 October, thousands of young people boycotted their local clubs, bars and pubs and took to the streets to demand action on spiking and sexual harassment. The protest came as a response to the recent rise in drink spiking cases, as well as new allegations of spiking via injections.

According to the the National Police Chiefs’ Council (NPCC), people reported nearly 200 drink spiking incidents to UK police in September and October. Spiking typically refers to the surreptitious addition of a drug to someone’s drink which can leave the victim incapacitated and unable to remember what’s happened. This method is often used to facilitate sexual assault. But this figure also includes 24 allegations of perpetrators using “some form of injection” to incapacitate victims. According to police, young women were disproportionately represented in reported cases. In response to what has been labelled a “spiking epidemic“, young women have spoken out about their experiences of gender-based violence.

This is an absolutely horrific method of targeting women and marginalised folk in nightclubs, and especially student areas. Although we know that’s spiking is not limited to freshers week, there have been increased reports of this happening at towns all around the country.

so fucking angry that women + marginalised folks on our campuses and in our communities cannot be free from the fear of violence. these spiking attacks are so terrifying.

The limited research on the practice of spiking via injection has left plenty of space for fear-mongering and misinformation. gal-dem‘s political editor Moya Lothian-McLean tweeted:

Looking to “cut through the noise” regarding the rise in spiking incidents, Vice reporter Sophia Smith Galer shared:

So, while we talk about spiking this week, it’s worth remembering that the autumn spate is sadly not unusual nationwide, and also that it’d be wrong to assume it’s a uniquely ‘stranger danger’ issue. It’s also worth adding victims often don’t get the support they need.

Emergency medicine consultant and founder of the Welsh Emerging Drugs & Identification of Novel Substances (WEDINOS) David Caldicott told Vice: “The idea that a clubber would do this to a fellow clubber seems highly unlikely”. He added that the phenomenon “has not been adequately investigated” to reach firm conclusions.

We have also seen a rise in misinformation around the allegations of spiking via needles and the contraction of HIV. Highlighting the harm this could cause, Ellie Redpath said:

keep in mind that the false posts about HIV and spiking going around are bad not only because it makes everyone unnecessarily scared, but also because it contributes to stigmatisation and panic around HIV, and thus subconsciously the queer communities who it historically affected

Seeking to clear up misinformation on this front, the National Aids Trust shared:

If you have potentially been exposed to HIV in the past 72 hours (usually through unprotected vaginal/anal sex), go to A&E or a sexual health clinic.

You can take a medication called PEP, which greatly reduces your risk of acquiring HIV.

A nationwide ‘night in’

Sparked by recent social media conversations about the prevalence of spiking, young people in university cities up and down the country took part in a ‘night in‘ on 27 October. Thousands boycotted clubs and other night time venues, and took to the streets to raise awareness and demand action on drink spiking and sexual harassment.

Some have argued that protesting in this way encourages women to retreat rather than claiming space. But given the boycott resulted in clubs not being able to open, it proved to be an effective protest tactic. Sharing images from the boycott in Oxford, Oxford Students’ Union tweeted:

Afterwards, students went to the Clarendon steps for a demonstration showing the volume and strength of students’ feelings against spiking. There were speeches from student campaigners and local councillors on this topic. In the end, more than 500 students came to demonstrate! pic.twitter.com/0eLLM3uH3N

Local politicians voiced their support for the campaign, and others attended protests in cities across the UK. Sharing images of campaigners and their banners at the Manchester protest – which mayor Andy Burnham attended – the Guardian‘s north of England editor Helen Pidd tweeted:

Hundreds of young people have gathered in St Peter’s Square in Manchester for the End Spiking Now protest. Banners saying: “I have never felt safe” and “Educate your sons”. #GirlsNightIn pic.twitter.com/waHrcoSsmJ

Tonight was so powerful; to march with over a 1000 people standing up against #spiking against women, demanding concrete change, and making it clear that it is male behaviour that needs to change, not ours. #girlsnightin pic.twitter.com/1yXrMDtEGg

After reports of spiking by injection, tonight women are boycotting clubs to put collective pressure on institutions to act.

I stand in solidarity with them.

We shouldn’t have to do this.#GirlsNightIn

Campaigners have launched a petition calling on the government to introduce a law making it a legal requirement for nightclubs to search guests on entry to venues. However, some have raised concerns that increased security and surveillance on nights out would disproportionately impact marginalised people. Summarising the potential consequences, one Bristolian shared:

i’m also sick of the lack of intersectionality when looking at the issue – security is often the problem! increasing that will not make this go away! obviously i do not have the answers but increasing searching is absolutely not it

The University of Warwick’s Anti-Sexism Society has expressed its commitment to seeking alternative ways to keep everyone safe in venues:

so look out for future announcements and campaigns.

Campaigners are also urging venues to implement anti-spiking measures including “drink protection devices”, accessible medical centres, and safe ways to get home. Further protests are due to take place in Edinburgh, Glasgow, Cardiff and London. So far, the campaign has sparked meaningful conversations about the safety of people of marginalised genders in public spaces, and has prompted politicians to take the issue seriously.