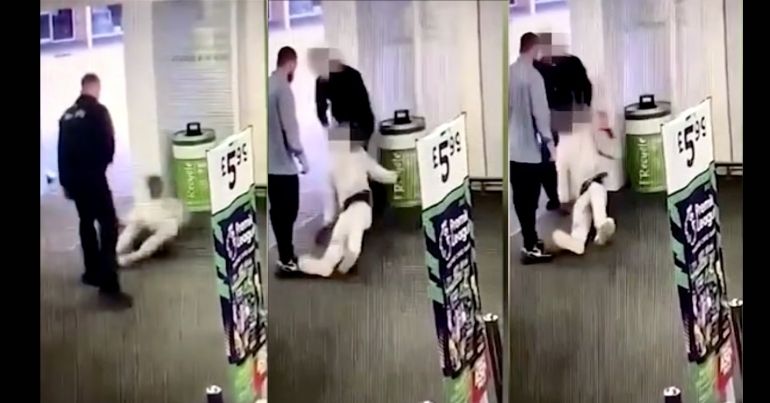 An Asda security guard is under police investigation after footage emerged of him assaulting a young Black man entering an outlet in Shoeburyness, Essex. The guard claims he was ‘just doing his job’ and alleges he believed the young person was carrying a knife and that he had threatened both himself and other customers.

However, anti-racist campaigners have accused the guard of racially profiling the young customer.

Another case of racial profiling

The footage shows a security guard punching a young Black man. The guard then proceeds to drag the young person’s limp body out of the shop, and dump him on the pavement outside. A second clip shows another person handing the young man his phone, which dropped out of his pocket during the assault. Another person helps the young man up, and he stumbles away, unsteady on his feet.

What @Asda store is this? @Asda, what are you going to do about this? In a world where Black boys and men can get knocked unconscious due to suspicion of carrying a weapon. When will the narrative change? When it’s ingrained in our society. pic.twitter.com/s9f6zRrwBD

Meanwhile, the responses from the likes of right wing culture warrior Laurence Fox to “give the Asda security guard a medal, and the knife coward a lengthy stretch” reflect the toxic way in which mainstream society seeks to surveil, control, and criminalise young Black men who are considered ‘guilty until proven innocent’.

It is these narratives that lead to the police’s excessive and disproportionate use of stop and search powers against young Black men, as well as their overrepresentation in the ‘Gangs Matrix’, joint enterprise doctrine convictions, and the youth and criminal justice systems.

How Shoebryness @asda treats black boys. We think an assault may have been commited. Who is the guard and who does he work for? https://t.co/UKfsLUnHfj

The violent attack on this young man is shocking and horrific and really upsetting and distressing to watch the footage let alone to be the person who went through this. No security guard has any right to do that to anyone, he could have killed him. The young man could have sustained a serious head injury. He was bleeding and unable to stabilise himself to stand or walk properly.

Asda have a duty of care towards customers and should not be tolerating or directing such treatment, irrespective of the reason behind it. They need to he held accountable for the security guard’s actions and the security guard needs to be punished for their crime. It seems that organisations and individuals feel they can violently attack black people with impunity but we are not going to tolerate violent attacks on our young people.

Essex Police are now investigating the incident. An Asda spokesperson told The Canary:

We do not tolerate violence in our stores and are investigating the incident in our Shoeburyness store as well as supporting the police fully with their enquiries. As this is an ongoing police investigation we cannot provide any further comment at this time.

BAME Lawyers for Justice is urging the young man and his family to get in touch if they require support.