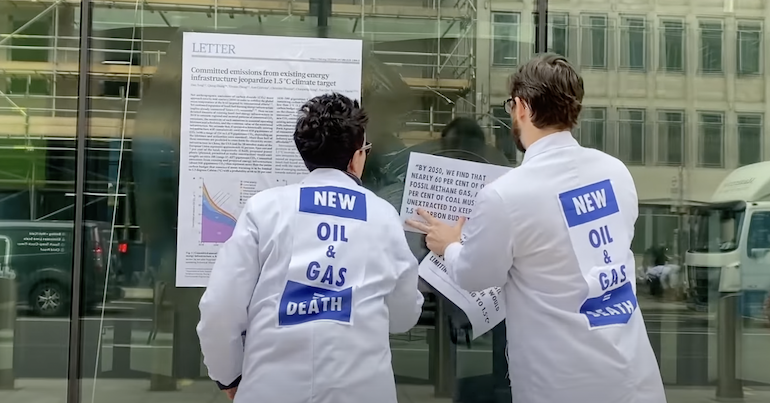 Magistrates acquitted five scientists on 21 October for their protest against the government’s energy plans, which includes new oil and gas exploration. The Crown Prosecution Service pursued the scientists for criminal damage after they participated in direct action at the Department for Business, Energy and Industrial Strategy (BEIS) in April.

At the time, one of the scientists – Dr Aaron Thierry – explained why he took part in the action, saying:

We have tried all the rational, normal, evidence-based policy approaches and they’re just not acting according to it. The government’s insane and I don’t know what else to do

“The government’s insane, and I don’t know what to do, other than to do this, to try and get the attention that we need to wake the public up.”

Ecologist Dr Aaron Thierry (@ThierryAaron), who has his hand superglued to the window at @beisgovuk with @ScientistsX pic.twitter.com/Hx8oAvZZgC

25 scientists took part in the protest. The action involved the scientists pasting scientific papers on BEIS’s windows, along with some gluing themselves to the building. This happened days after the government released its energy security strategy. The energy strategy included plans to encourage more drilling for oil and gas in the North Sea. It also promised a review of the potential for fracking in the country.

The United Nations chief António Guterres, the Intergovernmental Panel on Climate Change and the International Energy Agency have all warned against the exploration of new fossil fuels due to their contribution to global warming.

This time last week a group of desperate scientists stuck scientific papers (and themselves!!!) to the front of @beisgovuk. They had a simple and science led demand: Stop all NEW fossil fuel investment & development.

Here's a🧵on the science in the papers they pasted… 1/n pic.twitter.com/WMlyGxCZfK

Emma Smart, Dr Stuart Capstick, Dr Abi Perrin, Dr Aaron Thierry and Dr Caroline Vincent faced a charge of criminal damage as a result of their involvement in the protest. However, the Magistrates Court found that the scientists had no case to answer and acquitted all five of them.

Four other scientists involved were tried in September and found guilty. According to one of them, Colin Davis, they are planning to appeal:

Four of us who took part in exactly the same action were tried separately, appearing before the notorious Judge Snow. He refused to allow our legal arguments to be made and found us guilty rather summarily. We are seeking leave to appeal …

Bindmans LLP represented four of the scientists in the Magistrates Court case. Following the judgment, their solicitor Hester Cavaciuti commented:

This prosecution should never have taken place. We made representations to the Crown Prosecution Service (CPS) not to pursue this matter, but they insisted on doing so.

The CPS’s attempted prosecution of them comes amid a widespread crackdown on the right to protest in the country. Dr Vincent condemned the government’s introduction of “oppressive laws” that stifle the “voice of reason”, saying:

The government would rather prosecute scientists and suppress legitimate protests than act on the advice they receive from scientists and their own advisors.

Amid the continued championing of fossil fuel expansion by the UK government and others around the world, many scientists appear undeterred. Thierry and others penned an article in August that argued:

We have long since arrived at the point at which civil disobedience by scientists has become justified.

They warned that inaction from governments, industry and civil society is “setting the course” for catastrophic levels of global warming. The scientists insisted that in order to have any hope of securing a liveable future, civil disobedience is needed now.