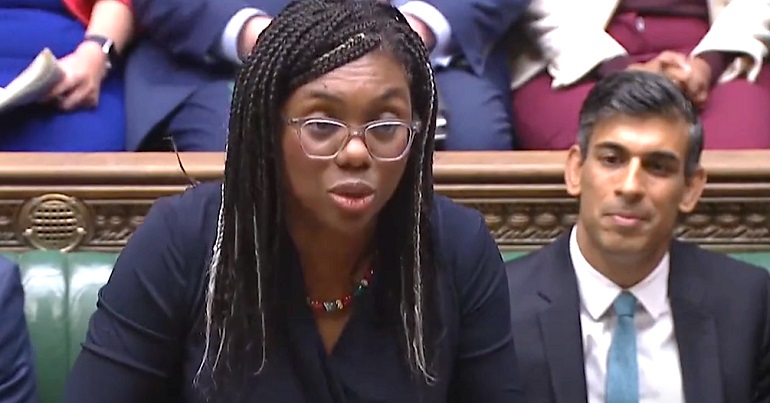 Tory MP Kemi Badenoch keeps coming back to government, despite numerous controversies. But her reappointment as equalities minister is deeply worrying – not least for the LGBTQIA+ community.

has made a name for herself in the right wing-manufactured culture war by railing against critical race theory. She also attacked journalist Nadine White, who is the first dedicated race correspondent at the Independent.

In 2019, Badenoch dismissed the #MeToo movement, saying that:

When I look at a lot of the stuff that you see on social media about how – I think it’s a generational thing as well – younger people look at appropriate behaviour and what is a sexual advance, what is sexual harassment and so on, to me, it’s actually becoming a lot more puritanical than anything I ever saw in my 20s or in my teens.

We are running a compassionate equalities strategy and we should nor be distracted by people who use Twitter as a way to insult or accuse members of parliament.

Naturally, Badenoch’s claim of a “compassionate equalities strategy” is demonstrable bullshit if you base it on her opinions on LGBTQIA+ people.

Back in 2019, Badenoch abstained on the North of Ireland same-sex marriage vote. In 2020, she had an “introductory meeting” with anti-trans campaign group the LGB Alliance. As openDemocracy wrote, the Lib Dems hit back hard, saying the LGB Alliance:

pursuing a single-minded vendetta against trans people [which] presents a real and active danger to the mental and physical safety of trans people, which is vastly exacerbated when those in authority lend them credibility.

However, her most offensive views were in private – or so she thought, until an apparent recording was leaked to Vice.

Queer Insider reported that the equalities minister was recorded in 2018 saying:

It’s no longer about minority rights in terms of race any more or nationality,” Badenoch can be heard saying, “it’s now, you know like, it’s not even about sexuality now, it’s now like the whole transgender movement, where, OK well we’ve got gay marriage, and civil partnerships, so what are transsexuals looking for?

Even when, you know, so, people hear about, you know like the whole bathroom thing, it’s actually more of an American thing but they have a similar problem, that, right so now it’s not just about being free to marry who you want, you now want to have men using women’s bathrooms.

displays an appalling lack of understanding of the issues at best; at worst, it is crass, offensive and possibly evidence of a bias against trans people that should render the minister unfit to make any judgements or decisions on the subject.

In a functioning society, Badenoch’s status as an MP would be questioned. But this is the UK. So, new PM Rishi Sunak appointed her as equalities minister. This makes Badenoch the person in government directly responsible for trans rights.

So, same-sex marriage appears to be unpalatable for Badenoch, and her comment about “men using women’s bathrooms” is potentially unlawful under the Equality Act 2010. Not that this matters to her – anti-LGBTQIA+ discrimination is clearly all in a day’s work for the new equalities minister. The community now faces a very real threat – coming directly from a government charged to protect it.