We should all be concerned by Modi's support for Sunak - Canary 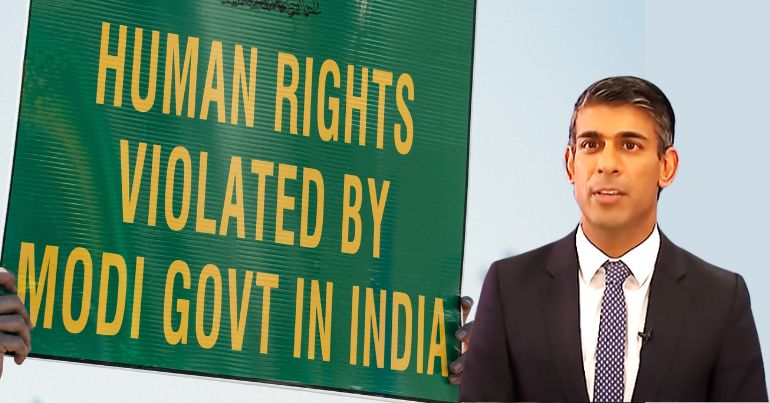 On 24 October, far-right Indian prime minister Narendra Modi congratulated new British prime minister Rishi Sunak on his appointment. This comes as Modi’s government continues to whip up Hindutva nationalism in India, an ideology which has also spread to Britain. Alarmingly, instead of condemning Modi’s exclusionary and discriminatory policies in India, the Tories are firming up a convivial relationship with Modi’s fascist government.

Not a win for diversity

Sunak is the first person of South Asian heritage, the first Hindu, and the first person of colour to become British prime minister. However, the chaotic rise of a privately educated former banker with a terrible voting record, who sits on an obscene £730m fortune, cannot be construed as a win for equality, diversity, or inclusion in politics.

Media Diversified editor Marcus Daniel summed this up by saying:

Rishi Sunak is proof to all little South Asian kids that if your parents send you to £46k pa Winchester College you become a banker and profit millions from financial crash that led to 300k dying from austerity and throw other POC under the bus you too can be PM. Inspirational 🥺

Indeed, as Daniel went on to highlight, Sunak’s commitment to maintaining and exacerbating racial and class inequalities is evident in his diversion of funding from ‘deprived urban areas‘ to wealthy, leafy suburbs. It is also evident in his commitment to increasing discriminatory stop and search, as well as his divisive rhetoric blaming “a particular group of people” for child grooming. In short, Sunak’s premiership is terrible news for working-class Black and Brown communities, who are already being hit hardest by the cost-of-living crisis.

Referring to the 2030 Roadmap for warm political relations between India and Britain (which includes mutual support and a potential free trade deal), Modi congratulated Sunak on his appointment, saying:

Warmest congratulations @RishiSunak! As you become UK PM, I look forward to working closely together on global issues, and implementing Roadmap 2030. Special Diwali wishes to the 'living bridge' of UK Indians, as we transform our historic ties into a modern partnership.

Modi and the militant Hindu nationalist Bharatiya Janata Party (BJP) have overseen the rise of far-right extremism in India, featuring widespread Islamophobic lynchings and mob violence against minoritised groups. Right now, Britain should be condemning and directing sanctions against Modi’s oppressive policies and ideology in India, rather than cosying up to India’s far-right government.

Proud moment that UK will have its first Indian origin PM. While all of India rightly celebrates, it would serve us well to remember that while UK has accepted an ethnic minority member as its PM, we are still shackled by divisive & discriminatory laws like NRC & CAA.

The state of Assam’s National Register of Citizens (NRC) seeks to document Indian citizens in order to identify and deport those who are not citizens, rendering many Indian residents stateless and without access to rights or justice. Meanwhile, the 2019 Citizenship (Amendment) Act excludes Jewish and Muslim people who migrated to India from Afghanistan, Bangladesh, or Pakistan before 2014 from straightforward access to citizenship.

Hitting out against the double standard exhibited by those celebrating Sunak’s rise to power, journalist Swati Chaturvedi stated:

The Bjp currently the major pole of Indian polity under Modi has no minister cabinet or state who is a Muslim. The Bjp does not have a single Muslim MP. Says a lot about its attitude to India’s largest minority. Yes carry on cheering Sunak & diversity

Britain itself has seen the rise of Hindutva nationalism, partly due to the immense power and influence that the Hindu far-right BJP and Rashtriya Swayamsevak Sangh (RSS) have in this country. This reached a critical point in September, when Hindu nationalists carried out violent targeted attacks against Muslim communities in Leicester.

That Modi has congratulated Sunak and the far right Hindutva are so pleased, is also v scary https://t.co/uV3o1OkuQh

Family praise for the BJP

It is unlikely that Sunak will condemn or sanction Modi’s BJP government, given his family’s past approval of the far-right nationalist party. Sharing footage of Suank’s father-in-law praising Modi (who – as governor of Gujarat – oversaw Islamophobic riots led by state-backed Hindutva fascists in 2002), cultural historian Dr Lubaaba Al-Azami tweeted:

Sunak's in laws have links to the Hindutva fascist BJP. Here's his father in law praising Narendra Modi's time in Gujarat. You know, when Modi oversaw fascist riots that massacred thousands of Muslims.
What a time to be alive. https://t.co/vDkQym79TY

Any leader who is concerned about human rights and democracy would immediately condemn Modi and the BJP’s Hindu nationalist agenda. However, Sunak and the Tory government don’t appear to have any intention of doing this.

This spells danger for British Muslims, and suggests that Britain will continue to accommodate the increasingly exclusionary and violent Hindutva nationalist agenda in India.

Featured image via Gayatri Malhotra – Unsplash and the Guardian – YouTube