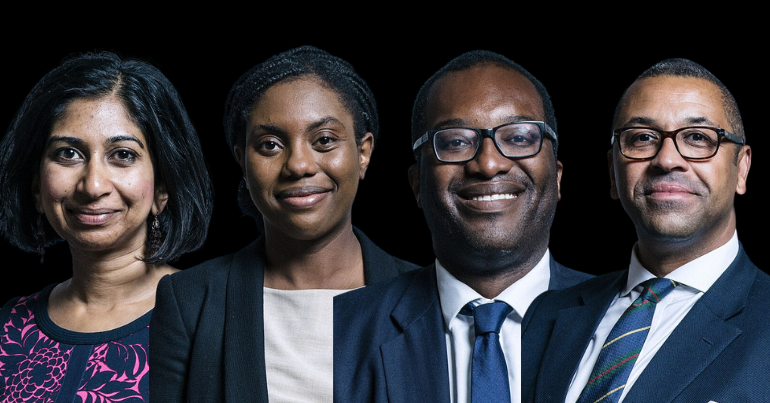 Liz Truss’ new cabinet has been praised, by fuckwits for being a diverse group of people. Some of the prominent roles have been given to Black and brown people. Suella Braverman is the home secretary, James Cleverly is the foreign secretary, Kwasi Kwarteng is the chancellor, and Kemi Badenoch is the international trade secretary.

The racial literacy in this country is so poor that the usual suspects have been calling this a win for diversity. However, diversity is not a metric to measure the opportunities for the participation of people of colour in society. Getting Black and brown faces into positions of power means very little if those same people don’t use their power to make life better for the most vulnerable people in society.

This may come as a surprise to some, but as well as having a race that isn’t white, Black and brown people also have class identities. One social media user pointed out how important class is to understanding “diversity”:

Anyone lauding the current cabinet as 'diverse' clearly has no real understanding of the term and views diversity solely as different skin colours. These people are all wealthy, privileged, greedy and power-mad. They couldn't be less diverse if they tried. #GTTO #selfservatives https://t.co/OxSR1VF9Rd

Don’t be fooled by this new ‘diverse’ cabinet.

Only 7% of the UK population attend private school yet 74% of the new cabinet were privately educated.

Class, wealth, and privilege remain at the root of the fundamental divides in our society.

What’s the point in trumpeting diversity when all of these people are rich and/or privately educated? They have the kind of opportunities that most poor Black and brown people couldn’t even dream of. They’re in these positions of power because they’ve chosen to act in the interests of power. This is all the more grating given that the praise heaped on this ‘diverse’ cabinet is based on fucked-up understandings of what representation and diversity are. Getting brown faces in at the top does nothing for the most vulnerable people in our society. In which case, what is the fucking point of this so-called ‘diversity’?

Skin folk are not kin folk

People who have patiently been pointing out this very thing for a long time are having to do so again:

Arguably the most ‘diverse’ cabinet in the history of UK politics has introduced possibly the most racist and regressive pieces of legislation this country has seen in decades.

It’s more than a little frustrating to deal with the same ill-thought-out positions again and again:

Academic Roger Luckhurst had a more tongue-in-cheek (if accurate) take on the matter:

That’s an amazingly diverse Cabinet: the first time in history all four horsemen of the apocalypse have held the top posts (also a promotion for Pestilence, congrats!) pic.twitter.com/TqErHk169t

The policies matter, not the people

Let’s take a look at their policies, then.

Suella Braverman is said to be even more right wing than Priti Patel. She’s expected to re-attempt deportations to Rwanda by sidestepping the European Convention on Human Rights. She’s criticised the civil service for being too “woke.” In a pattern the rest of her colleagues seem to be following, she’s set herself out as a transphobe via her insistence that schools shouldn’t comply with the use of a student’s pronouns if those pronouns don’t align with their gender assigned at birth.

Cleverly has a military background and, according to the site They Work For You, has never voted to allow same-sex marriage, generally voted against laws that promote equal rights, and has consistently voted for the mass surveillance of people’s communications. Declassified UK highlighted Cleverly’s record on Palestine:

In 2015, three months after he became an MP, lobby group Conservative Friends of Israel paid for him to visit Israel.

Kwasi Kwarteng has been described as Liz Truss’ “ideological soulmate“, and co-authored a book which the Guardian reported as a:

controversial libertarian tract [that] railed against a “bloated state, high taxes and excessive regulation” – complaints that Truss made a cornerstone of her Tory leadership campaign, neglecting her party’s 12 years in power.

🚨 Britain's new Chancellor Kwasi Kwarteng is extemely close to one of the world's most repressive dictatorships.

Bahrain, a nation in the Gulf ruled by the Al Khalifa family since 1783, paid for Kwarteng to visit in:

Kemi Badenoch, meanwhile, has made a name for herself in the right wing-manufactured culture war by railing against critical race theory. She also attacked journalist Nadine White, who is the first dedicated race correspondent at the Independent.

Not exactly a progressive bunch, are they?

Back in 2020, when we were taken on this same merryground of celebrating diversity, rapper Lowkey tweeted:

The most authoritarian and, in some ways, eugenicist policies are being pursued by the most diverse cabinet in British history.

Does "representation matter" as much as the policies?

Politics has become solely about optics. It’s not about building infrastructures that support vulnerable people. It’s not about creating a healthcare system that functions equitably. It’s not about providing safety nets of welfare and a universal basic income. It’s about the richest people hoarding power at the top of our political system. It doesn’t matter to these people if folks are freezing and starving to death in their homes, or if transphobic hate crimes are on the rise, or if anti-Blackness is flourishing.

If you’re stupid enough to fall for the lie that is diversity alongside no other metric, you deserve what you get. The rest of us are busy trying to survive the mess these people keep creating.