What could gene-editing mean for the UK's dairy cows? - Canary 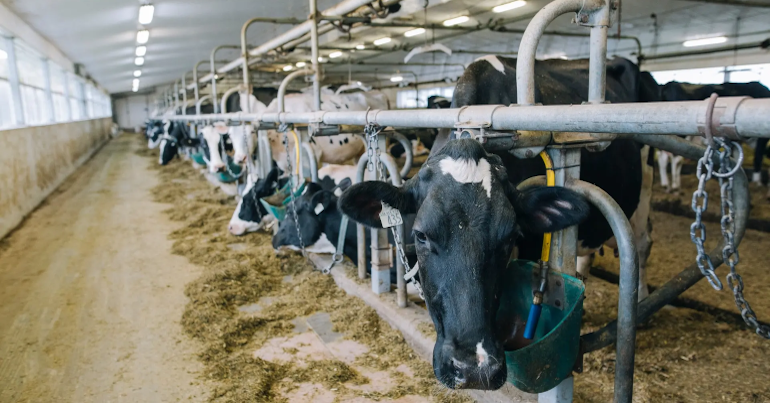 The UK government’s gene editing proposals could open the door to catastrophic developments in the dairy industry.

In May 2022, the government introduced a new gene-editing Bill into the UK parliament, named the Genetic Technology (Precision Breeding) Bill. The bill is currently making its way through the House of Commons.

The current proposals only relate to the gene-editing of plants, but with the stated intention of it being a step on the way to allowing gene-editing in animals.

The bill is being proposed despite a 2021 survey by the Department for Environment, Food and Rural Affairs (DEFRA), which showed widespread support for regulation of the technology.

The proposed Bill would put the UK out of step with the EU, where gene-editing faces tight regulations (although industry lobbyists want less restrictions there, too).

Anti-capitalist research group Corporate Watch examines what gene editing could mean for dairy cows, as part of a new report entitled ‘Dystopian Farm, the UK dairy industry and its technofixes’

Genetic modification by another name

There is a long history of resistance to the use of genetic modification (GM) in UK farming. Since the early 1990s a wide range of people in the UK have been involved in diverse campaigns that involved pulling up GM crops, and blockading supermarkets and offices.

A combination of widespread public opposition and direct action has meant that over the last decade the GM industry has remained on the backfoot in the UK. However, with the recent changes at EU level, it may once again become possible for a corporate onslaught.

Now Corporate Watch explains how the government’s new gene-editing proposals are a way to introduce a form of genetic modification through the backdoor:

Biotech lobbyists have sought to distinguish gene editing from GM in a bid to lose GM’s heavy baggage. Genetic Modification involves taking genes from certain organisms and inserting them into the DNA of another. Gene editing involves adding, removing or modifying the genes of organisms, but generally not mixing the genetic material of different species. However, many environmentalists do not distinguish between the two and believe that gene editing should be seen as a new technique of genetic modification (“new GM”).

Corporate Watch names four major research sites where gene editing is being developed. They are Rothamsted Research in Hertfordshire (which also has sites in Devon and Suffolk), the John Innes centre in Norwich, and the Roslin Institute in Edinburgh.

It seems like the industry has been on a public relations offensive, with gene-editing being touted in the mainstream and industry press as a solution to everything from old age to the cost of living crisis.

It’s even more dangerous when the technology is applied to animals. When a US company used gene editing to produce hornless dairy cattle, it unintentionally introduced genes from another species, making the cattle resistant to three antibiotics. It is clear that mistakes often happen when companies try to harness this technology, and that the corporations involved are resistant to scrutiny. It is feasible that the use of gene editing could result in new strands of disease-carrying bacteria that are resistant to antibiotics.

Campaigners also argue that gene editing will result in increased uniformity in plants and animals, and, as a result, their natural resilience to disease will decrease.

Gene editing will only take us further down the disastrous path of uniformity with the added risks involved in manipulating DNA itself.

A technofix to a problem caused by capitalism

The idea of creating gene edited hornless cattle is being marketed on the basis that it will do away with the need to physically remove the horns from cattle. Cattle currently undergo a dangerous and painful removal of their horns called ‘disbudding‘. The reason given for removing the horns from cattle is to prevent the cows from injuring themselves or others. However, the only reason these injuries occur is because of the cramped conditions the animals are kept in. Thus, creating gene edited hornless cattle is a technofix to a problem that has been created by modern industrial farming. According to Corporate Watch:

GE hornless cattle are promoted as a solution to the hassle and pain of disbudding. But that “need” is entirely the product of a certain farming culture, and in many parts of the world farmers do not remove the animals’ horns at all.

Corporate Watch’s report highlights how this new technology is being promoted in the service of corporate profit, rather than the welfare of the natural world. The government’s deregulation of gene editing isn’t motivated by our best interests, or the interests of dairy cows. It’s motivated by capitalism pure and simple, and should be resisted.

Tom Anderson is a part of the Corporate Watch cooperative.