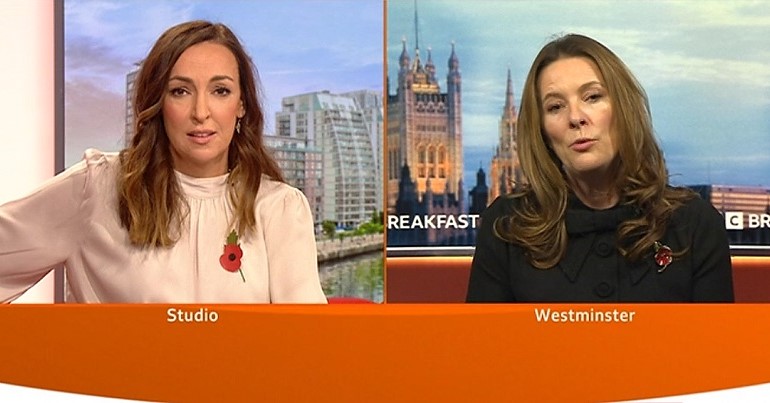 Gavin Williamson, former minister without portfolio, has resigned and Rishi Sunak is under pressure, making the new prime minister’s tenure already look wobbly. So, what do you do if you’re a loyal Tory MP? Go on national television and defend them both – even shocking the presenter in the process.

As the Guardian reported, parliament is conducting three inquiries into weasel Williamson. People have alleged he is a bully who issued threats of violence and intimidation. The Guardian claimed that:

Williamson allegedly told a senior civil servant to “slit your throat” and “jump out of the window”, in what they claimed was a bullying campaign while he was defence secretary.

It also noted that people have accused Williamson of using:

MPs’ mental and physical health problems against them, collecting “salacious gossip” about their “sexual preferences” and on one occasion telling [a former MP] to give [another] MP with financial problems a cheque and tell them: “I now own him.”

What a lovely guy. Of course, Williamson denies any “wrongdoing” – but not the actual words he allegedly used. Meanwhile, Sunak is under pressure over giving him a job in the first place – and then not getting rid of him as soon as people started making the allegations. The Guardian noted that Sunak stood by Williamson until the most recent allegations came to light.

However, and despite all of this, Tory MPs have fallen into line. The party rolled out the education secretary, Gillian Keegan, on breakfast TV to try and make it all look like slightly less of a shitshow than it actually is. Predictably, this didn’t go well.

‘Williamson has shown accountability’. No, really.

Keegan was on BBC Breakfast. Host Sally Nugent put it to the education secretary that Sunak:

promised his government would have integrity, professionalism and accountability at every level. Now, that just isn’t the case, is it?

Nugent may as well have not bothered – because the government had clearly briefed Keegan to deny everything the host said to her. However, the education secretary fluffed her words, saying:

No, that definitely is the case.  I’ve worked with him for many years. He has integrity, fabulous judgement, [he’s] professional – and accountability? I don’t think there’s anything more accountable than somebody resigning…

The BBC Breakfast host queried who Keegan was talking about – as it sounded like Williamson. Unbelievably, Keegan confirmed she did think Williamson had been accountable. Nugent then pushed Keegan further:

Let me just clarify… when you were talking about ‘fabulous judgement’ who did you mean?

Given Keegan’s defence of the disgraced Williamson, it was a fair question. Keegan doubled down, crossing her arms and saying:

Gillian Keegan – "That definitely is the case… he has fabulous judgement…" 👀#BBCBreakfast pic.twitter.com/2RjyE12lUZ

So, there we have it. The person responsible for the education of our children sees fit to defend two men, neither of whom are accountable or have integrity. Good on Nugent for pushing the issue – and shame on Keegan for not having the backbone to tell the truth.