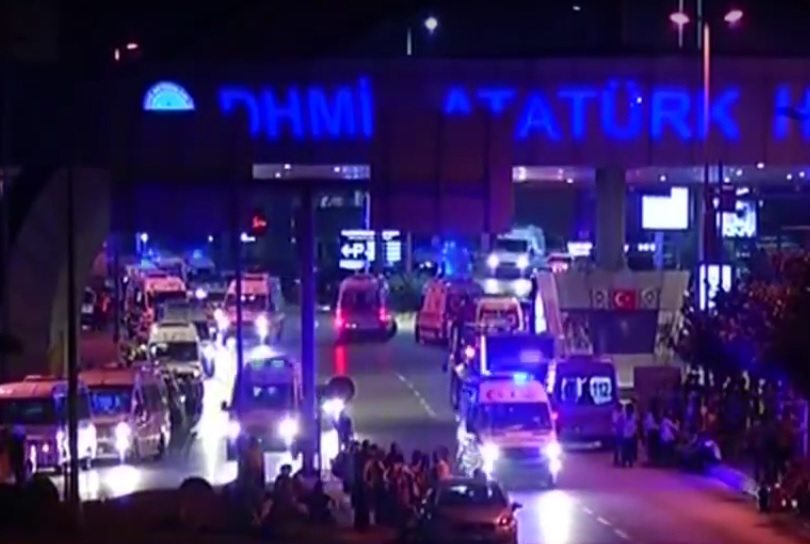 On 28 June, three suicide bombers with suspected links to Daesh (Isis/Isil) targeted the international terminal at Atatürk Airport in Istanbul, Turkey. At least 41 people were killed in this attack, and over a hundred more were wounded. What the mainstream media won’t explain in the aftermath, however, is the context behind this act of terrorism.

The first major Daesh attack on Turkish soil came on 20 July 2015, when the group massacred 34 left-wing activists transporting aid  to the devastated Kurdish town of Kobani in northern Syria. In October, the terrorist organisation struck the country’s capital city of Ankara, killing 102 peace activists and injuring around 500 more. Attacks in January and March 2016 in the city of Istanbul claimed 15 more lives.

Now, Turkish security forces believe that Daesh was responsible for the brutal attack on Atatürk Airport which saw dozens more civilians added to the long list of terror victims.

But since July 2015, Turkey has not waged war on Daesh.

Instead, it has waged war on its own Kurdish communities, whose opposition to the policies of President Recep Tayyip Erdoğan led the chauvinist strongman to destroy promising peace negotiations with left-wing Kurdish rebels in order to stay in power. From July onwards, Erdoğan sought to consolidate this power by courting the votes of Turkish fascists and pro-jihadi fundamentalists.

Erdoğan and his regime have since manipulated and suppressed the media to hide the reality of military curfews in Kurdish communities – which are thought to have killed many hundreds of civilians between August 2015 and March 2016. (The Canary has covered the war crimes and destruction in just two of these areas – Cizre and Nusaybin.)

In spite of the death and destruction caused in Turkey by Daesh-inspired terrorists, Ankara has only engaged in a few token attacks on Daesh, waging instead a full-blown war on the Kurdistan Workers’ Party (PKK) – one of the most effective anti-Daesh fighting forces on the ground in both Iraq and Syria.

In today’s Turkey, meanwhile, quasi-religious extremists have all too often been let off the hook. The current regime has been accused on numerous occasions of serving as a “mediator and ally” for Daesh and other jihadis in Syria, either directly or indirectly.

At home, authorities turn a blind eye to these fundamentalists. Just recently, when hundreds of thugs attacked citizens listening to Radiohead and drinking beer in Istanbul, authorities responded by firing tear gas and rubber bullets at the victims rather than the attackers.

Educated people in general have been a target of government repression over the last year. There have been many cases of them being denied permission to leave the country, and regime cheerleaders have openly expressed their hatred for the country’s most highly-educated citizens.

Western governments have ignored the deteriorating human rights situation in Turkey and its complicity with jihadi forces in Syria for far too long. As Ankara commands NATO’s second-largest army, the west believes it cannot afford to rub the Turkish regime up the wrong way. But the more Turkey’s allies look away from this reality, the worse the situation gets.

Citizens in the country live in constant fear of violence today. And the government’s soft response to jihadis and iron-fisted response to democratic demands is the main culprit. The west must seriously address this problem as soon as possible. The fight to defeat Daesh and bring peace to the Middle East depends on it.