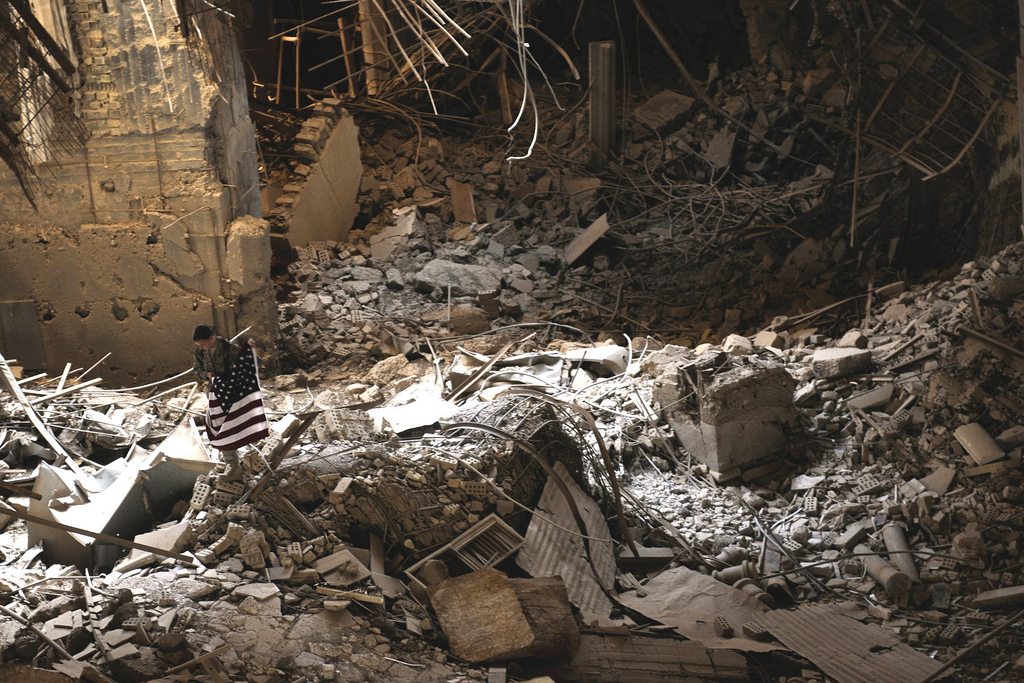 “Collateral Murder” – video graphically depicts US military gunning down innocent civilians in Baghdad, including two Reuters journalists. Video was leaked to Wikileaks by Chelsea Manning, to whom this series on US war crimes is dedicated.

The USA never had an inquiry into the Iraq War: how it began, whether it was approved on the basis of faulty intelligence, how the war was conducted, whether there were war crimes committed, and whether there was enough planning regarding the aftermath. The Bush Administration remained unscathed.

But the damning evidence is still there for all to see and, so, after the publication of the Chilcot Report on Britain’s role in the Iraq War it is timely to reprise that evidence, if only to remind ourselves of the dreadful things that happened, but also to help explain why the Middle East is as it is today.

The evidence is summarised in five parts – each examining a different aspect and published every day over five days. In Part One, I provide an overall picture of the numbers of fatalities involved in the war – and they’re not the sort of figures that the mainstream media (or Chilcot) refer to…

First the US Government claimed there was no official tally of civilian deaths in Iraq and Afghanistan, but the Iraq War logs (and Afghan War Diary) as published by Wikileaks and based on evidence provided by Chelsea Manning showed this claim to be patently false.

Thanks to Manning, Wikileaks and Wikileaks’ partners, the world did eventually see the figures. But these figures were largely based on US military counts. Other evidence, which is provided below, showed that these figues provided a gross under-estimation of the true numbers of casualties.

A respected British medical journal published a different set of figures, indicating not just thousands of Iraqi casualties, but on closer analysis, as many as one million, if not more – surely, a genocide in both name and fact?

Between 2004 and 2009, the US government counted a total of 109,000 deaths in Iraq, with 66,081 classified as non-combatants. However, according to the Iraq Body Count, the number of civilians killed since the Second Iraq War began to the present day was higher: between 160,543 – 179,492. Further analysis of the WikiLeaks’ Iraq War Logs added an additional 12,000 civilian deaths to that count.

But then along came even more figures – see both sections below…

1. Statistical analysis based on US figures, as leaked to Wikileaks

The following figures are quoted from three sources that analysed the US military statistics: the Iraq War Logs, the Iraq Body Count, and Wired.

a) Iraq War Logs
According to this source the minimum count of casualties recorded during the Second Iraq War was 109,000 fatalities. An additional 15,000 fatalities have also been counted. Note: these figures only cover the period up to mid 2010.
b) Iraq Body Count
This source provides a different set of figures of 160,543 – 179,492 fatalities – but these include fatalities listed to present day. This source also provides a database of individuals & incidents listed. An analysis of figures is also given.
c) Wired
A further update by Wired shows figures of 132,000 killed (but this includes figures for Afghanistan, too, and only up to mid 2011) – click here for more.

Note: every death was mapped by the Guardian.

Then came a more recent study by the Nobel-prize winning Physicians for Social Responsibility, which showed as many as 1.3 – 2 million Muslims were killed in the Iraq and Afghan wars that involved the US-led coalitions.

The PSR report was heavily critical of the figures quoted by the Iraq Body Count. For instance, the IBC recorded just three airstrikes in a period in 2005, when the number of air attacks had in fact increased from 25 to 120 that year.

According to the PSR study, the much-disputed Lancet study was likely to be far more accurate than IBC’s figures. In fact, the report confirms a virtual consensus among epidemiologists on the reliability of the Lancet study.

In an article in Middle East Eye, Nafeez Ahmed writes, “the US-led war from 1991 to 2003 killed 1.9 million Iraqis; then from 2003 onwards around 1 million: totalling just under 3 million Iraqis dead over two decades.” He adds that the overall figures of fatalities from Western interventions in Iraq and Afghanistan since the 1990s – from direct killings and the longer-term impact of war-imposed deprivation constituted “around 4 million (2 million in Iraq from 1991-2003, plus 2 million from the ‘war on terror’), and could be as high as 6-8 million people when accounting for higher avoidable death estimates in Afghanistan”.

(For anecdotal evidence of indiscriminate killings, see articles in Truth Out and Shadowproof . See also: “How the Pentagon is hiding the dead: The secret campaign to undercount the ‘war on terror’ death toll in the Middle East, Central Asia, and Latin America” by Nafeez Ahmed. For a detailed critique on how IBC is funded, click here.)

UPDATE: It is interesting to note there are moves underway to prosecute Tony Blair for misfeasance in office or, contrary to what has been stated to date, for war crimes. Last week an ICC (International Criminal Court) prosecutor issued a statement making it clear that comments on how Tony Blair could not be prosecuted for war crimes were “inaccurate”.

Meanwhile it should be understood there are still cases underway brought by Iraqi civilians in the British courts and at the International Criminal Court, alleging torture by British troops. The UK government has already settled 323 cases, totaling some 19.6 million pounds. In the UK courts the Iraq Historic Allegations Team has fielded 3,363 cases since it was founded in 2010, including 325 that involved unlawful killings by British troops. Further details on these prosecutions can be found here.