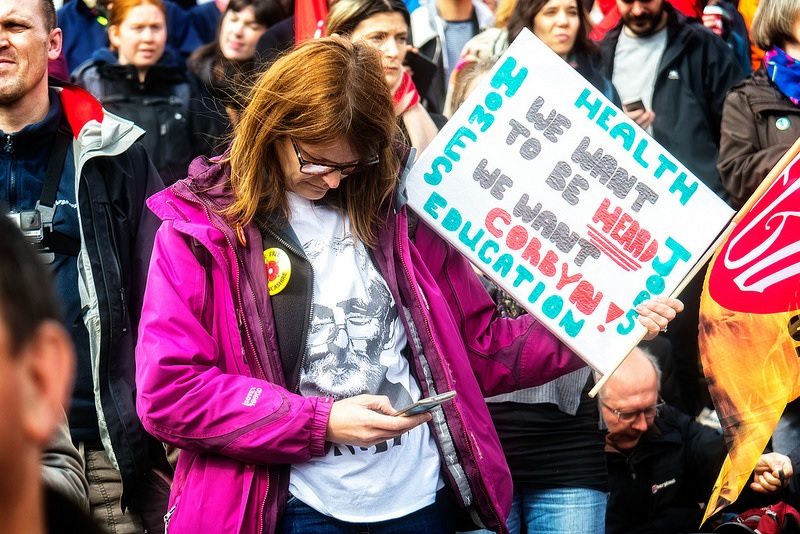 Many media pundits and politicians are quick to publicly condemn so-called ‘Corbynista’s’ if there is even a whiff of untoward behaviour connected to them. But, it’s unlikely these same critics will be very vocal about these two recent slapdowns, because they prove that their claims about the Corbyn crowd are, quite simply, made up.

Momentum is one of the major pro-Corbyn groups that is subject to criticism from the establishment crowd. It’s members are regularly blamed for any anger directed at Labour MPs involved in the attempted coup against Jeremy Corbyn.

More recently, though, Labour MP Emma Reynolds took aim at the campaign group’s finances. Reynolds, who resigned as a member of the Shadow Cabinet upon Corbyn being elected leader, called upon the electoral watchdog to investigate whether it has broken rules by “failing to declare the donations it has received to date”. She noted:

In February 2016, an internal document stated that they had received over £33,000 in donations as well as office space and leaflets as donations in kind, and a subsequent Guardian article claimed that their HQ was provided by the transport and travel union, TSSA. This week, Momentum announced that they were receiving £11,000 per day in donations. I am concerned that no donations have so far been listed on the UK electoral register.

When Reynolds initiated the probe, the move was covered quite broadly in the media. But, following the Electoral Commission’s response, there has been a stony newsfeed silence on the matter. Perhaps because the watchdog found in favour of the group, noting that Reynolds’ assertions lacked any “credible evidence”. It explained:

The media reports you refer to in your letter do not refer to individual donations or loans of over £7,500 or otherwise comment on any reportable individual or aggregating donations or loans that exceed the £7,500 threshold. Consequently, in the absence of credible evidence that a breach of PPERA has occurred, we will not be taking further action in this matter.

According to electoral rules, organisations only have to report donations to the Electoral Commission if they exceed £7,500. Donations of a smaller amount merely have to be deemed “permissible”, essentially meaning legitimate. And, as the watchdog notes, all of Momentum’s donations were below the threshold.

This is not surprising for a grassroots organisation. As a spokesperson for the group explained, contributions to the group come from “thousands of supporters” averaging about £7 a pop. But Reynolds seems oblivious to the notion of how grassroots movements tend to work. Such is the state of politics today.

The BBC also just faced a reckoning for circulating false claims of abuse by Corbyn supporters. In the lead up to the parliamentary vote on UK airstrikes in Syria, the broadcaster regurgitated a charge that an”intimidating” anti-war demonstration had taken place outside a Labour MP’s home – which MP John Woodcock suggested was a result of Corbyn “whipping up” opposition to the strikes.

The BBC later retracted the claim about the location of the demonstration, as it had in fact taken place outside Stella Creasy’s constituency office, not her home. But the broadcaster failed to correct its assertion that the demonstration was hostile, even after it was shown to be “peaceful and non-threatening“.

Following complaints about the coverage of the demonstration, the BBC has just been forced to print a correction and admit that its reporting was inaccurate.

Accusations of bullying and wrongdoing by Corbyn supporters are commonplace in both media and political circles. Of course, intimidating behaviour of any sort should be condemned, without equivocation. But the tendency to tar all Corbyn supporters with the same ‘hostile’ brush is wrong, and it is in some cases obviously intended to ensure that anything remotely connected with Corbyn’s leadership is tarnished.

Thankfully, these misleading claims are now being called out, and rightly so. Bullying should have no place in our political discussions, and neither should malicious smears. Civility isn’t a one way street, and it is time everyone woke up to that, especially those setting the narrative.

Read our other articles on the current state of the Labour party.