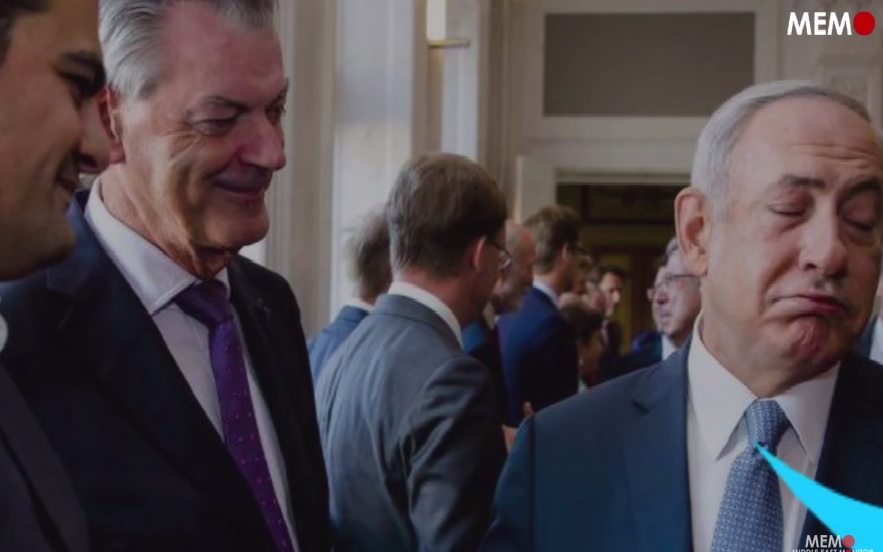 Israel’s Prime Minister Benjamin Netanyahu was taken to task by a Dutch MP on a recent visit to the Netherlands. The anti-racist MP refused to shake Netanyahu’s extended hand, in objection to the abuse suffered by Palestinians at the hands of the Israeli government.

The humiliating incident reportedly occurred prior to a meeting of the Dutch parliament at the Hague on 7 September.

The Dutch MP, Tunahan Kuzu, is a member of the Denk (‘Think’) Party. Kuzu used to be a member of the country’s Labor Party, but left to establish the new party after a dispute over the surveillance of Muslims, according to The New York Times.

As RT reported, the MP explained why he took the action on Facebook, saying:

While the streets of Gaza were reddened by blood that splashed out of the veins of children in the summer of 2014, the red carpet is rolled here… That deserves no handshake, but a reference to #FreePalestine.

Kuzu was wearing a Palestinian flag badge, and claims he confronted the Prime Minister off camera with photographs documenting Israeli abuse of Palestinians.

As Kuzu references, in the summer of 2014 Israel launched an assault on Gaza called ‘Operation Protective Edge’. The attacks left over 2,000 Palestinians dead, 475,000 displaced, and massive destruction of Gaza’s infrastructure.

Israel also continues to impose a siege on the area, which involves a naval blockade, ensuring the Israeli government controls every inch of Gazan life. It restricts the freedom of movement in the area, the amount of goods and materials that can enter, and the quality and quantity of essential supplies such as electricity and water.

Israel has even put the Palestinians in Gaza “on a diet” through the siege. It has determined how many calories the population needs to stay alive but not “flourish“.

Due to this, as the United Nations Relief and Works Agency (UNRWA) reported in July, around 80% of Gaza’s citizens are dependent on aid “to meet their basic needs”.

But even this essential aid may now be under threat. Israel has recently made a number of claims about aid agencies, accusing them of misusing funds. Some contributors have already suspended funding for these aid groups as a result of Israel’s claims.

With 80% of Gaza’s citizens dependent on this aid, removing it would be devastating.

Are you with Israel, or against it?

Netanyahu responded to the snub by recording a video on a flight later in the day:

PM Netanyahu: Today, we saw another clear example – of those who want peace and those who don’t. pic.twitter.com/E6FClNdF7E

In the short video, the Israeli Prime Minister accuses Kuzu of not wanting peace and says “those who wrinkle their noses, let their noses stay wrinkled”.

Netanyahu’s welcome from the Dutch Prime Minister Mark Rutte was more cordial. But as The Intercept reported, Rutte made clear that his government wants the Israeli settlements in seized Palestinian lands to be stopped immediately. He also pledged support for the labelling of Israeli goods produced in the occupied West Bank, and suggested that Dutch citizens would be allowed to take part in the Boycott, Divestment, and Sanctions (BDS) movement. The BDS movement aims to withdraw support from companies that help Israel’s occupation of Palestinian territories.

Israel’s Public Security Minister Gilad Erdan is currently in the UK to “battle” against the BDS movement. The minister has said BDS supporters “would have no rest” under his watch, and that they should “pay the price” for supporting the pro-Palestinian movement.

But as this Dutch incident shows, that “battle” is a hard one to win. Netanyahu may say that those who object to his government’s actions do not “want peace”, but these criticisms can be aimed directly back at the Israeli government itself, denying peace and security for the Palestinians.

A withheld handshake is indeed a very small ‘price to pay’ for that.

– Learn about the Boycott, Divestment, and Sanctions (BDS) movement.