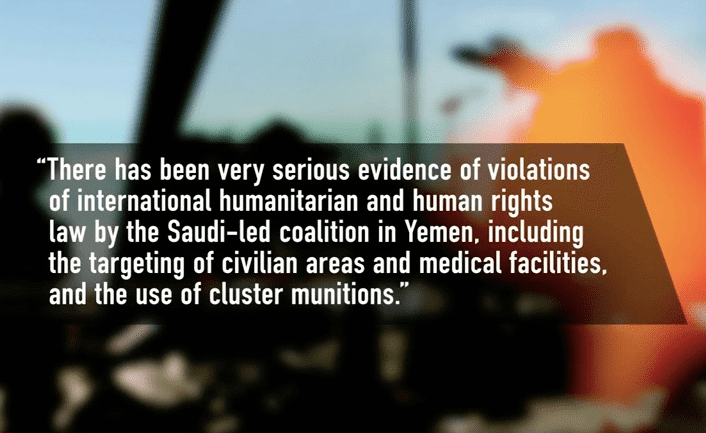 A parliamentary committee has called on the UK government to halt arms sales to Saudi Arabia until an investigation has been held. But the government is refusing, and is instead doctoring the committee’s report.

Still in its draft form, the BBC received the report from the Committee on Arms Export Controls (CAEC). The report’s findings are based on an inquiry CAEC held on UK arms being used in Yemen.

Saudi Arabia has been involved in a military campaign against the Houthi rebels in Yemen, who have been fighting the Yemeni regime since March 2015. In this campaign, Saudi Arabia has been accused of war crimes for targeting infrastructure and areas where civilian casualties could not be avoided.

The weight of evidence of violations of international humanitarian law by the Saudi-led coalition is now so great that it is very difficult to continue to support Saudi Arabia.

It made the recommendation that:

HM Government suspend the sale of arms, which could be used in Yemen, to Saudi Arabia until the independent, UN-led investigation has come to its conclusions.

But 130 amendments were proposed to the report by MPs on both sides of the political aisle, who have always been very pro-defence and pro-Saudi, as Gabrielle Gatehead outlined on BBC Newsnight on 7 September.

The amendments had the effect of watering down the report. Statements of ‘serious evidence’  were changed to mere ‘allegations’, and the call for suspension of UK arms sales to Saudi Arabia was removed altogether.

The government, it seems, has no intention of suspending sales to Saudi Arabia and has already laid the groundwork as a pre-emptive strike to the report.

Labour leader Jeremy Corbyn called on Theresa May to stop sales after the report’s conclusions were made known, referencing the humanitarian devastation being caused in Yemen.

Actually, what matters is the strength of our relationship with Saudi Arabia. When it comes to counterterrorism and dealing with terrorism, it is that relationship that has helped to keep people on the streets of Britain safe

What is at stake here is obvious, Saudi Arabia’s alliance is important to the UK. It has been the buyer of a third of all UK arms sales, amounting to £3.3bn, so upsetting the Saudis by insisting on an investigation would have a direct impact on defence sales.

The implications also go wider – Saudi Arabia is a big player in the global economy, as well as a long-standing political and diplomatic ally.

Simon Mayall MP explained, when giving evidence to the committee in April (which he reiterated on Newsnight), that the UK and Saudi Arabia have overlapping regional security concerns, which is the line the Tories are touting now. He also insists that Saudi Arabia would only go elsewhere to buy its weapons, probably from Russia or China. But unfortunately, keeping this ally and these sales is forfeiting the UK’s reputation.

Considering the huge cache of weaponry the UK provides to Saudi Arabia, there is a strong likelihood that UK arms are being used in these strikes, which warrants investigation.

A Yemeni human rights organisation, Mwatana, also found evidence of a British-made bomb being used in an alleged war crime, which was also submitted to CAEC.

Saudi Arabia has conducted its own investigation to assess whether it is liable for war crimes and has found itself innocent.

But, obviously, it is thought better for an independent and impartial panel to conduct the investigation. And in the original draft of its report, CAEC calls for the UK government to support this.

At least 10,000 civilians have been killed or wounded in Yemen. Independent monitors have found that many of those are due to war crimes on both sides of the conflict. The Saudi campaign has been specifically brought into question, and denying the possibility that UK arms are being used simply makes the UK complicit.

The test is not for there to be evidence that UK arms are definitely being used. The UK law explicitly states that arms exports should be suspended if it is suspected that they are being used for war crimes. The weight of that evidence to any objective observer is quite laden.

In the meantime, it’s a worrying indictment of the British government that it would allow thousands of innocent civilians to die on the basis of technicalities and, arguably, because of its dependence on an economy of war.

– Read other Canary articles on Yemen.

– Write to your MP and ask them to pressure the government to suspend UK arms sales to Saudi Arabia.