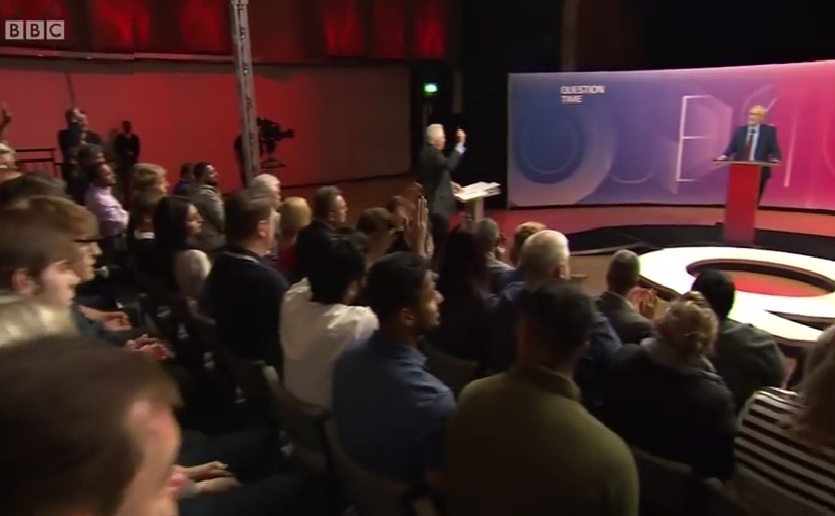 One member of the 8 September Question Time audience threw the key argument against Jeremy Corbyn’s Labour Party into turmoil. Unlike the myriad of Labour MPs who claim their party would lose the 2020 general election under the current Labour leader, this commentator’s experience has proved the exact opposite.

Keep your chin up, Corbyn

The audience member spoke during a discussion about poll results on the programme. The Labour leadership challenger Owen Smith had claimed that Labour has trailed behind the Conservatives in a number of polls during Corbyn’s time as leader, branding the party’s current position as “disastrous”.

But a longstanding Labour supporter responded with a very different perspective. He spoke (8:44 minutes in) about his contact with voters, and their general opinion of Corbyn’s leadership.

What I would like to say to you, Jeremy, is ignore some of the negative comments that are coming, because I’ve been a Labour Party supporter for a very long time, and I walk up and down the streets knocking on doors and do you know what? People love you. People want you to be the Prime Minister.

The audience erupted in applause at his comments. And once the clapping and cheering had subsided, he continued:

They want you to be the Prime Minister because you care about them. They know that you’re going to fight for justice…, education, employment. We want you.

This man’s door-stepping experience is vastly different from the Parlimentary Labour Party’s (PLP) assessment of Corbyn’s popularity among the wider electorate. Smith regularly invokes Corbyn’s inability to win a general election as justification for the current leadership challenge.

But this man’s account is certainly not an anomaly. That is obvious from the fact that thousands of people have joined the Labour Party since Corbyn’s election, totalling around 600,000 at present. This is three times the number of members the party had in May 2015. Many joined up specifically to ensure his continued leadership since the Labour coup and leadership challenge began. And his rallies continue to draw massive crowds, even in Tory heartlands.

The final moments of Question Time also revealed much about Corbyn’s popularity. As presenter David Dimbleby made clear at the beginning of the programme, the audience was made up of “Labour voters, evenly divided between the supporters of the two candidates, but also some voters from other parties, Conservative, Liberal, UKIP, Green”.

But, as even The Telegraph has acknowledged, there was one clear candidate the audience flocked to after hearing their views: Corbyn.

Of course, no one can truly know how Corbyn would fare in a general election until he’s faced one. But the notion that he’s destined to fail doesn’t stand up against the evidence. Especially not in the eyes of this member of the Question Time audience.