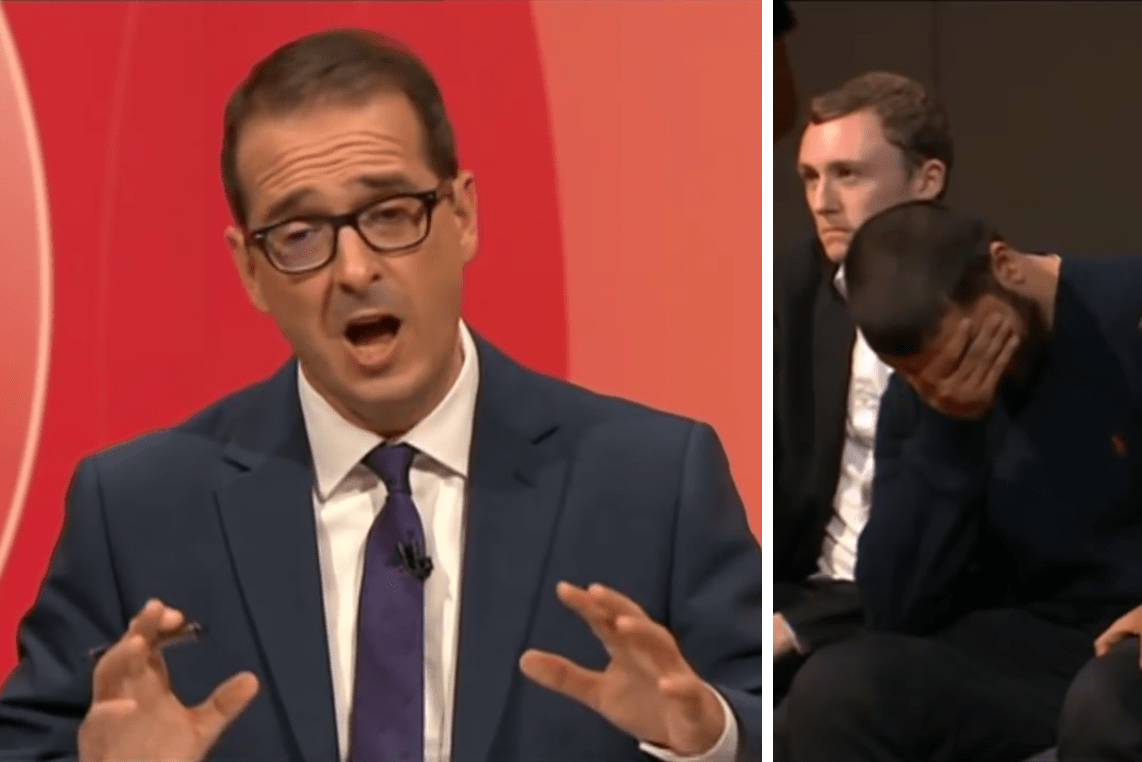 After an audience member called out Owen Smith’s support for the Prevent strategy, the leadership hopeful U-turned into a brick wall on BBC Question Time on 8 September.

The spike in hate crimes after Brexit appears to suggest that some viewed the vote as a licence to be racist. The audience member centred his question on the rise in Islamophobia:

There’s a lot of members of the Muslim community that also do not feel safe on the street. Islamophobia is also an up-and-coming issue that is affecting many people in this country.

Attempting to side with the audience member, Smith interjected:

But the audience member was having none of it:

You say definitely Owen, you’re the one that endorsed the Prevent strategy…

The audience member was referring to the live Labour leadership debate on 11 August, where Smith championed the Prevent strategy, saying:

…consider the issue of terrorism: I’d invest in our communities. The Prevent strategy, that is grossly undermined and under-resourced in this country, ought to be at the forefront of Labour’s policy, making sure we foster better community relations in Britain.

After being cut off by applause, the Question Time audience member continued:

Especially after many of the terrorist atrocities that occur around the world, the backlash is [against] the Muslim community – there’s hate crimes against them. There’s women who want to wear a headscarf who don’t feel safe to leave the house. So my question to you is what are you going to to make it safer for Muslims as well as the Jewish community apart from endorsing the Prevent programme which everybody is virtually against?

In response, Smith attempted to agree once again, claiming “it’s clearly not worked” and “it’s now seen by many as a racist project”.

But the audience member asked:

So why do you want to increase the funding?

Then, the leadership hopeful attempted to flip-flop:

I wanted to increase the funding in order to change it.

Smith’s latest U-turn was met by guffaws and laughter across the audience, sending him straight into a brick wall.

So why the controversy surrounding Prevent?

The Prevent strategy focuses on identifying risks of radicalisation early and has been introduced to schools and the NHS. The government implements this by training public sector staff to spot ‘radical ideologies’.

The programme has been met with staunch criticism on numerous fronts, including from the very people implementing it. Prevent requires teachers to report pupils who they suspect are likely to engage in terrorist activity or radical behaviour. The National Union of Teachers (NUT) condemned Prevent and called for an outright boycott, claiming it caused “suspicion in the classroom”.

Channel, a part of the strategy, “focuses on providing support at an early stage to people who are identified as being vulnerable to being drawn into terrorism”. This has seen children as young as four targeted for mispronouncing words.

The UN has echoed teachers’ criticisms, with the special rapporteur on the right to freedom of assembly, Maina Kiai, stating that:

By dividing, stigmatising and alienating segments of the population, Prevent could end up promoting extremism, rather than countering it.

Chiming with this criticism is the statistic that 90% of Prevent referrals lead to no action at all. In other words, 90% of the time, children or young adults were needlessly targeted by the state.

These views are backed up by a poll earlier in 2016 which found that one in four British Muslims view the actions of the police and MI5 as being responsible for the radicalisation of young people. A spokesperson for the Muslim Council of Britain stated:

For many, current counter-terrorism measures, particularly related to the Prevent strategy, actually lead to greater alienation as Muslims are seen through the lens of security, rather than tackling the scourge of terrorism itself.

The true aim of Prevent?

Considering how badly Prevent has been received, one may find it confusing that the government continues with it. But there are ways Prevent can help the government maintain its grip on power.

Prevent is notoriously vague on its definition of ‘radicalisation’, and has been misused to target social movements exercising basic democratic rights, including Occupy and the student protests.

Aside from Prevent, the government is currently using its ‘domestic extremism’ police unit to spy on the Green Party, environmental activists, and children. So it would be naive to think that the government does not have its own motives for these schemes.

Meanwhile, Project Fawn is another Prevent scheme aimed at nursery children. Within a presentation on Project Fawn seen by The Guardian, the codes “xrw” and “xlw” are referred to. These are acronyms for “extreme right-wing” and “extreme left-wing”.

Targeting nursery children with arbitrary labels that are unrelated to acts of terrorism should be worrying for us all. Being prepared to use violence politically determines whether you could become a terrorist, not whether you are perceived by someone as “xrw” or “xlw”. Policing people’s political views from a young age may be seen as at odds with a healthy democracy.

What’s also very worrying is Smith, who hopes to be leader of the Labour Party, saying Prevent should be at the “forefront” of policy.

Well done to the audience member who called him out on it.