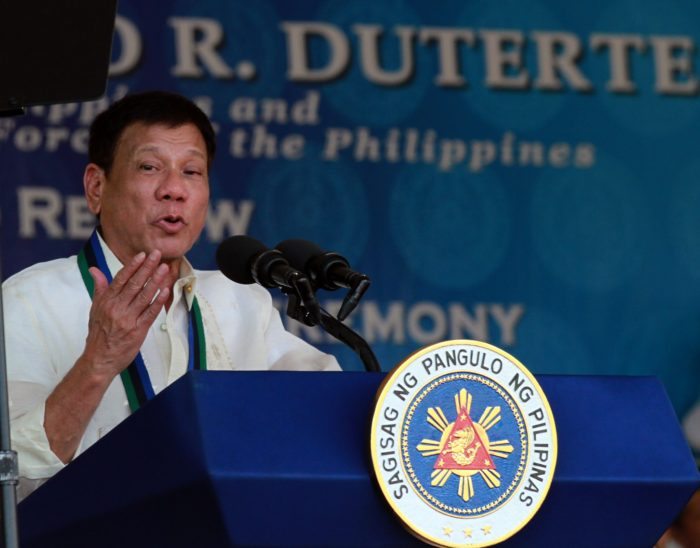 Filipino President Rodrigo Duterte wants to be seen as a hardliner in the ‘war on drugs’. But in reality, he risks being seen as a cold-blooded killer with genocidal tendencies.

A fan of mass murder?

Duterte has always been a controversial politician. But he recently caused outrage by likening his war on drugs to Hitler’s extermination of Jewish civilians in the 20th century. He said:

Jewish leaders were deeply troubled by the remarks, but not just because they understated the extent of the Holocaust. World Jewish Congress President Ronald S. Lauder argued:

What President Duterte said is not only profoundly inhumane, but it demonstrates an appalling disrespect for human life that is truly heart-breaking for the democratically elected leader of a great country.

While some may regard Duterte’s comparison of himself to Hitler as an offensive blunder, others have echoed Lauder’s claim that it shines a light on the president’s lack of respect for human life and dignity.

A leader hell-bent on violence

A brief glance at Duterte’s history shows him to be a violent character, having already earned the accolade of ‘Death Squad mayor’ when he served as mayor in Davao (on the traumatised and embattled island of Mindanao) for more than two decades:

But far from tarnishing his reputation, Duterte remains unashamed (if not proud) of his title, saying:

Am I the death squad? True.

In a sense, Duterte is following in the footsteps of former president Benigno Aquino III, who Human Rights Watch criticised for allowing extrajudicial killings to continue.

Now that Duterte is President of the Philippines, his violent anti-drug war has intensified, causing concern in the United Nations, the United States, and the European Union.

Around 3,000 people have now been killed in Duterte’s crackdown on drug addicts and dealers, many by means of extrajudicial killing. Critics have slammed Duterte’s policy because they say it targets poor citizens, who trade drugs in order to make a living.

He is also placing bounties on the heads of corrupt police officers involved with drug dealers, and gave a speech encouraging drug users and dealers to kill drug lords.

Treating drug use as a health issue

The Philippines has a major drug problem – with 1.8% of the population currently using harmful drugs like crystal meth. But in a country permeated by corruption and led by a man fixated on violence, matters may get much worse for the most vulnerable people in Filipino society before they get better.

The UN is right to condemn Duterte’s violent methods but, if he was to copy the UN’s own approach to tackling drugs, it would still be a failure – resulting in immense suffering and waste of resources.

There is ample evidence to suggest that criminalising drug use exacerbates problems associated with drugs, as the Portugal experiment illustrates. Portugal decriminalised the possession of all drugs for personal use in 2001, and treated drug addiction as a health problem rather than a crime. So far, drug use has declined, as have rates of HIV, drug-related deaths and crimes, and murder.

Duterte’s recent comments about the Holocaust show a dangerous lack of compassion towards drug addicts. His bravado and calls to violence may create a façade of ‘getting things done’, but his only achievements will be an unnecessary death toll and increased havoc wreaked on the families who’ve lost their loved ones to the world of drugs.

International pressure must now be brought upon Duterte to encourage him to use more effective, tried-and-tested approaches to tackling drug addiction. If not, his killing spree will just continue.

– Support Amnesty in speaking out against Duterte.