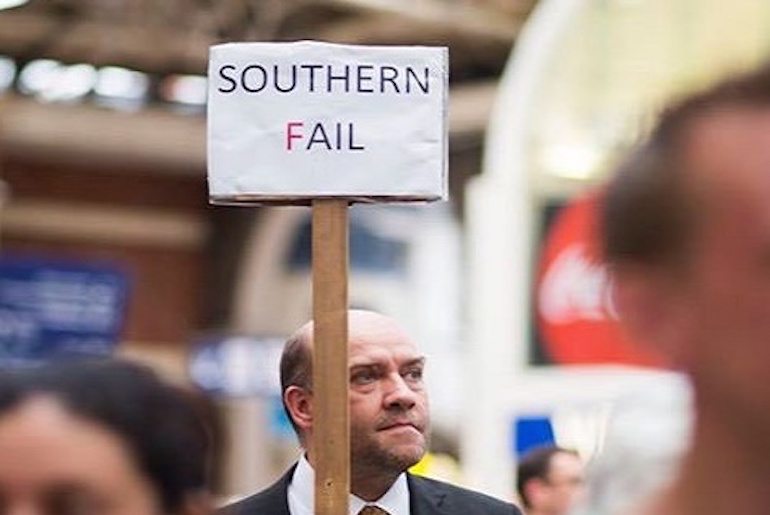 Shambolic train operator Southern Rail gave a lesson in how not to do social media engagement on Monday 3 October, after a tweet severely backfired. The private rail operator is currently engaged in a protracted industrial dispute with the National Union of Rail, Maritime and Transport Workers (RMT). So it thought it would try and get commuters to complain to the RMT. But it didn’t quite work out like that.

The rail operator has hit the headlines on numerous occasions this year. The parent operator of Southern Rail, Govia Thameslink, is rated as the worst rail company for punctuality, with just 81.5% of trains arriving on time. It was named the worst rail company in the National Rail Passenger Survey. The Rail, Maritime and Transport (RMT) union is in a protracted industrial dispute with Southern Rail over jobs, working conditions and passenger safety. And as The Canary previously reported, ticket prices are set to go up by 1.9% in England, Scotland and Wales from January 2017.

Southern Rail is currently subject to direct action from a group of passengers. The Association of British Commuters (ABC) has been holding numerous demonstrations, the most recent one being on Thursday 29 September. With the fact that Southern Rail’s passengers are so disgruntled by the service, the company decided to hit back at the RMT, with some targeted marketing:

Time to get back on track. Tweet @RMTunion & tell them how rail strikes make you feel. https://t.co/IVaRAGBBSV #SouthernBackOnTrack pic.twitter.com/lpBcXs9K5f

But sadly for Southern Rail, it did not get the response it wanted from social media users. In fact, most people used it as an opportunity to slam the rail company’s disastrous record. One user was not messing around:

the strikes make me feel like the franchise should be taken out of your control and renationalised. @RMTunion

‘Phil BC’ and ‘Brownalicious’ rightly pointed out the reality of what Southern Rail tweeted:

Hello Southern Rail. Why do you think it's a good idea to invite members of the public to berate your employees?

Even those who appear not to support unions could see the problem here:

you are kidding? I dislike unions but I dislike incompetant management more. You provide the service – get on with it.

Someone pointed out that Southern Rail thought it was a good idea to take not one, but two full-page adverts in Metro as well:

and pages 2&3
of the metro pic.twitter.com/o5OJUw6unT

But one Twitter user took Southern Rail’s tweet as an opportunity to vent all the pent-up anger that’s obviously been building. This thread is epic: 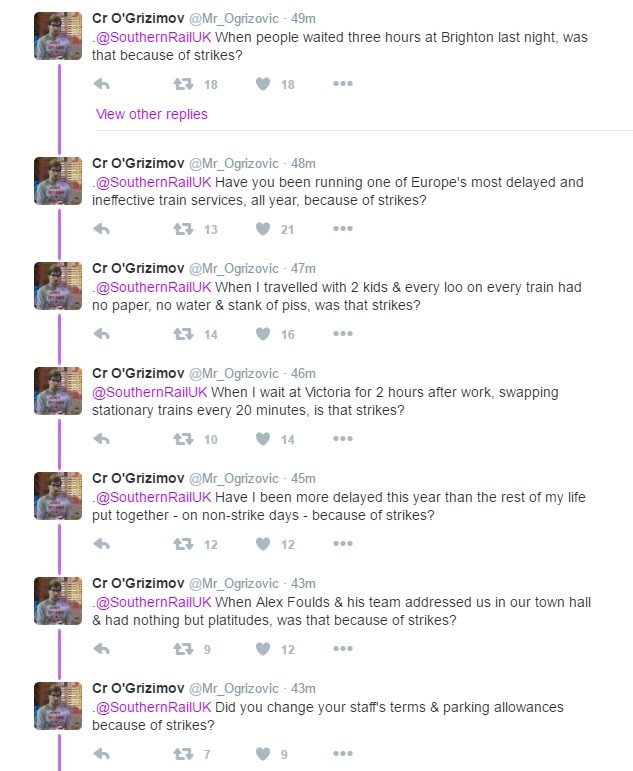 The Tories aren’t off the hook, either

The ABC, along with protesting about Southern Rail, is taking legal action against the Department for Transport (DfT). As The Canary previously reported, the ABC is seeking to bring a legal review against the DfT. If the government is found to have not fulfilled its duties, a court can make an order declaring the DfT’s actions unlawful. This will stop it continuing in its course of action and require it to take steps to sort the crisis out. ABC has launched a crowdfunder, with an initial target of £25,000. And in less than a month, it’s already raised over £21,000.

After last week’s protest, the ABC told The Canary:

Having been front-line witnesses to the unravelling of Southern Rail through the course of the last 18 months, we are well aware of the long-term and entrenched mismanagement behind it. This is all the more troubling that… the company is paid a flat fee to run the network. It’s incomprehensible that a shambles of the scale of Southern Rail should be allowed to continue.

Rather than sticking up for passengers who are suffering the country’s worst rail service, the government have defended Southern Rail to the hilt, allowing them to miss performance targets and cancel hundreds of trains a day. It’s unacceptable that commuters have to resort to legal action to hold Southern and the DfT to account.

It would appear that not only do Southern Rail not have a clue how to run a train company, they don’t know how to do social media either. And the fact that there appeared to be not one tweet in support of the rail company maybe shows that commuters have had enough of the aptly named ‘Southern Fail’.