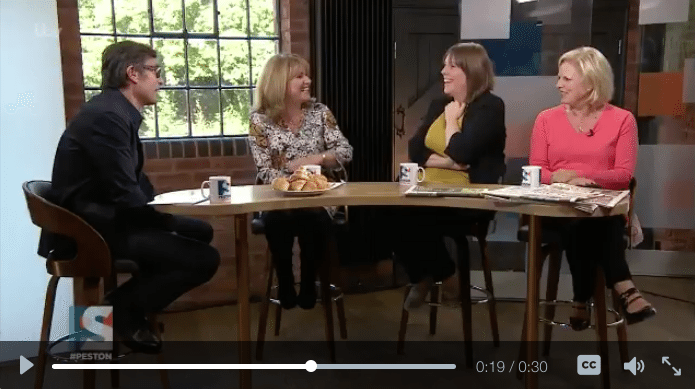 The bullying and haranguing of female MPs is wrong, according to Labour MP Jess Phillips. Unless of course, the female MP is black, backs Jeremy Corbyn, or both. The MP who has been so vociferous in her condemnation of even the slightest piece of snark on Twitter has a quite breathtaking double standard when it comes to her own behaviour.

This trolling of women MPs has to stop. Except for Black Women MPs. Trolling Black Women is still fair game. pic.twitter.com/DAQGpX9W51

But many viewers took to Twitter to share their disgust at the impression, and the failure of Phillips – a self-styled advocate for women in parliament – to speak up about the issue of a panel of middle-class white people mocking the voice of a black MP.

sometimes I wonder if Jess Phillips has ever stopped to think how hurtful it is to see a literal MP being so vile to a black woman.

Black female Labour MP Kate Osamor, Shadow Secretary of State for International Development, seemed to show support for Abbott and condemnation of Phillips and her peers, sharing two critical tweets on the issue. 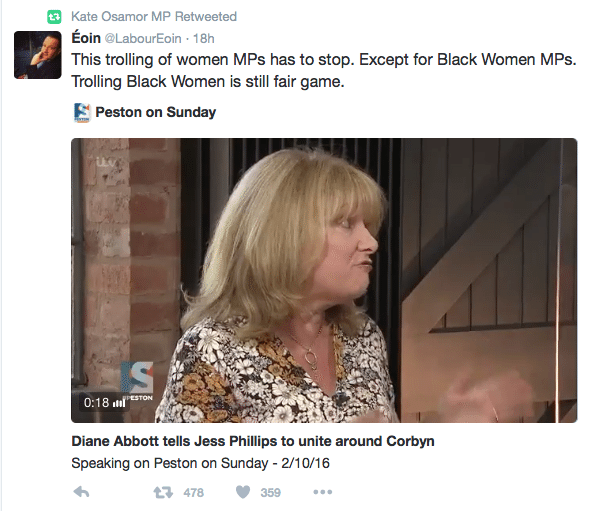 For others, there was a kneejerk ‘oh god, here come the PC police!’ reaction – which is fairly unhelpful. But some had genuine questions: how is this impression fundamentally different from the frequent political impressions we see routinely portrayed on our TV screens?

The answer, in this case, is that the skit used by Ravens plays into well-worn racist tropes about the scary, angry, black woman. At one point, Peston literally asked Phillips: “are you feeling scared over there?” Because, you know: scary, angry, black lady alert.

It also adds to an almost unprecedented level of abuse faced by Diane Abbott, who is routinely verbally assaulted in person and online as the twin fronts of racism and sexism open upon her. The tweets below give you a hint of what Abbott faces daily.

When Abbott isn’t being derided by racists as an ape, she’s being derided by misogynists as either too shouty or too lustful. Every commentator from Channel 4’s Michael Crick to comedian Reginald D Hunter has made hay from the idea of a Corbyn-Abbott liaison. This overlapping of racism and misogyny is known as misogynoir.

Hunter gets great laughs in one of his London shows by equating David Cameron allegedly placing his genitals in the mouth of a dead pig, with Corbyn allegedly ‘f*cking a pig too’ – meaning Abbott.

In this context, one would at least expect Phillips to offer some support to a fellow female MP facing continued racist and sexist abuse. Quite the opposite. In fact, she called for the deselection of Diane Abbott as a Labour MP last year, as The Mirror reported at the time:

Phillips has since suffered selective amnesia about the entire incident. 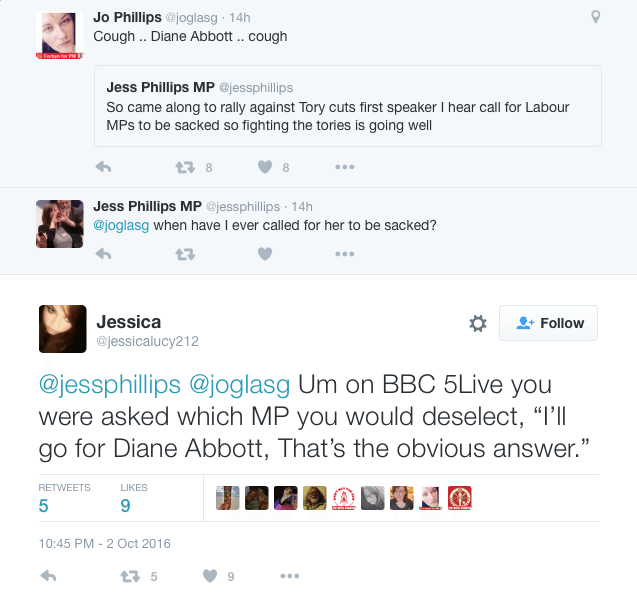 And therein resides the problem with Phillips and her counterparts on the anti-Corbyn, anti-Abbott, anti-anything-not-them wing of the Labour Party. They will merrily seize upon even the most bogus claims of abuse in order to weaponise identity politics against their opponents. Meanwhile, they display the most brutish and toxic attitudes to marginalised groups themselves. Perhaps one of the most vivid examples of this came from former Labour member and Mail columnist Dan Hodges (who is not Jewish), when he gave this response to a Jewish writer who politely requested Hodges and his commentariat friends quit using him as a political football.

Phillips, Hodges and others are as much use to the communities they profess to support as a chocolate teapot. The only use these groups have is to serve as fodder for their self-conscious and self-satisfied virtue signalling: Look, aren’t we progressive? Just make sure you let us speak for you, and never challenge us – or we will crush you.