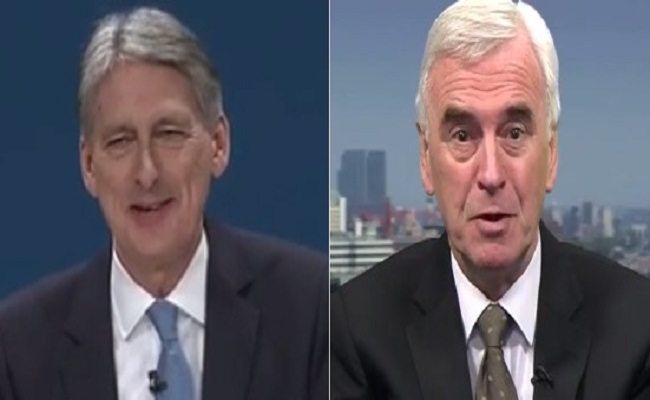 Shadow Chancellor John McDonnell has slammed Chancellor Philip Hammond after his speech to the Conservative Party conference, claiming he has “borrowed” policies from the Labour Party. But he went further, saying that the Tories have presided over the growth of a “dangerous divide in society”.

The most boring speech in 20 years

McDonnell’s comments came after Hammond gave his headline speech to the Tory conference in Birmingham on Monday 3 October. Described by The Guardian‘s Andrew Sparrow as “the most boring speech delivered by a chancellor to a party conference for at least two decades”, it outlined the following policies:

The BBC’s Political Editor, Laura Kuenssberg, described Hammond’s speech as ‘unflash‘, with a lot of talk about improving ‘productivity’ but no actual ideas on how to do it.

McDonnell was less than impressed, saying in a statement that:

This morning Philip Hammond may have performed a u-turn on investment spending, admitting that the failed ‘long-term economic plan’ never really existed, [but] he still intends to go ahead with cuts to in-work benefits, and local authority funding.

Hammond didn’t directly ‘admit’ that Osborne and former Prime Minister David Cameron’s “long-term economic plan” didn’t exist. What he said was that those policies were “right for the time”, and that he would “set out a new plan, for the new circumstances the UK faces”. Hammond described this as doing economics in “a pragmatic way that reflects the new circumstances we face”, but warned of a Brexit “rollercoaster” ride.

But this ‘sensible’ approach didn’t wash with McDonnell, who claimed that only Labour now supported “patient” long-term investment. He then outright accused Hammond of stealing Labour policies, saying:

…it’s clear that Philip Hammond is now borrowing from Labour to invest in his own speech. As well as abandoning their own fiscal charter this was full of the same empty promises George Osborne made, only with worse gags.

The “gags” McDonnell was referring to were ones aimed at former Shadow Chancellor Ed Balls, and his appearance on Strictly Come Dancing. In humour that The Mirror’s Kevin MaGuire said was “drier than a chicken”, the Chancellor ‘joked’ of Labour that:

Ed wasn’t their first choice for Strictly. They were going to ask Corbyn to do it but then someone told him he had two left feet. I don’t want to sound like Craig Revel Horwood but I expect his Charleston is probably better than his economic analysis.

But McDonnell found little to amuse in the Chancellor’s speech. He concluded that:

The chancellor should apologise today for the failed Tory approach that has meant he has had to abandon the failed economic agenda of the last six years, an approach which has seen them dragging their heels on tax avoidance, an increase in child poverty, and house-building falling to its lowest peacetime rate since the 1920s. The dangerous divide in society the chancellor mentioned has come about as a direct result of the policies he has voted for since 2010.

And McDonnell may well be right. With child poverty having rocketed, the Tories apparently borrowing more in six years than all Labour governments combined, and inequality levels through the roof, the country may well be facing a “rollercoaster” ride with Brexit. But after six years of Tory rule, most people in the UK are used to ups and downs. And it’s a damning indictment that the only ‘ups’ seem to have been for the richest in society.

– Read The Canary’s other articles on the Conservative Party conference.