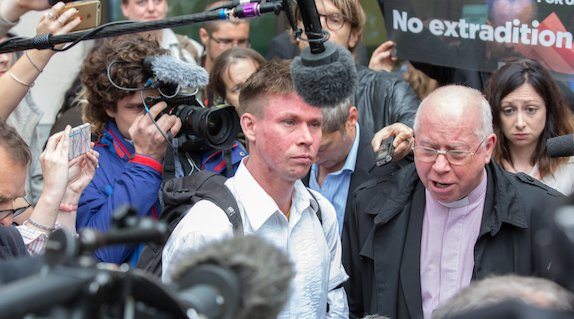 If Washington DC has its way, a British citizen with Asperger’s Syndrome will be extradited to the US for a ‘prank’. This could see him face 99 years in prison.

Lauri Love is a computer scientist who advises on computer security. He is also a political activist who has been accused of taking part in the hacking of websites belonging to the FBI, NASA and the US Federal Reserve. No evidence has been produced to support these allegations, and Love not only denies them but states that the hacking attacks referred to were clearly just “prankery”.

The UK courts have ruled that Love is now subject to US extradition applications. He is expected to appeal that decision in the High Court and, if necessary, in the European Court of Human Rights, as he believes he will not get a fair trial in the USA. Also, if found guilty, he fears he won’t be able to tolerate the US prison system and could commit suicide.

But this case is not just about Lauri Love. If his appeals are lost, it means UK judicial sovereignty will be subjugated to US demands. His lawyers argue that, just as US citizens who commit alleged crimes on US soil are not subject to extradition, Love’s alleged crime (committed on UK soil) should be afforded that same right.

His lawyers also point out that his extradition should be refused under a part of the Extradition Act 2003 which was introduced after former Home Secretary Theresa May blocked the extradition of Gary McKinnon – who allegedly hacked into NASA and who also suffered from Asperger’s.

But why did the ‘pranks’ happen in the first place? Well, they came in response to the death of another young man – Aaron Swartz – and the circumstances surrounding his own prosecution. And there’s far more to this story than meets the eye.

The link between Lauri Love and Aaron Swartz

If you’ve ever used RSS, Creative Commons, or Reddit, you have the late IT genius Aaron Swartz to thank. But as with Lauri Love, Massachusetts-based Swartz was threatened by the US justice system with decades of imprisonment.

Swartz was accused of downloading five million academic articles (via a Massachusetts Institute of Technology (MIT) server) from the academic database JSTOR. Hardly the crime of the century. More like the sort of thing that should have resulted in a proverbial ‘slap on the hand’. Instead, Swartz was threatened with multiple charges, including computer and wire fraud, which were later upgraded.

In the end, Swartz committed suicide at the age of 26 rather than face the prospect of prison and possible bankruptcy.

Despite Swartz’s tragic death, the US government refused to ensure that what happened to him wouldn’t happen again. And that refusal led to an act of political protest involving hacktivists – one of whom is alleged to have been Lauri Love.

Why Swartz was prosecuted

According to his indictment, Swartz registered under the name Gary Host and, over several months, allegedly hooked up a laptop to download the JSTOR journal articles. He was no professional thief, but he was threatened with up to 35 years in prison.

Aaron Swartz was not the super hacker breathlessly described in the Government’s indictment and forensic reports, and his actions did not pose a real danger to JSTOR, MIT or the public. He was an intelligent young man who found a loophole that would allow him to download a lot of documents quickly. This loophole was created intentionally by MIT and JSTOR, and was codified contractually in the piles of paperwork turned over during discovery.

Overreach by the US government

But prosecutional overreach by the US justice system is nothing new. In recent years, it has notably been applied to others who support the freedom of information. These include:

The tactic of the US justice system appears simple: deflect any criticism of alleged US government wrongdoings by throwing every possible charge at individuals who expose them – to ensure maximum sentencing and incarceration. There also appears to be a level of vindictiveness, as evidenced by the recent two weeks of solitary confinement metered against Chelsea Manning for trying to commit suicide.

With Lauri Love, the US government is now trying to flex its muscles in the UK, too.

For more on the circumstances of Swartz’s suicide, the reaction to it, and the part played by the US Secret Service, see Part Two of this article which will be released on 4 October.