The world's banks are about to screw you out of everything, and now it's too late to stop them [VIDEO] - The Canary

Most countries have barely begun to recover from the bank-created Financial Crisis of 2007/8. But it turns out that those same banks are about to shaft the public all over again. And it’s too late to do a thing about it.

Interest rates are at an all time low. They’ve continued to drop over the last couple of months, making investments for the standard investor effectively pointless. Lloyd’s Bank recently announced further cuts to its standard saver rate, dropping it from 0.25% to just 0.05%. But while the standard investor continues to suffer, billionaires and bankers (who know the system) are stockpiling gold to protect themselves from an imminent global financial crash.

Traditionally, a nation’s central bank needed to back its fiscal currency (paper money) with a physical asset of value. Previously, this was gold and silver. But over the last few decades, as the stock market has moved into the digital space, banks have moved away from stockpiling these assets.

Many countries have sold their gold for fiscal currency, including the Netherlands, Switzerland and Canada. Between July 1999 and March 2002, the UK Government followed suit, selling 395 tonnes of gold — around 58% of its total reserves. And for years, countries like Germany and France also chose to house their gold reserves across the world rather than stockpiling them at home.

Ben Bernanke, ex-Chairman of the US central bank, admitted in 2011 that banks only hold gold for tradition and didn’t actually believe it was a form of money.

the reason people hold gold is a protection against tail-risks — really really bad outcomes. And to the extent that the last few years made people more worried about the potential of a major crisis, then they have gold as a protection.

But things have now dramatically changed. These countries are now trying to buy back their gold. Germany is desperately attempting to repatriate its stocks, and bankers are actively buying shares in gold and gold mines.

But why are these countries now suddenly investing in gold?

The world’s central banks are desperate to get back their gold reserves. As reported in The Guardian: “Nations are ditching currencies to buy gold again, raising stocks by 10% since [the last] financial crisis”. Gold prices have continued to increase year on year, and it is one of the only assets that has retained its value during the financial crisis.

As the images below show, gold continues to grow in value, while its big rival – the dollar – constantly fluctuates. 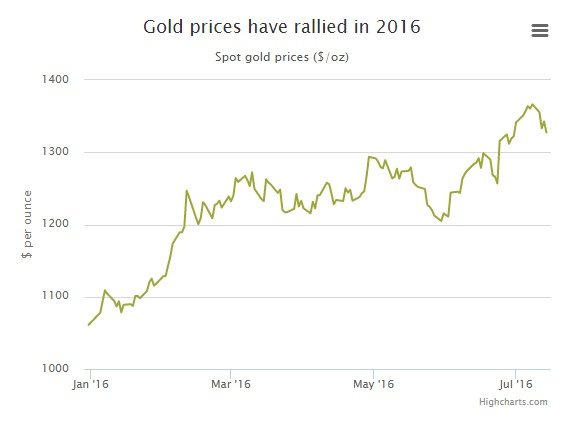 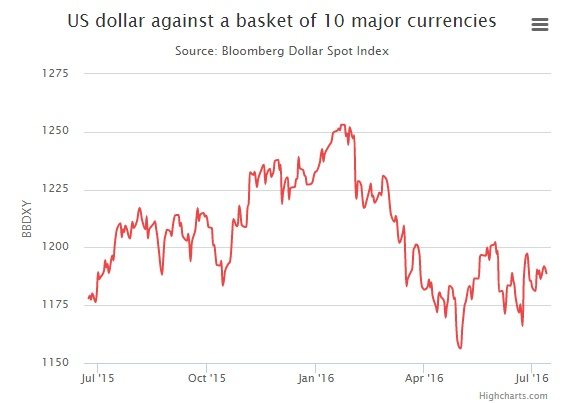 The sudden demand for gold has seen countries like Switzerland reverse their own policies on the matter. Back in 2014, Switzerland held a referendum about whether to buy back some of its gold reserves. A massive majority voted against it. But in a sudden about-face, Switzerland started investing heavily in shares in gold and silver mines at the start of 2016. In order to do this, the Swiss central bank reportedly just printed around $1bn dollars out of thin air.

Russia and China have also been aggressively buying gold throughout 2016. In addition to buying physical stock, China’s Shanghai Gold Exchange launched a new benchmark price fix in April. The new benchmark challenges the one long-established by the London and New York exchanges, and solidifies China’s involvement in the emerging gold market.

Likewise, in July, the Tokyo Commodity Exchange Inc. launched a new gold physical transaction forum. This enables traders to trade solely in gold, validating its current importance in the market.

Despite housing its reserves across the world for years, Germany’s federal bank (the Bundesbank) also announced in 2013 a plan to retrieve its reserves from Paris and New York. With total reserves standing at around 3,384 tonnes, worth about €120bn, the bank plans to retrieve at least half of this by 2020.

Many bankers and billionaires have caught on and are now investing heavily in gold.

Billionaire investor George Soros —who made billions on Black Wednesday, the London stock exchange collapse in 1992— has recently moved a large percentage of his investments into gold, acquiring a $264m stake in bullion producer Barrick Gold.

Likewise, in July, British billionaire Crispin Odey allocated 86% of his entire assets to gold investments. In a report on the investment, Odey stated:

If we are at the limits of QE [quantitative easing] and financial repression, central banks, in the developed world, are at least doing a very good job at printing money. Every chance is taken to push some money printing through.

And this is where gold comes in. Gold was the original currency. It came out of distrust of governments and was chosen because it could not be manufactured at will.

Today, world GNP stands at $75 trillion and world money supply stands at around $83 trillion – some ten times its level at the start of the millennium. So central banks have printed over $80 trillion of money, backed by only $1.27 trillion of gold.

In the statement, Odey acknowledges that banks have printed excessive amounts of money and do not have the physical asset (i.e. gold) to back it up. As such, this printed money is essentially worthless and, in a financial crisis, gold is the only currency that will retain its value. This is why he’s investing in it.

Deutsche Bank (a global banking service in Germany) is currently experiencing major problems, with some investors fearing the bank could collapse and endanger the wider financial system. Loaded with risky financial trades, the recent turmoil has been enhanced by the US demanding a $14bn repayment which has seen share prices plummet.

On 1 and 3 October, Deutsche Bank closed its ATMs temporarily, leaving hundreds of German citizens unable to access their own money. And while the bank claims there was an “IT outage”, the event has left some speculating about a potential crash and its consequences:

Will #DeutscheBank topple the world's #finance ecosystem? Taking #money out of the ATM and holding #cash = smart. You could always redeposit

.@Hamstedt1 you need to get in a queue at the atm, like people in Cyprus & Greece had to #DeutscheBank

As Ben Bernanke stated, the only reason people invest in gold is to protect themselves against “really really bad outcomes”. If Deutsche Bank collapses, it could kick off the collapse of the global financial system – just like Lehman Brothers did in 2008. If banks and billionaires who are ‘in the know’ are now buying gold to safeguard themselves, this is surely a warning to the rest of us. Yet for many people, there’s little to do but just sit back and watch. While there are ways the average investor could buy gold, the logistics are often complicated, and you’d need at least £1000 to buy just one ounce.

Once again, the banks are screwing us over, and ensuring there are very few ways we can protect ourselves.

– Read up on The Telegraph‘s “How to invest in gold”.

– Read Money Week‘s “A beginner’s guide to investing in gold”.