Theresa May plans to opt out of the European Court of Human Rights, just as it launches an investigation into HER - The Canary 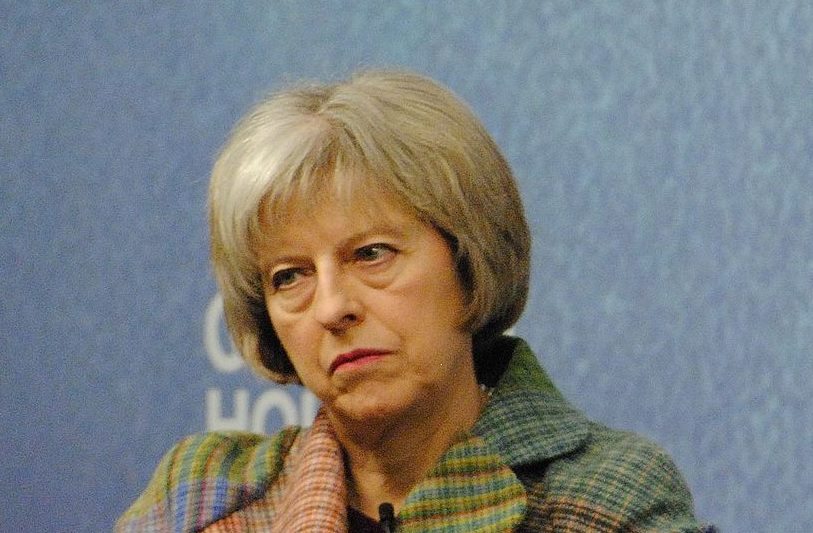 At the Conservative Party conference on 4 October, Defence Secretary Michael Fallon laid out plans to allow the military to opt out of the ECtHR in future conflicts. The measure is a reactionary one, formulated in response to current investigations into UK military actions during the country’s invasions in Afghanistan and Iraq.

These investigations have cost the Ministry of Defence over £100m since 2004.

Fallon’s announcement follows May’s disclosure on 2 October that, as part of the Brexit deal, the UK will remove itself from being subject to the European Court of Justice (CJEU). The CJEU implements the rules of the EU single market, among other things.

Our rights, and our government’s abuses

But just as the UK government was revealing these changes, a case was brought against its own security agencies by ten organisations, including Amnesty International and the American Civil Liberties Union. The case is being heard at the ECtHR.

Privacy International is also involved in the case – a rights group which initiated a trial against the UK government for illegal snooping with the Investigatory Powers Tribunal in July.

The groups assert that the mass surveillance carried out by the UK’s spy agencies constitutes a violation of our fundamental rights. The complaint, which runs to 115 pages, reads:

The Applicants contend that the scheme of bulk interception and intelligence sharing operated by the UK is incompatible with the rights to privacy and freedom of expression guaranteed by Articles 8 and 10 of the European Convention on Human Rights.

As The Intercept has detailed, the case is the first to be heard by the ECtHR based on evidence leaked by Edward Snowden. The complainants are using the whistleblower’s revelations, first exposed in 2013, as the basis for their arguments.

Snowden revealed the mindblowing spying capabilities of security agencies on both sides of the Atlantic. What these surveillance outfits are aiming to achieve was best summed up by the US National Security Agency (NSA), in an internal slide leaked by Snowden:

New Collection Posture: Sniff it All – Know it All – Collect it All – Process it All – Exploit it All – Partner it All

The “it” referred to here is essentially ‘the electronic communications of the world’. And as the NSA makes clear, these spies want ‘it all’, and they’re willing to share what they find with ‘partner’ agencies. As a member of the Five Eyes alliance, the UK is one of those partners.

Little was confirmed about the practices of these trans-Atlantic spying agencies before the Snowden leaks. He revealed what our governments were doing without our knowledge. That is why, in the US, there is a concerted campaign underway calling on US President Barack Obama to pardon Snowden before leaving office in November.

Snowden remains in Russia, where he has been given asylum, following a US-led manhunt that forced him to stay in the country. Numerous high-profile figures, including ex-presidential hopeful Bernie Sanders and the Pentagon Papers whistleblower Daniel Ellsberg, are calling for Obama to allow the whistleblower to return to the US, with minimal or no penalty.

Following Snowden’s revelations, some of the authorities that had legitimised the NSA programmes were scrapped in the US. The changes were modest, but they happened.

In contrast, the UK government’s reaction to the leaks was to double down on the practices. While May was Home Secretary, she introduced the Investigatory Powers Bill, which aims to enshrine mass surveillance in law.

One such surveillance tool used by UK spies is called “Tempora”. As of June 2013, when The Guardian reported on the programme as part of the Snowden leaks, Tempora had been in operation for 18 months. Through this programme, spies are able to access massive amounts of electronic data by tapping into the underwater cables that information travels through.

Tempora scoops up everything that passes through it, emails, telephone calls, access to websites, and social media activity. It is not a programme that discriminates solely against the guilty. It hoovers up everything it can.

The government controls the governed, but must also control itself

Programmes like Tempora ensure that all citizens are ensnared in the surveillance net. But as the complainants in the ECtHR are arguing, this is surely not compatible with our fundamental rights. It’s very hard to see how the right to privacy (Article 8) and the right to freedom of expression “without interference by a public body” (Article 10) can be upheld in a mass surveillance society.

As a country currently subject to the ECtHR’s rulings, which are legally binding, it is now up to that court to decide whether the UK government is properly honouring those rights.

The ECtHR exists to ensure protection of our most basic rights. Without it, any government could sweep those rights away. And with a government in the UK determined to scrap the Human Rights Act, an attempt to do so would come as no surprise.

– Take action against surveillance with the Open Rights Group.

– Email your MP to share your thoughts on mass surveillance in the UK.