Asian hornet spotted for second time, and the implications are severe - The Canary 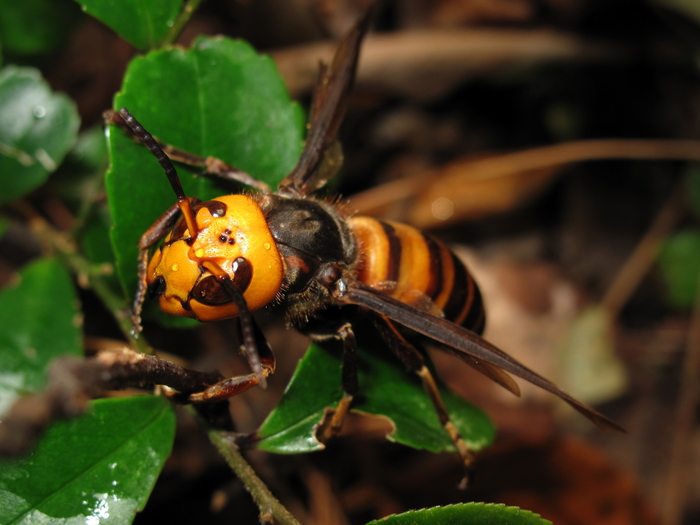 The Asian hornet has been spotted for the second time in the UK, this time in North Somerset. The invasive species was spotted for the first time in Gloucestershire, when a nest was found and subsequently destroyed.

Asian hornets are a threat to native honeybees. They wait outside the entrance of a beehive and, as soon as a bee comes out, they bite its head off. And they do this until all the bees are dead, at which point they go inside the hive and take the honey. Several Asian hornets can destroy an entire hive population in a couple of hours. This has led experts to take any spotting of Asian hornets as a very serious matter indeed.

The number of honeybees are dwindling

Last year, more than 14% of England’s honeybee colonies died over the winter, and there is a general decline in the number of honeybees in the UK.

The Royal Horticultural Society highlights the threats to native honeybees, including parasitic mites, diseases, and neglect by beekeepers. Brexit could also result in the re-introduction of neonics in the UK, a type of pesticide that has also been singled out as a serious threat to bees.

It seems that honeybees in this country are facing a multitude of threats to their health and existence. And a potential influx of Asian hornets could turn a decreasing population into a vanishing one. But how severe would this be for us as a country?

We owe a lot to these pollinators

Research has pointed out that honeybees play a pivotal role in pollinating many crops. The fact that honeybees provide just a quarter of the pollination in the UK (the second lowest among 41 European countries) means that food security in the country is at serious risk.

The disappearance of a single native species can have wide-ranging and disastrous consequences for people. The British Beekeepers Association states that one third of the food we eat would not be available if it weren’t for bees; they pollinate the flowers of many plants that feed animals (which we, in turn, rely on); and the economic value of honeybees is estimated at over £200m per year.

As far as important species go, they are at the top of the list. From a global perspective, they pollinate 70 of the 100 crops that feed 90% of the world.

How big a threat?

But there is also a danger of being too alarmist about the issue of decreasing bee populations. The disappearance of bees does not necessarily imply the extinction of the human species. But research does indicate that their disappearance – or a significant reduction in their worldwide population – would have major implications for our diet, and therefore our health. The variety of foods would diminish, and the price of certain products, such as coffee, could skyrocket.

In light of the Asian hornet spotting, Nicola Spence, from the Department of Environmental Food & Rural Affairs, said:

We have been anticipating the arrival of the Asian hornet for some years and are implementing our well-established protocol to eradicate them and control their spread.

The Asian hornet poses no direct health risk to humans; in that, being stung by one of them won’t cause more damage to you than a bee sting. But the threat they pose to bees could cause major harm to us in the foreseeable future.

– See this video on The Death Of Bees Explained – Parasites, Poison and Humans.