Jeremy Hunt lays out the government's new plans for the NHS, and they're an absolute disaster - Canary 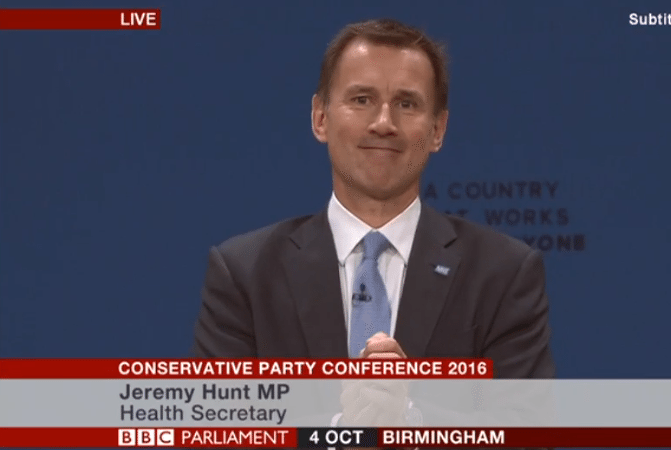 Health Secretary Jeremy Hunt addressed the Conservative Conference on 4 October, and his new plans for the NHS are nothing short of a disaster for everyone working in it and everyone who depends on it.

As expected, he outlined controversial proposals to limit the number of foreign-trained medics and called for junior doctors to deliver ‘safer care’, but failed to mention the searing cuts he plans to impose. These will follow on from billions of pounds cut during the Cameron and Osborne administration. Starved of funding and struggling to stay afloat, the idea that the NHS “is broken” will be fundamental to the Conservatives’ argument for privatisation.

On the morning of 4 October Hunt’s address, a conference event took place in the ‘Think Tent’, a venue near the main centre. The event was entitled ‘Putting Patients First: Is the NHS delivering?’ and was hosted by a right-wing thinktank called the Institute for Economic Affairs. The IEA hosted a number of events during the conference. 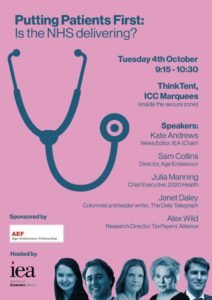 The IEA has longstanding links to Conservative Party policy, and was instrumental in forging much of Margaret Thatcher’s direction. A great deal of that revolved around privatisation, and it is widely perceived to be one of the most influential thinktanks in the world.

The IEA – ‘abolish the NHS’

Bearing in mind its influence on such issues as the tobacco industry, cuts to essential services and the abandonment of public well-being, the IEA’s position on the NHS is unsurprising. It wants the service to be sold off.

In January 2012, IEA director Richard Wellings published a paper entitled ‘How to abolish the NHS’. It begins with a complaint:

Before going on to suggest solutions, he states:

the compulsory licensing of medical professionals should be abolished. Anyone should be at liberty to practice as a doctor or nurse, with patients relying on brand names or competing voluntary associations to ensure quality…

Wellings’ ideas have been adopted by others in the institute and recently developed upon. Dr Kristian Niemitz, an economist who is the IEA’s head of Health and Welfare, spoke to the Oxford Economics Society in 2015 in a lecture entitled ‘Why the NHS should be abolished’. During the speech, Niemitz wrote off public concerns and justified the IEA’s proposals. He said:

Eulogies for the NHS can very quickly sound parochial and insular… universal healthcare is not a very special achievement, it’s nothing to be especially proud of.

The IEA’s behind-the-scenes influence provides compelling evidence for the motivations behind six years of savage attacks on the NHS. It is part of a classic Conservative strategy which the IEA has promoted tirelessly – withdraw funding so services are stretched, then claim such services are failing the public, then privatise as a ‘solution’. From this, one thing is clear: anyone who believes our NHS is safe in the hands of the Conservative government needs to think again.

– Join the campaign to keep the NHS public here

– Support The Canary so we can continue to bring you the news that matters, here.