A council is trying to evict 60 homeless people, in a move that is nothing short of shameless - Canary 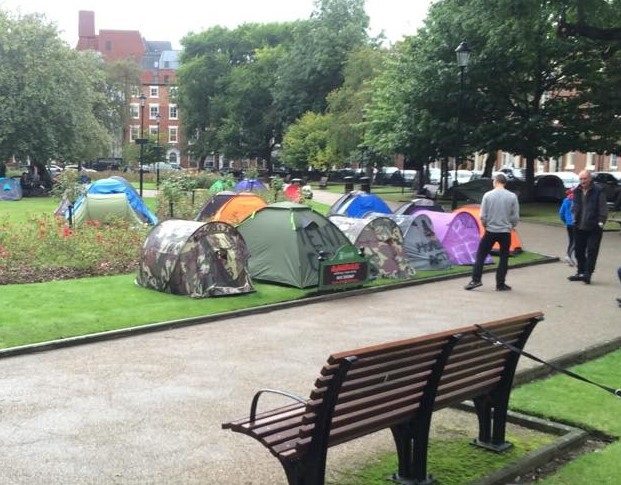 A council has tried to forcibly evict a group of homeless people from the centre of Leeds by taking them to court. The Labour-controlled city authority also wanted an injunction to stop them living anywhere else. But the council has come under heavy criticism, because the people are not sleeping on private property, but in tents and in public spaces.

The court, however, has granted the group of around 60 homeless people six weeks on another site in the city, and ordered Leeds City Council to ensure that the people are accommodated in this time.

A battle of statistics

The “Tent City“, as it is known, was originally set up on 21 September outside Leeds Art Gallery. It consists of salvaged tents and sleeping bags from the summer music festival held in the city. When it moved to its second site in Park Square, which is home to many of the city’s law firms, the council stepped in with court action. But today’s ruling will see it move again, to the former site of the international swimming pool.

Leeds Homeless Action Group (LHAG), which has organised the Tent City, claims it is providing a safe space for the city’s homeless, as well as protesting against the lack of action by the council to tackle homelessness. It is continuously staffed by volunteers, who distribute donated clothing, food and hot drinks to homeless people sleeping in the tents.

Haydn Jessop, one of the protest’s organisers, said that by organising everyone into the same area, it effectively highlights the problem of homelessness:

When you get off the bus on a morning on your way to work, you only see one or two homeless people… We’re trying to show people the true numbers affected and the real statistics. This camp is helping to bring people back into a safe place at a time when more and more have had to go to areas which pose a danger to their safety.

The council says that, while “good intentioned”, the organisers have made “inaccurate claims” about the scale of the problem in Leeds. But LHAG insists that figures by the Department for Communities and Local Government massively underestimate the scale of the problem. These statistics show that 13 people were sleeping rough in Leeds in Autumn 2015, down from 15 the previous year, and Leeds City Council asserts that LHAG is essentially confused because of the difference in meaning between “homeless”, “rough sleeper” and “beggar”:

Accommodation is available in the city and offers are made to rough sleepers on a daily basis but for a variety of complex reasons some will refuse a place to stay.

Jessop refutes this. He and LHAG say that a ‘yellow and red card’ warning scheme has displaced countless people from the city centre. Currently, if someone is caught begging the public for cash, they are issued with an amber-coloured paper, warning them not to repeat their actions. If they are then caught again, a red warning is given which bans them from the city centre for 48 hours. And if they still continue to beg, the individual may then be arrested.

Leeds: where homeless people are the norm

Rough sleeping statistics are compiled by taking a “snapshot” in an area of a local authority on one given night, once a year between 1 October and 30 November. It is hard to gauge whether the figures are truly accurate. But what is factually true is that Leeds has one of the biggest homelessness issues in West Yorkshire.

Figures for the financial year 2015/16 show that Leeds had 8,368 officially homeless households; a 28% increase on the previous year. This meant a homeless rate of 25 per 1,000 households when the national average is nine. The figures for neighbouring local authorities were:

As is evident, the scale of homelessness in Leeds is greater than any neighbouring local authority. It is perhaps this which LHAG wishes to highlight with the Tent City.

We continue to work with a range of partners, including the police and charities to tackle homelessness and rough sleeping in Leeds. We also work with partners to try and ensure that the health and well-being of anyone in housing need is addressed.

But Jessop, himself once homeless, disagrees:

I was lucky, in the fact that I moved away from Leeds and was able to sort myself out. Now that I’m in this position, I have to give something back to a cause that has touched my heart. There’s not enough going on for the homeless community and the big charities are just profiting off the homeless. They’re taking wages before they are even helping anyone in destitution. That’s what we’re trying to stop.

This decision of the court will go some way to help those who are rough sleeping or homeless in Leeds. But it is combined action from all involved parties that is needed to begin to really address the complex issues resulting in homelessness and rough sleeping. Meanwhile, the fact that a Labour-controlled local authority chose to use public money to remove homeless people from public land should be called out for what it is: a disgrace.

– Support the crowdfunder for the Leeds Tent City.