Nigel Farage is back, and Twitter's response is perfect [TWEETS] - Canary 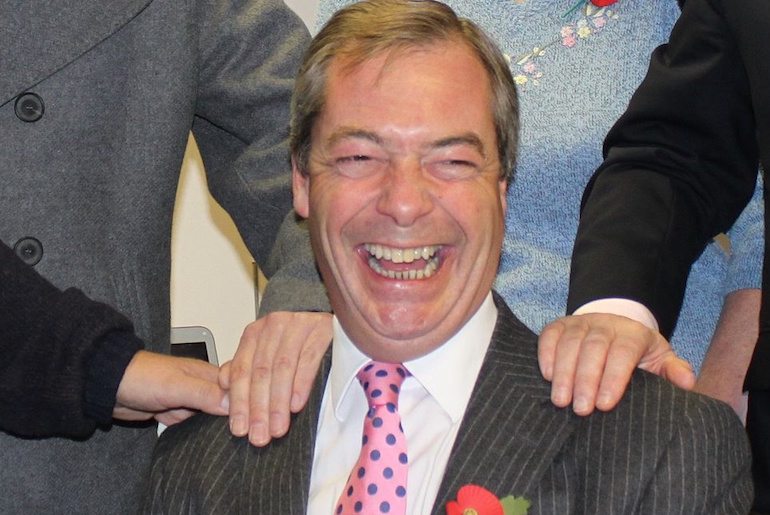 Nigel Farage has returned as UKIP leader just 18 days after Diane James took over running the party, and the response from Twitter has been hilarious.

Farage resigned after the EU referendum, claiming he wanted to retire while still enjoying his salary and benefits from being an MEP. But since James’s sudden decision to quit, he has confirmed he will continue as the interim party leader.

Since announcing his return, Farage has been trending on Twitter. Some compared him to a horror film:

As with all good horror films, the villain is never actually dead the first time. Here's Nigel! #Farage #UKIP https://t.co/7fOulOV0xq

Own up… who said @Nigel_Farage 3 times?#UKIP

Others thought he was more like a bad smell that just won’t go away:

Nigel Farage is like a Bad smell around a Sewage Factory, You can't get rid of the fecking thing.

And others thought him more akin to an infectious disease:

Nigel Farage proves he's the human embodiment of herpes,as yet again when we think we've got rid of him is back leading UKIP again #farpes

Others speculated it was because his family wanted to spend less time with him:

POLITICS: Nigel Farage set to return as UKIP leader as reports suggest his family want to spend less time with him.

And then there were just those good, old-fashioned lavatorial comparisons:

Nigel Farage is like that turd that just won't flush.

While humorous, the derision in these tweets does have a serious side. Farage’s return to the helm of the party comes just as a report from the European Commission against Racism and Intolerance (ECRI) has slated UK papers and politicians for fuelling the rise in hate crime, racism, and xenophobia.

Farage, alongside David Cameron, is one of the politicians cited in this report. This should come as no surprise when Farage’s campaign to leave the EU consisted of threatening violence, scaremongering racist posters, and Islamophobia.

Following the referendum, there has been a 57% rise in hate crime. And as this report shows, politicians and the tabloid press must accept responsibility for stoking the xenophobic nightmare that has been unleashed on this country.

We have just celebrated the 80th anniversary of the anti-fascist Battle of Cable Street. Farage’s return, Theresa May’s attempt to take the Tories even further to the right, and these hate crime figures all show that there is an urgent need to combat fascism in the present, in memory of those who have fought it in the past.

– Take action against racism and support the Anti-Fascist Network.