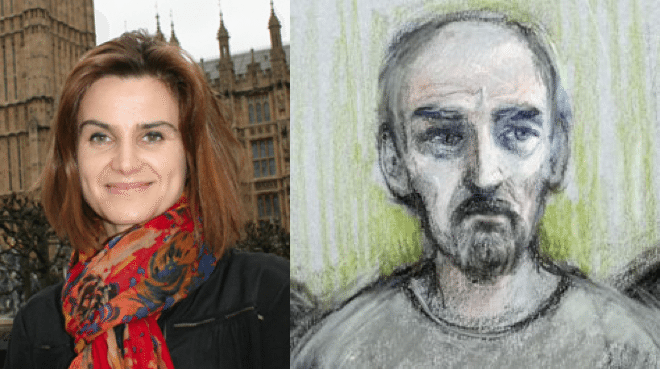 The man accused of murdering Labour MP Jo Cox had his first court date on Tuesday 4 October, and insulted her memory by failing to enter a plea.

Thomas Mair, who is alleged to have murdered Jo Cox on 16 June 2016, appeared in court on 4 October. His appearance was to enter a plea in relation to charges of  the murder of Cox, possession of a firearm and a dagger with intent to cause an offence, and grievous bodily harm to a passerby, Bernard Kenny.

But Mair, appearing via video link from Belmarsh prison, refused to enter a plea and stayed silent throughout the hearing at the Old Bailey. Mr Justice Wilkie, presiding, asked Mair to confirm that he had heard the charges being read out. After Mair failed to respond, Wilkie directed that not guilty pleas be entered on his behalf.

Mair is accused of the murder of Cox, a mother of two children. She was stabbed and shot on 16 June as she arrived at a surgery in Birstall, part of her Batley and Spen constituency in West Yorkshire.

A by-election is to be held on 20 October, with actor Tracy Brabin running as the Labour candidate for Cox’s former seat. The former Coronation Street, EastEnders and Emmerdale star was chosen as the party’s candidate ahead of Jane Thomas, an environmental campaigner. Brabin, who was born in Batley and worked with Cox on her campaign to save the town’s library, said:

Jo was my inspiration. I intend to do her proud… Obviously no-one wanted this, but I’m the only person on the ballot paper that can stand up for everyone in Batley and Spen. I’m hoping people will put party politics to one side and we can work together.

The Conservatives, Liberal Democrats and UKIP will not be contesting the by-election, as a mark of respect. But the ‘English Democrats’ have said that their deputy chairman, Therese Hirst, will be standing. Jack Buckby, meanwhile, will stand for ‘Liberty GB’. Therefore, an election will have to be held.

A memorial fund, set up in memory of Cox, has raised nearly £2m since it was launched.

Mair, a 53-year-old unemployed gardener from Birstall, will stand trial next month.