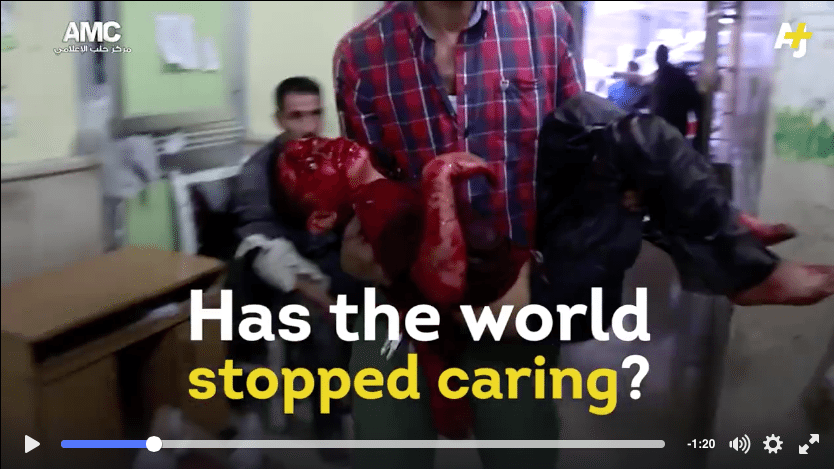 WARNING: This article contains disturbing images. The purpose of sharing them is simply to convey the fate of innocent civilians caught up in the Syrian conflict.

The horror currently being meted out on the residents of one Syrian town is almost inconceivable. People fortunate enough to still be alive are tweeting their experiences along with the hashtag #HolocaustAleppo. A look at these 90 seconds of footage from Al-Jazeera shows why this description is no exaggeration, and why we must not look away.

From civilisation to destruction

Before the disastrous civil war began, Aleppo was Syria’s most populated city – a vibrant heartland rich in culture and history. It’s one of the most continuously inhabited regions on Earth, with human settlements dating back to the sixth millennium BC, and it stands at the end of the old Silk Road, a nexus of international trade and development for centuries.

But since 2012, Aleppo has become a key battleground for one of the bloodiest attacks in the Syrian civil war – as government and opposition forces attempt to seize full control of the city. As The Canary’s Sophia Akram wrote in September:

Aleppo has been subject to a deadly offensive by the Syrian regime and rebel forces in the ongoing Syrian conflict. While eastern Aleppo remains under rebel control, there has been a major campaign to regain the area by the Syrian military, Iranian-backed Shiite militia and Russian warplanes.

The campaign has taken its toll on residents trapped inside eastern Aleppo, according to a report by Save the Children. One hospital claimed that 43% of the injured were children. And a member of the ambulance crew with Syrian NGO Shafak said that more than 50% of the casualties they picked up in a 48-hour period were children.

These before and after images shared originally by Bored Panda speak to the downfall of a once great city, almost overnight: 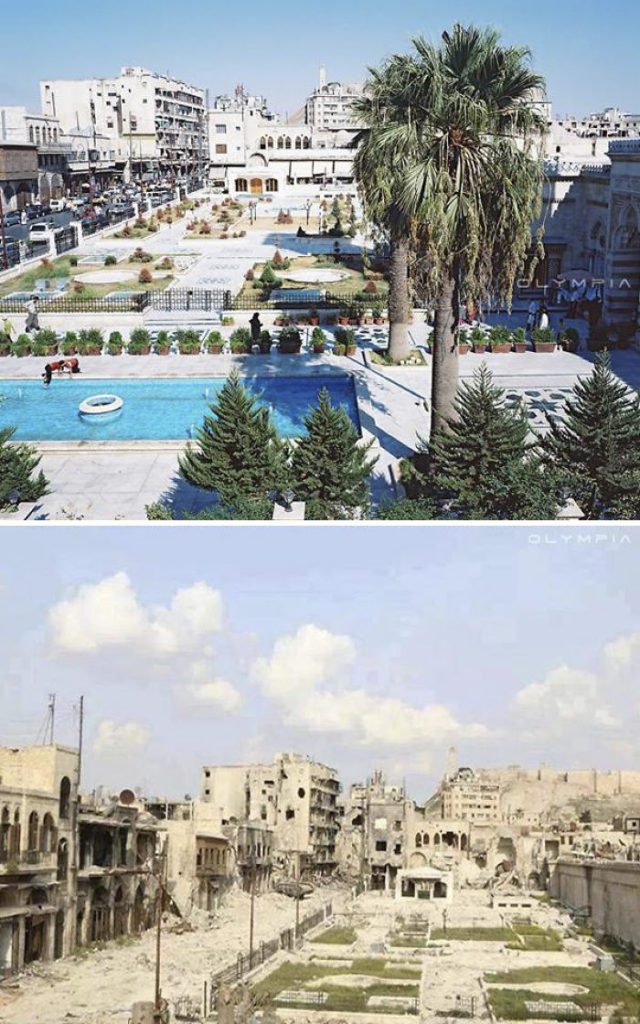 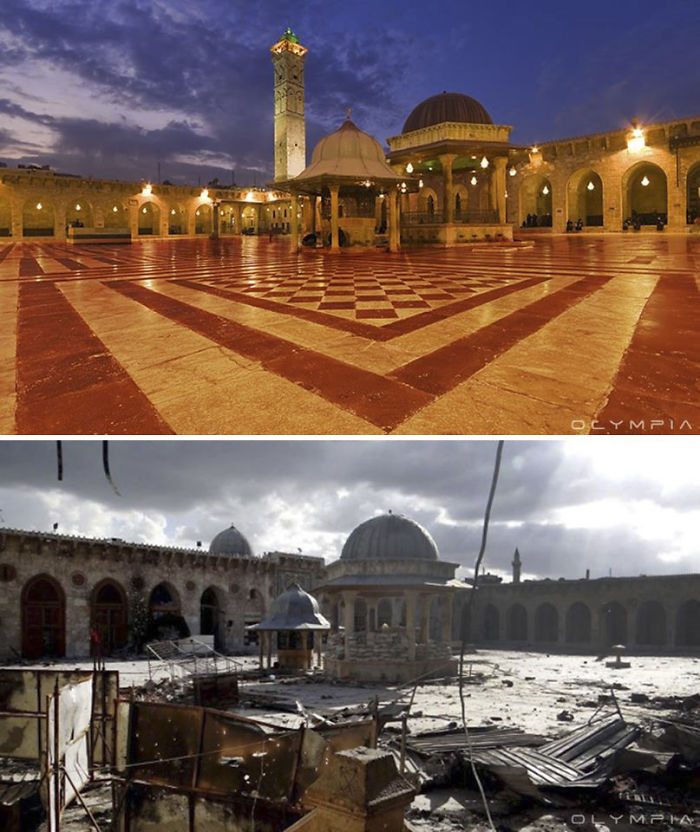 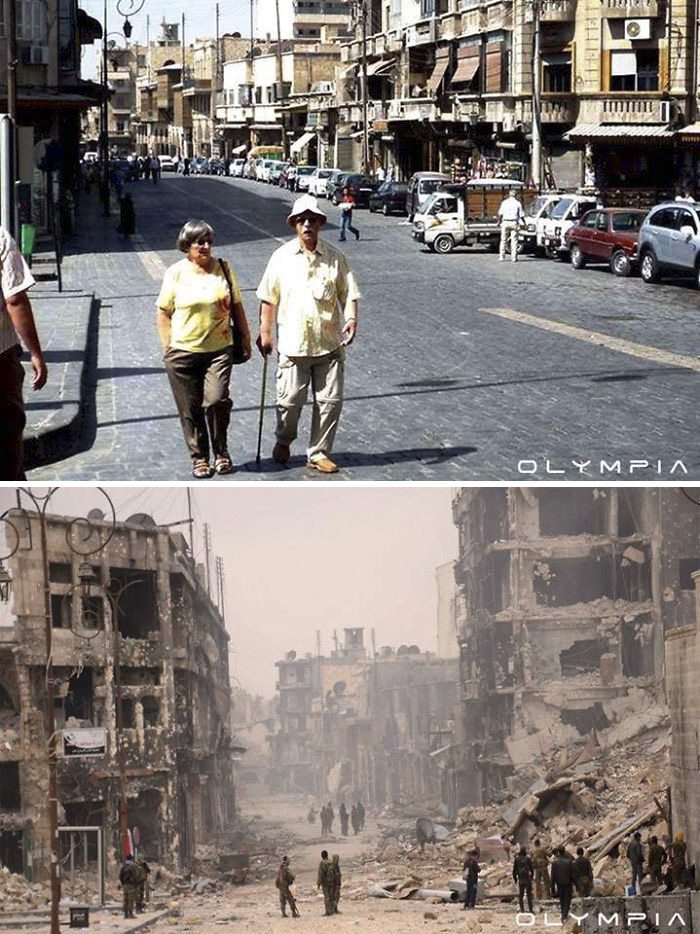 The people who called Aleppo their home have either been killed, displaced to refugee camps across the region and the world, or find themselves trapped in the middle of a war zone, hoping the next bombs will not fall on them.

Innocent children caught in the middle

Tragically, more than a third of these people are children:

#Aleppo: Doaa ,2 years old, Falled from balcony after an airstrike. She still in coma. Pray for her. #holocaustaleppo @sahloul @sams_usa pic.twitter.com/qVnCqcJMVQ

Inaction of world community in face of #holocaustaleppo by Assad & mullahs is simply beyond description.Where is humanity? #Iran #No2Rouhani pic.twitter.com/wZKvR2eo1S

#HolocaustAleppo this little girl have much to say about the world silence and #Aleppo pic.twitter.com/S9PrjIxisX

As The New York Times reports:

They cannot play, sleep or attend school. Increasingly, they cannot eat. Injury or illness could be fatal. Many just huddle with their parents in windowless underground shelters — which offer no protection from the powerful bombs that have turned east Aleppo into a kill zone.

Among the roughly 250,000 people trapped in the insurgent redoubt of the divided northern Syrian city are 100,000 children, the most vulnerable victims of intensified bombings by Syrian forces and their Russian allies.

Though the world is jolted periodically by the suffering of children in the Syria conflict — the photographs of Alan Kurdi’s drowned body and Omran Daqneesh’s bloodied face are prime examples — dead and traumatized children are increasingly common.

The use of extraordinarily high-powered ‘bunker buster bombs’ means that even underground shelters no longer provide protection from the bombings, and the eastern section of the city now has fewer than 50 doctors left to treat the swathes of sick and injured people. The government-controlled western part of Aleppo has also reportedly seen civilian deaths.

And all the while, world powers are either contributing to the horror or failing to take action which could save the Syrian people from a war they neither asked for nor deserved to have wrought upon them.

– See other international articles from The Canary and learn more about Aleppo and the Syrian conflict.

– Write to your MP to pressure the British government to step up its efforts to find a peaceful resolution to the conflict in Syria.

– Contribute to humanitarian relief in Syria by supporting charities like:

– Learn more about human rights abuses in Syria through the website of the Independent International Commission of Inquiry of the Syrian Arab Republic.