As the Chancellor gloated about his government's 'economic success' today, news broke of an utter disaster - Canary 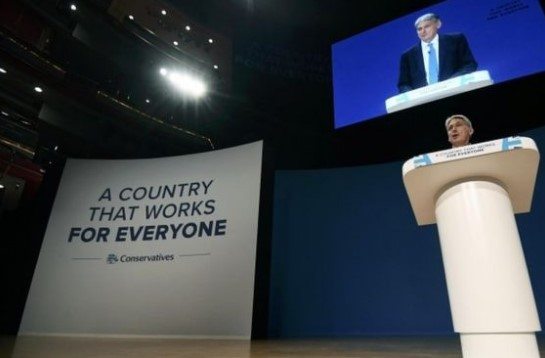 On Monday 3 October, Chancellor Philip Hammond boasted that the Conservatives were “the most successful party in British political history”. Speaking at the Tory Party conference in Birmingham, he said it would “build a country that works for everyone”. But just how Hammond measures ‘success’ is debatable. Because new figures reveal that child poverty has spiralled out of control under the Conservatives – with a quarter of a million children plunged into low-income households in just a year.

Data from the tax office (HMRC) shows that, in 2013/14, the number of children living in low income households rose from 2.5 million to 2.75 million. This means that one in five children, or 20%, are now classed as living in poverty.

What the data also reveals is that it’s not just families on benefits where children live in poverty. HMRC said that the number of children in families in receipt of out-of-work benefits fell by 162,000 between 2013 and 2014. But what has put more children into poverty is the rise in low wages. HMRC said that the low-income threshold, which is 60% of the average national income, rose from £218 in 2013 to £253 in 2014. The rise was due to higher wage growth in well-off families.

As The Canary previously reported, Oxfam identified in September that the wealthiest top 1% of Brits own 20 times as much as the poorest 20%. In other words, 634,000 people versus 13 million. It also identified that Britain’s richest 10% own over half the country’s wealth (54%). It stated that “the UK is one of the most unequal developed countries in the world”, citing a report from the Organisation for Economic Co-operation and Development (OECD).

These figures tie in with analysis released by the Trades Union Congress (TUC) into the pay gap in the UK. As The Canary previously reported, the TUC report showed that, while an average worker’s wage was just £27,645, it was £3.4m for FTSE 100 directors. And the highest paid boss earned a staggering £70m in 2015. That’s the equivalent of £38,437 an hour.

Child poverty: spiralling out of control

The HMRC data shows that child poverty is spiralling out of control. In July, the Institute for Fiscal Studies (IFS) forecast that child poverty rates were expected to rise between 2015-16 and 2020-21, meaning that 2.6 million children (18.3%) would be living in the most deprived of conditions measurable by 2020. And as the IFS report concluded:

The “new poor” tend to live in households where there is someone in work. Only a third of children below the government’s absolute poverty line now live in a workless household – two thirds of those classified as poor are poor despite the fact that at least one of their parents is in work.

This new research by HMRC indicates that the IFS forecast may well have been a gross underestimate.

It is deeply shocking to see that 250,000 more children are living in low income households including families who are in work. Our children should not pay the price for the Tories’ failing austerity agenda. Under Labour we made great leaps towards ending child poverty. This government’s warm words will no longer disguise the misery their policies are inflicting.

Hammond finished his speech to the Tory Party conference by saying:

When future generations look back on our decision in 2016, they will see not the end of an era but the beginning of a new age. Not a country turning inward, but a nation reaching out… decisively, confidently to grasp new opportunities. A bigger, better, Greater Britain. Truly, a country that works for everyone.

But with child poverty out of control, 3.9 million people in ‘persistent poverty’ for at least two years, and the overall poverty rate sitting at 16.8%, his words will mean little to the millions of families struggling in the UK today. When the Tories speak of a country “that works for everyone”, they don’t seem to mean millions of children.

– Support Save the Children UK.