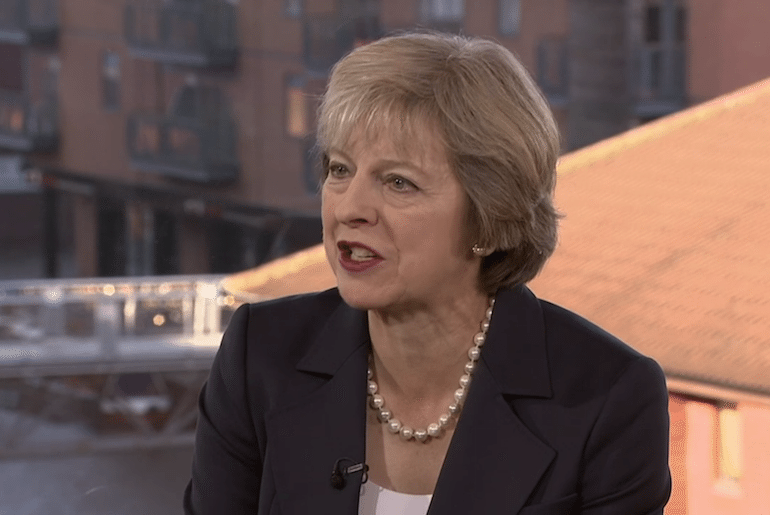 Prime Minister Theresa May convened the Conservative Party conference in Birmingham with an appearance on the Andrew Marr Show. First aired on 2 October on BBC1, the former Home Secretary put in a professional performance, but one that provided worrying indications. For a nation still wondering what sort of prime minister she’ll be, early signs appear grim.

May’s new slogan – ‘a country that works for everyone’ – forms the centrepiece of Tory conference week. In a clear attempt to distance herself from the old-Etonian/Bullingdon Club image of David Cameron’s overt elitism, she has presented herself as the leader of “ordinary, working class” people. Her claim to represent those who “are making ends meet, but only just” was repeated back to her by Marr, enabling May to repeat scripted soundbites about ‘meritocracy’.

Yet those with longer memories will recall similar examples of speech-making and spin. Just six years ago, David Cameron’s announcement of ‘The Big Society’ purported to be about empowering communities and individuals. Cameron even claimed it would be:

the biggest, most dramatic redistribution of power from elites in Whitehall to the man and woman on the street.

Yet it ended in 2016 with the UK as one of the most unequal societies in the developed world.

May’s commitment to a so-called ‘hard Brexit’ is alarming enough, pandering to right-wing factions within her own party while ignoring the reality that 48% of the country voted against it altogether. She has also appointed hardliners such as David Davis and Liam Fox into key positions, despite her centrist rhetoric. But it’s on the issue of education that she has clearly pinned her colours to the mast.

Her fondness for returning to a selective, grammar school system (much criticised from all corners) received only gentle inquisition from Marr. May repeated her vision for a “great meritocracy” and said that she also wanted to encourage academies and free schools (which have been controversial developments in themselves). Her justification for this will assuage anyone who believes May offers a new way:

It’s about ensuring that young people are given the opportunity to develop their talents… We’ll be building on the academies and free schools, bringing those forward and continuing those… we’re changing the rules on faith schools to see more of those being set up but I also want to remove the ban, at the moment we have in our system, a piece of legislation that says you cannot set up a selective school.

When further questioned by Marr on how she would ensure that such selection was fair, May was unable to give a satisfactory answer:

It could mean a variety of things. We’re consulting at the moment as to the best approach in this.

A heart which beats pure blue

Since the Thatcher years, the core of Conservative politics has been the free market; whatever the issue, simply remove impediments and let competition run its course. The problem with this is that the competition is inherently unfair. Some start with significant advantages, and others don’t stand a chance.

The damage this ideology has wreaked on our economy and society over the last three decades is clear. That May seeks to re-emphasise it within education, the only policy area in which she has made a firm statement, stands as a signpost of her political instincts. She may be short on details, but under all the pretty words lies this clear and ugly truth.

– Support The Canary here, so we can continue to bring you the news that matter.