This comedian sums up the final US presidential debate, and he absolutely nails it [VIDEO] 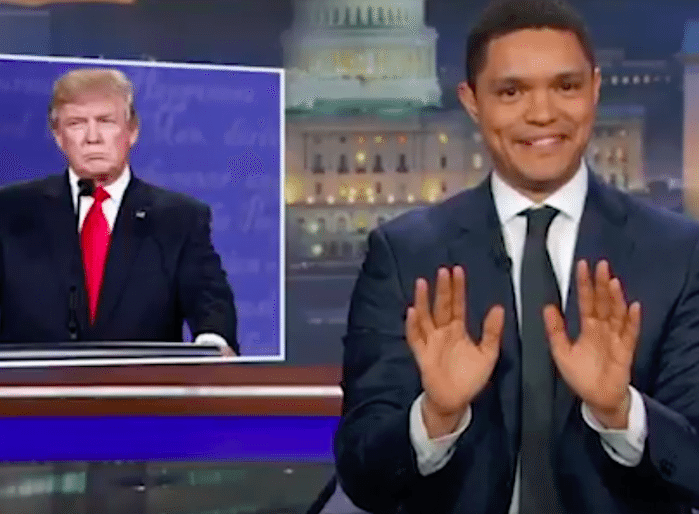 Amid the post-debate analysis for Donald Trump and Hilary Clinton’s final face off on 19 October, comedian Trevor Noah summed up six key moments that have dominated the election race. And he did it in hilarious style.

As Trump and Clinton took to the stage for the third and final time, the US presidential race continued to attract both comedy and controversy. And Noah, presenter of popular satirical programme The Daily Show, drew attention to six key issues.

Noah set the stage with a quip about one of Trump’s guests, Barack Obama’s half brother Malik – who turned on his brother after a docudrama about the President’s life. The Daily Show presenter highlighted the absurdity and irrelevance of Trump bringing Malik along with him, asking:

Do you think, like, Hillary’s looking out going ‘Oh No! It’s Obama’s half brother’?

He continues to mock the situation, before conceding:

Say what you want about Trump, he knows how to orchestrate a spectacle…

And that is definitely what Trump has done throughout the election campaign, attracting billions of dollars of free media coverage in the process.

2) Clinton: Lack of respect for the law?

Next was Hillary’s turn, as a clip showed her walking onto the debate stage in a white trouser suit:

From the very beginning, we saw that Hillary still has no regard for law enforcement in America; this time defying not the FBI, but the fashion police – by wearing all white after labour day!

This may have been a light-hearted joke, but it also reminded us of the email scandal which has lost Clinton the trust of many US citizens.

3) Trump and the Latino vote

Then, Trump’s response to a question on securing the US border gained the floor. Trump rounded off his answer off with:

We have some bad hombres here. And we’re gonna get ’em out.

‘Hombres‘ just means ‘men’ in Spanish. But in context, we could actually see it as a slur against Latinos in America, who he has managed to offend consistently throughout the election campaign. Trump’s words soon inspired both laughs and a new hashtag on social media. Noah also had a field day, saying:

Look at you, Donald Trump! Huh?! Connecting with the Hispanic community there… I feel like… Mexican people at home are going: ‘You know, I know Trump thinks we’re all criminals and rapists – but he said hombres. Yeah! Maybe we’re not so different after all, man!’

Jokes aside, Trump’s words encapsulated both his hardline immigration stance and his poor relations with the growing and increasingly influential Latino community in the US.

Next, Noah noted that Clinton became shifty when pressed about the private emails released by WikiLeaks. She tried to divert attention onto Moscow, claiming Russia had hacked her emails and then given them to WikiLeaks, thus engaging in espionage against the US.

While Noah acknowledged the possibility of Russia’s involvement, he also said:

But now that the information is out there, you can’t just expect us to ignore it by bringing up Russia.

And indeed, Clinton’s attempts to shift blame away from herself may be another reason why many US citizens find it hard to trust her.

would really need to draw deep within his dignity and grace to recover from [this assault from Clinton]. And he did not.

And his failure to respond gracefully to the scandals surrounding him may be why he has been falling in the polls in recent days.

6) Trump on accepting the election results

The biggest shock to debate viewers and commentators, however, was the possibility that Trump would not accept the results of the upcoming election. Debate moderator and Fox News anchor Chris Wallace put to Trump:

I will look at it at the time… I’ll keep you in suspense.

Am I the only one who is super freaked out by this?

This suggestion may indeed have come as a shock to many Americans. But as polls suggest that Clinton is likely to win the presidential race, the US may well have to brace itself for a challenge from Trump when the election results come in on 9 November.