Syria was there for Europeans in their time of need. Now it's time to return the favour [VIDEO] - Canary 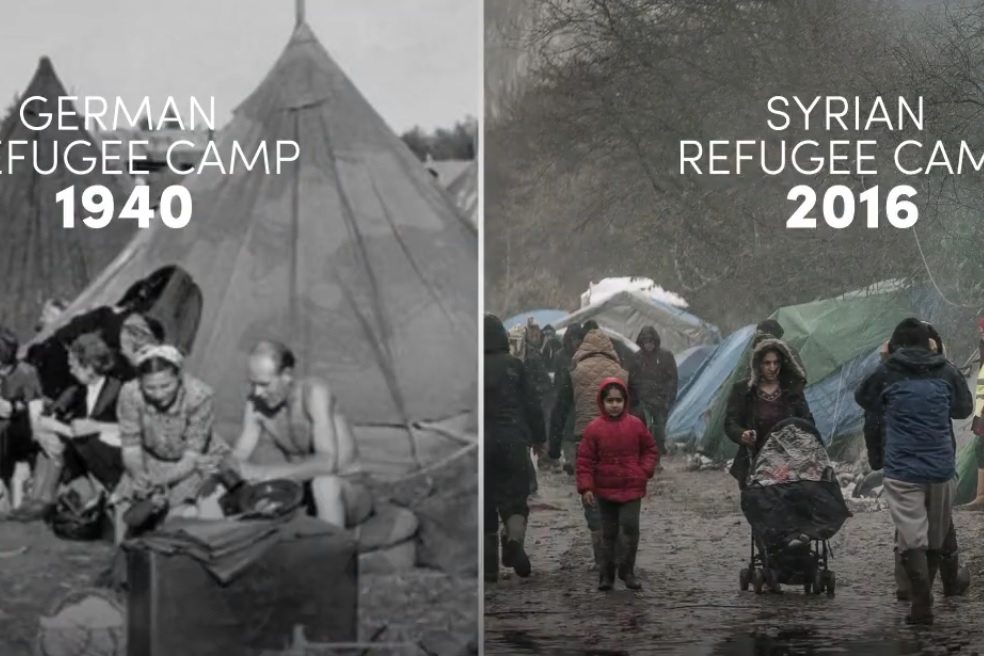 During World War Two, Syria took in refugees from Europe. Like Syrian civilians today, these Europeans were fleeing death, destruction, and ideological persecution. It’s now time to return the favour.

Online news site Mic recently released a video to remind us of this historical comparison. And it’s already received hundreds of thousands of views.

When Syria took in Europe’s refugees

70 years ago, at the height of the Second World War, refugees were moving from Europe to the Middle East – a total reverse of what we’re seeing today. Many of these civilians came from Bulgaria, Croatia, Greece and Yugoslavia.

A combined effort from aid groups and governments bolstered the efforts of the Middle East Relief and Refugee Administration (MERRA), which ran camps across the Middle East that housed tens of thousands of Europeans. Conditions were far from perfect, as we might expect, but the refugees received (at the very least) safe haven from the conflict raging back home.

And as the video above shows, one place where MERRA ran its camps was Syria.

But it wasn’t just Syria

When WWII was over, most refugees in the Middle East either went home or moved elsewhere. In 2000, The Associated Press wrote about how only 12 Polish survivors were still living in Iran.

Learn from history? Or repeat it?

If we look back to the Second World War and the turbulent periods either side of it, we see that Europe has faced massive refugee crises before. And these were arguably equal to or greater than the crisis the continent faces today. Globally speaking, there have definitely been bigger crises since 1945.

In short, there are lessons from the past that we can learn from today. We can build on what worked. We can improve on where we failed.

And some countries really failed in the 1930s. In both the US and the UK, Jewish people fleeing from fascism were demonised and locked out as much as possible. In America, 25,000 refugees could have entered legally each year. But at a time of increased antisemitic persecution in Europe, US authorities only accepted a fraction: 5,532 in 1935; 6,642 in 1936; and 11,356 in 1937. Anti-immigration sentiment gripped the nation. And Congress did all it could to limit the acceptance of foreign nationals. One 1937 poll, meanwhile, revealed that 67% of Americans wanted to keep refugees out of the country altogether.

We could put the negative feelings in the 1930s and 1940s down to media misinformation or insufficient reporting about what was happening to persecuted ethnic groups in Europe. But we could easily say the same today. The only difference is that we now have the benefit of hindsight. We know how the far-right treated Jews and other minorites back then. And we know the horrors that ensued.

Today, people in the UK, the US, and throughout the West need to decide whether that’s a story they want to repeat.

As xenophobic sentiments continue to spread like wildfire throughout the Western world, we have a very clear choice. Will we remember the hospitality of Syrians and others in the Middle East during the Second World War, and learn from our own mistakes? Or will we allow the far-right to keep demonising people fleeing death and destruction, and repeat the tragic mistakes of the twentieth century?

– Support Citizens UK and Support Refugees UK in their work to help refugees.

– Read The Canary‘s previous articles on Syria and refugees.