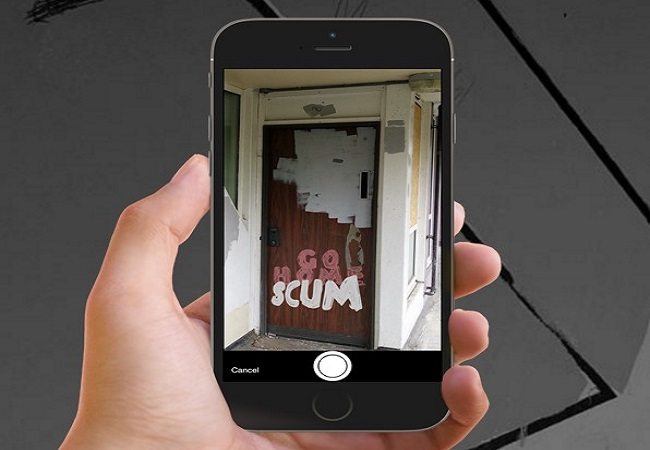 A smartphone app is tackling the growing problem of hate crime in the UK. The Eyewitness app allows users to report incidents anonymously, and more. And its creators hope that it will encourage victims of hate crime to report these shocking attacks.

The creators launched the Eyewitness app last year. But they gave the app a reboot during National Hate Crime Awareness Week in October. The idea is a simple one. The app allows you to report a crime as it happens with a precise location. But it also lets you collect audio/video/photographic evidence and pass it on to the police. And all, the creators say, anonymously.

Speaking to The Canary, Jagwant Johal from Eyewitness said:

Following the five-fold increase in hate crime after the EU referendum, it is essential that we get to grips with this horrific phenomenon affecting people in lots of different ways. Some Eastern European people report being too scared to speak to their children in their own language, through fear of violence. The eyewitness app provides a technical solution capturing evidence and more accurate reporting by using GPS, time and date, and media functions on our smartphones.

Figures released from 31 police forces show a 41% rise in religious and ethnically motivated hate crimes in July compared to the previous year. The police recorded 5,468 hate crimes in July 2016, compared to 3,886 in July 2015. The figures are more telling during the referendum period. The police recorded 1,546 hate crimes two weeks prior to the referendum on 23 June. But in the two weeks following the result, this number jumped to 2,241.

And religious and ethnically motivated crime wasn’t the only area that saw an increase. Figures released by Galop, which supports victims of homophobia, reported a 147% rise in homophobic attacks in the three months following Brexit. Also, research showed that despite the numbers of recorded hate crimes soaring, ‘positive’ outcomes for victims are falling. Just 27% of hate crimes recorded by police resulted in outcomes such as a charge or summons in 2015/16, compared with 35% the year before.

So, the Eyewitness app’s reboot is pertinent, to say the least. The creators give nine reasons for using the app:

The technology used is fairly simple. Eyewitness uses application to application (A2A) software, with user information shared via an Extensible Markup Language (XML). The creators claim the main portal is totally secure, as is the server-based storage. Only official authorities have access to the portal. The company will protect people’s details, unless information has to be legally disclosed. And when people report incidents using their GPS location, police are expected to respect an individual’s anonymity.

With smartphones so popular amongst most generations, especially young people, the Eyewitness app helps link active citizens to police in a safe, secure and streamlined way. This Birmingham-created app could revolutionise police and community relations and the anonymity function can help remedy under-reporting of hate crime and anti-social behaviour. I’m proud to be associated with this Birmingham creation providing UK-wide solutions, and will be supporting its adoption as parliamentary champion.

Eyewitness is free to download for iPhone and Android. And sadly, with hate crime still on the rise in the UK, it seems new technology like the Eyewitness app is needed more than ever.

Watch the promotional video, with a rap composed by Ismael Lea South, Director of the Salam Project:

– Oppose racism on the streets.